A Beloved TV Show Takes a Shot at the Big Screen in ‘Impractical Jokers: The Movie’ 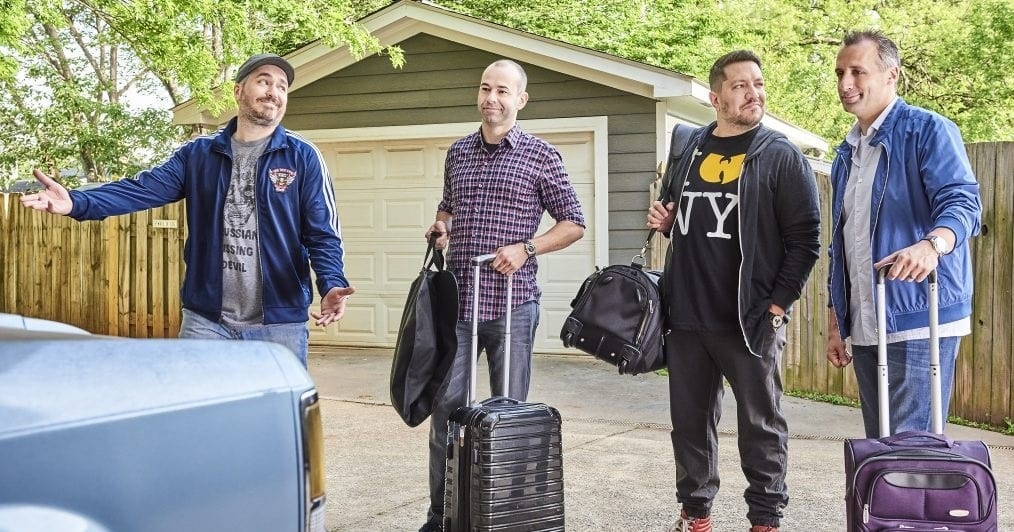 Full disclosure: my family and I are fans of the television program, Impractical Jokers. In fact, on weekends, when my husband is home, it’s on for much of the day. It’s in heavy rotation on truTV, so it’s not exactly challenging to find it on at virtually any given time. Understanding why just a few episodes are repeated ad nauseam, when there are 233 of them, is more difficult. But, I digress.

Going to see this movie, I tried to check my biases at the cinema entrance. I didn’t want to love the movie just because I love the show. Nor did I want to hold the movie to an impossible standard, and judge it more harshly than a non-fan would. Considering my opinion of this movie, I think I managed to find a good balance.

The movie starts by flashing back to an incident from the 1990s, involving our Jokers (Joe Gatto, Brian Quinn, James S. Murray, and Sal Vulcano), and pop legend Paula Abdul.

The 40-something foursome portray their younger selves, decked out in terrible wigs, and classic 1990s outfits. The visuals alone were pretty funny, and earned the first round of chuckles from the audience.

Especially effective was Sal’s combination of a Caesar-esque hairstyle, a Nirvana t-shirt, and a plaid flannel. That’s the look that amused me most, anyway, since I knew about 10 of “that guy” during that era.

The concept of Impractical Jokers (the television show), in case you aren’t familiar, is basically four best friends, “competing to embarrass each other.” They challenge each other to say or do humiliating (and/or risky) things, and if they refuse (or the stranger they’re forced to interact with refuses), they get a loss (thumbs down). Whichever Joker racks up the most losses is declared the loser, and is punished. Punishments are basically harder challenges, where they don’t have the option of refusing.

Where this movie is most successful, as one might expect, is when it sticks to this formula. However, it is also during the challenges where some of the weakest moments come. Some bits fall flat, or just don’t translate well to a movie format.

Challenges: the Good, the Bad, and the “Meh”

The strongest challenge in the movie is arguably one featuring Brian “Q” Quinn at a social media conference. It’s filmed well, and the recurring gag lands every time. Forgive my vagueness, but I don’t want to spoil the jokes.

The biggest disappointment for me, personally, was the challenge with Joe Gatto in a cave. A shame, really. It had all the makings of a legendary bit, but had me squirming in my chair after the first couple of minutes. And not [just] because of the too-large iced tea I was drinking.

There were other moments that were weaker, such as Sal with the picnic table. However, I honestly believe those were designed to be lackluster. Intentionally bad jokes, to paint our leads as awkward people.

The cave challenge, however, started out brilliantly, and just fell apart. It could have, nay, should have been the best part of the movie, and would have benefitted greatly from a tighter edit.

What Does Murr Do, Exactly?

Apart from the challenges, there is also kind of a built-in road comedy, where the Jokers drive from New York City to Miami, Florida. This is more of a movie narrative, versus being just a longer version of the show.

This story does one thing especially well, which is to explore what James “Murr” Murray does with his time away from the others. The question is posed early in the film, and the answers come piece by piece, at the various motels and hotels in which the guys stay.

It is a well-executed idea, and each piece of the answer is absurd to a level fans of spoof comedies will appreciate. You know that gag in Hot Shots, where a chihuahua yips whenever someone goes to sit down? It’s kind of like that. Anytime someone knocks on Murr’s door, something logistically impossible is going on behind it. It occurs a perfect amount of times: enough to be considered a running gag, but not enough to become tiresome.

Paula Abdul is known for many things: singing, dancing, choreographing, and talent show judging, to name a few. So, honestly, I wasn’t expecting a lot from her in the way of acting. She was playing “herself,” but in the usual over-the-top way people playing themselves in comedies do. She is almost the villain of our story, from the viewpoint of the Jokers, and vice versa. It’s chuckle-worthy, to be sure, but not stellar. The motivation for a road trip to Miami could’ve been anything, really.

That said, the use of Abdul’s song “Forever Your Girl” becomes another running gag, and it’s a fairly successful one. The song pops up several times, being covered in various styles. It even appears in the final scene, as part of a cameo from another pop star. Someone I was very happy, but not surprised, to see.

The Paula Abdul parts are amusing, in their way, and tie the past and present timelines together with a petite, perky bow. In all honesty, though, it is one of the weaker aspects of the movie.

If you watch the show Impractical Jokers, you’ll go into this movie with an almost comforting familiarity. It’s like watching people you know on the screen, which is fun, for lack of a better word. However, if you are a fan, you may get a little nitpicky about its shortcomings. There’s a certain level of quality we’ve come to expect from Gatto, Quinn, Murray, and Vulcano. Sometimes, Impractical Jokers: The Movie hits that level, or even exceeds it. More often than not, though, you may end up wishing you were home watching the show on your couch.

Thank you for reading! What are your thoughts on Impractical Jokers: The Movie? Comment down below!

[…] last time I was physically in a movie theater (for Impractical Jokers: The Movie), I saw The Lovebirds’ trailer. I thought it looked cute, and figured I’d see it once […]