A Great Becoming: ‘In the Mouth of Madness‘ and the Perils of Toxic Fandom 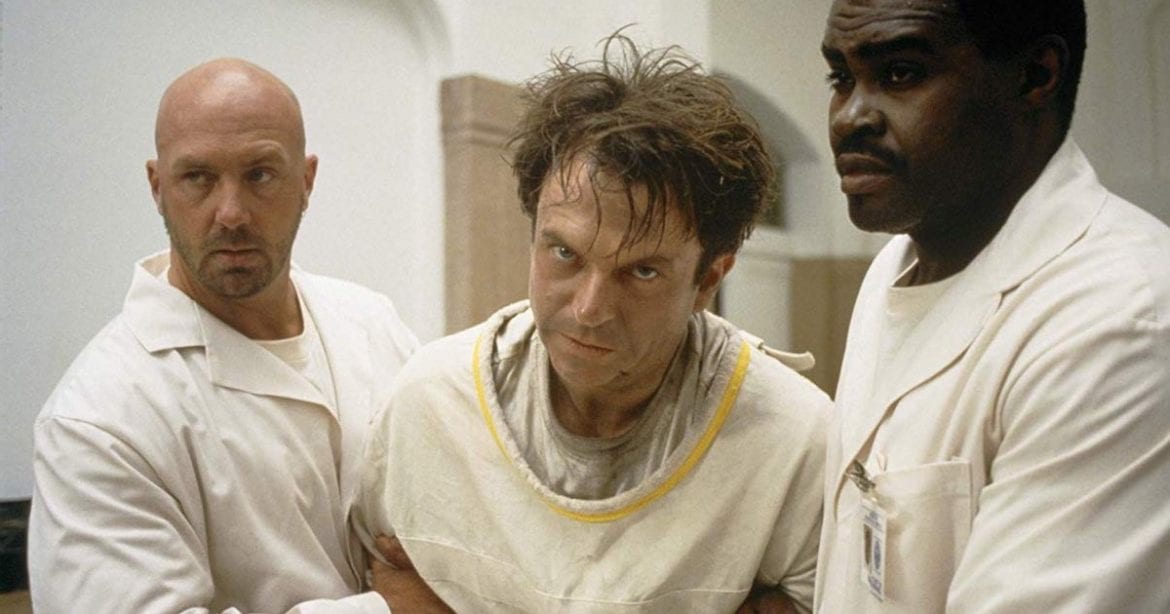 Much like Cameron Crowe, Francis Ford Coppola, and M. Night Shyamalan, John Carpenter all too frequently falls into the category of the “wayward auteur.” The public sees the horror maestro, in other words, as a filmmaker who peaked early on (Halloween, The Thing) and has since descended into unpalatable schlock (Village of the Damned, Ghosts of Mars). But frankly, that’s a reductive and short-sighted way of looking at his or any other director’s body of work. There’s a lot more to Carpenter than his greatest mainstream successes.

Thankfully, much of Carpenter’s later films have undergone a critical reappraisal in recent years. His 90s output, in particular, has gained a considerable cult appreciation. One prime example of this oft-overlooked era, In the Mouth of Madness, slithered its way into theaters 25 years ago last month. It’s a severely underrated look at our fascination with horror. On top of that, it’s years ahead of its time in commenting on the dangers of a rabid fanbase.

Following the disappearance of bestselling horror novelist Sutter Cane (Jürgen Prochnow), cynical insurance investigator John Trent (Sam Neill) goes on assignment for Cane’s publishers. Publishing director Jackson Harglow (Charlton Heston) sends Trent and editor Linda Styles (Julie Carmen) on a quest to find Cane. According to Styles, Cane has developed a reputation for causing psychosis and insanity in his “less-stable” readers. Trent, in fact, had previously been accosted by a demented axe-wielder who turned out to be Cane’s former agent.

The duo stumbles upon the innocuous-looking New Hampshire town of Hobb’s End, supposedly Cane’s hometown and the inspiration for much of his work. Trent, though intrigued, remains convinced the entire mission is an elaborate publicity stunt to drum up interest in Cane’s latest opus, In the Mouth of Madness. That is, of course, until he and Styles discover that Cane’s novels are much closer to reality than they expected.

“When does fiction become religion…?”

The state of the world has been steadily worsening for a while now, and the hellish echo-chamber of social media has contributed to that decline in a major way. It’s allowed fans to swarm en masse upon their beloved intellectual properties, claiming them as their own. Take, for example, the legions of Harry Potter fans who rallied behind J.K. Rowling in the wake of her transphobic Twitter statements. Or the furious backlash of sexist fans against The Last Jedi that prompted Rise of Skywalker director J.J. Abrams to ignore or negate much of the former’s plot.

Toxic fandom can quickly turn ordinary people into, for lack of a better word, monsters. In the Mouth of Madness, then, makes that metamorphosis literal. Cane’s readers quite literally transform into horrific, murderous beasts, Cane the deranged puppet master who authors their mayhem.

On a similar note, the film serves as an exploration of conspiracy theories in literature and how easily the public can get caught up in them. Take, for instance, the scene in which a skeptical Trent first begins reading some of Cane’s work. He slowly develops an appreciation for Cane’s style, which gives way to a series of vivid, bloody nightmares. Before we know it, we see Trent determinedly slicing up book covers and forming them into a map of New Hampshire.

On the car ride to Hobb’s End, Styles tells Trent that she enjoys reading horror stories because she “likes being scared.” Mouth, however, suggests that our culture’s obsession with horror goes a bit deeper than that.

The movie balances that skepticism with a healthy admiration for its source material. Carpenter, obviously a fan of the old masters himself, peppers his film with tributes to classic horror films and novels. He and screenwriter Michael De Luca lovingly knit these references and homages into their story in a way that feels organic, not derivative.

Cane, for example, seems clearly modeled after Stephen King — albeit slightly trashier — where Hobb’s End is an allusion to King’s fictional burg of Castle Rock. H.P. Lovecraft’s influence looms large over the whole affair as well. The movie’s monsters, with their flailing appendages and hideous screeches, resemble Lovecraftian old gods. The film even snags its title from a Lovecraft novella (On the Mountain of Madness) and often quotes verbatim from his work.

We also could read the horrifying transformations taking place throughout Mouth as a parallel to the work of Thomas Harris. Specifically, they mirror Francis Dollarhyde and Jame Gumb’s villainous obsession with changing. Indeed, to paraphrase Dollarhyde, Trent and Styles are made privy to plenty of “great becomings” at the hands of Cane.

“You guys are good.”

Of course, a movie like In the Mouth of Madness would collapse onto itself without the right production quality. Fortunately, having seasoned craftsman Carpenter at the helm ensures that won’t happen.

In terms of emulating the pulp horror atmosphere of a Cane novel, Carpenter’s film is stylistically spot-on from start to finish. Gary Kibbe photographs the scenes with melodramatic lighting and murky, creepy textures, The score, composed by Jim Lang and Carpenter himself, teems with crunchy guitar riffs, “spooky” keys, and blasts of warbling, discordant synths that pop up at every jump scare. The special effects department, which includes legendary makeup artists Robert Kurtzman and Greg Nicotero, brings all the blood, gore, tentacles, razor-sharp teeth and rotting flesh to remarkable, revolting life.

Neill, then hot off the success of Jurassic Park, plays Trent with pitch-perfect snark and casual misogyny. His intact New Zealand accent only adds to his character’s visible disdain for the foolish American pastime of pulp horror. As Styles, Carmen serves as a humanistic, compassionate foil to Trent. Prochnow, meanwhile, plays the reclusive Cane with an insane theatrical flourish — the Mad Monk of Hobb’s End.

There’s no reason horror buffs shouldn’t mention Mouth in the same breath as Carpenter’s more canonical classics. It’s a thrilling, demented piece of work that illuminates the dark human psyche in a way few films do. The journey could drive you insane, but it’s a madness worth embracing.

Thank you for reading! What are your thoughts on In the Mouth of Madness? Comment down below!

[…] from Rainer Krause — the way he says “Maria” will probably be a recurring nightmare I have for the rest of my adult life. Thanks, […]

Get Scared: When Is It Appropriate for Children...