written by The MovieBabble Staff January 1, 2020 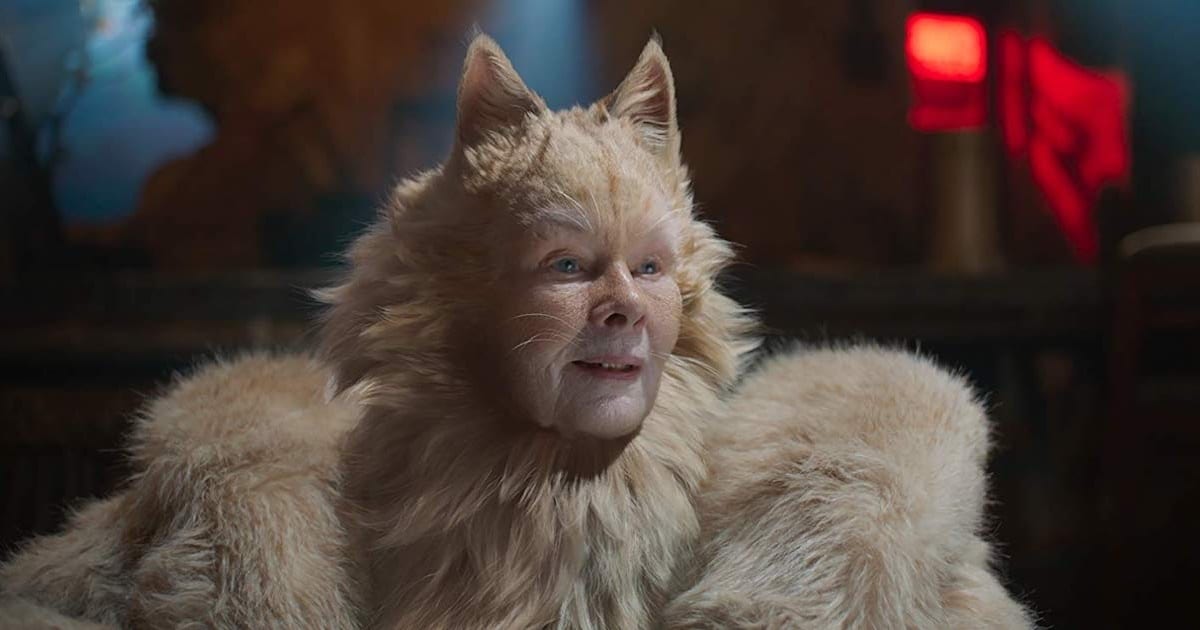 Cats is a lot of things: an eyesore, an acid and cocaine trip, nightmare fuel, you name it. It is not, however, a good movie. If anything, it’s a great reminder that Tom Hooper is vastly overrated…and that maybe some plays should stick to the stage. (Please.)

Members of the MovieBabble staff break down some of the more noteworthy parts of the film in our Cats Exit Survey.

On a scale from 1-10, how offputting are the CGI cats?

Blake Ison: The CGI of the Cats, honestly, was not that offputting to me. I’d put it at around a 3/10 on the ‘offputting scale’. It’s the other animals that were nightmarish!

Chris Wager: For me, it was a 4 simply because everything was so unfinished. The way that the Cats looked was very similar to the stage play to me.

Which cat character is your least favorite?

Blake Ison: My least favorite character was Gus the Theatre Cat, played by Sir Ian McKellan. His scene was the only part of the film that bored me.

Chris Wager: James Corden’s Bustopher Jones. His song was the least impactful and relied too heavily on fat jokes.

Nick Kush: Bustopher Jones. After watching 5,000 movies that included James Corden in the last two years, I still don’t understand his appeal. At all.

Is there a scene or moment that you liked?

Chris Wager: I loved the Railway Cat scene. All the tap dancing and how they entered that song was awesome. I just wish the effects would have been done so it didn’t always look like they were dancing on thin air. Still my favorite scene in the film.

Nick Kush: Ian McKellen knows what kind of movie Cats should aspire to become. He is hamming it up perfectly, and nothing is better than his musical number. (Him doing random cat stuff out of nowhere is a close second.)

What’s the most horrifying sequence in the film?

Chris Wager: Jennyanydots’ number (Rebel Wilson) was the weirdest scene in the film. Of course, it is the one with all the kid mice and cockroaches with the weirdest effects that looked like faces were pasted on cartoon cockroaches.

Nick Kush: COCKROACHES!!! (And also Idris Elba’s fur that is the same color as his skin tone which makes him look naked without genitalia.)

Why do you think Cats the play has been as successful as it has been over the years?

Blake Ison: I think the reason the musical has been so successful over the years is the same reason almost any musical/play is: the spectacle. The lights, the costumes, the performers, the music, the atmosphere; these all add up to the overall enjoyment and reaction to a musical/play and I don’t think that the movie lands on any of those points. This is something that can’t be translated to screen. There’s a sort of tactile feeling when you see a live performance; with the bright lights, the loud music, and the amazing performances. This just isn’t captured well in this film. It’s something that plays do day in, day out, unedited. When you try and put that on a screen, you lose a lot of the magic. By putting a wall between the audience & the show, you have a disconnect that is hard to reconnect without a coherent story and characters. All something like Cats has going for it, really, is the music and choreography, which is cut around so much in this film that it’s often hard to see what is happening. Most will complain about the CGI and that it takes away from the experience, but that disconnect from the audience is the first loss in a film like this. If you succeed with that, the CGI shouldn’t be a big issue.

Chris Wager: The play has been successful due to being a larger than life spectacle. The film took those elements and almost tried to pump them up larger than the play since, with film, you do not need to rely on the audience’s imagination to get your point across. It is what made the film so out there, the things that are said or alluded to on stage is shown in all their glory in the movie.

Nick Kush: It’s the kitsch factor. A lot of people are undoubtedly curious about the idea of very talented performers writhing around with cat makeup on — it’s far too strange to pass up. Many are oddly intrigued, and others want to see it as a goof. I’m sure thousands of people that ended up seeing Cats on Broadway started with the conversation “lol wouldn’t it be hilarious if we saw Cats???”

Is Cats the worst movie of the year?

Blake Ison: Look, I’m not going to go and say that Cats is a good movie or a bad one. I think it’s a beast of a film that transcends any real rating or reaction. What I will say, however, is that I honestly had a fun time in the cinema watching this film. Sure, a lot of it was me laughing at the film for the bizarre choices it was making, but it was still a fun time. I was only actually bored for a few minutes of the film, the rest of its runtime I was just a wide-eyed audience member just shocked at the fact that what I was watching was real. It’s honestly impossible to rate this film or call it good or bad, it’s just an unquantifiable nightmare that I had a blast watching. I don’t think it’s the worst film of the year at all, but it’s certainly not a good one.

Chris Wager: No, Cats ended up being one of my favorites for having the guts to be so far out there while trying to appeal to a mainstream audience. For me, I can think of a lot of movies much worse, but I think that The Kitchen takes the award of being so much worse than Cats.

Nick Kush: The Haunting of Sharon Tate and Unplanned would like a word, but Cats is unquestionably the biggest fiasco of the year in film. It’s the biggest miscalculation by a major studio that we’ve seen in quite some time.

Thank you for reading! What are your thoughts on the Cats Exit Survey? Comment down below!

[…] this year’s Academy Awards compared to last year’s. Heck, I laughed at something James Corden did, which is a […]