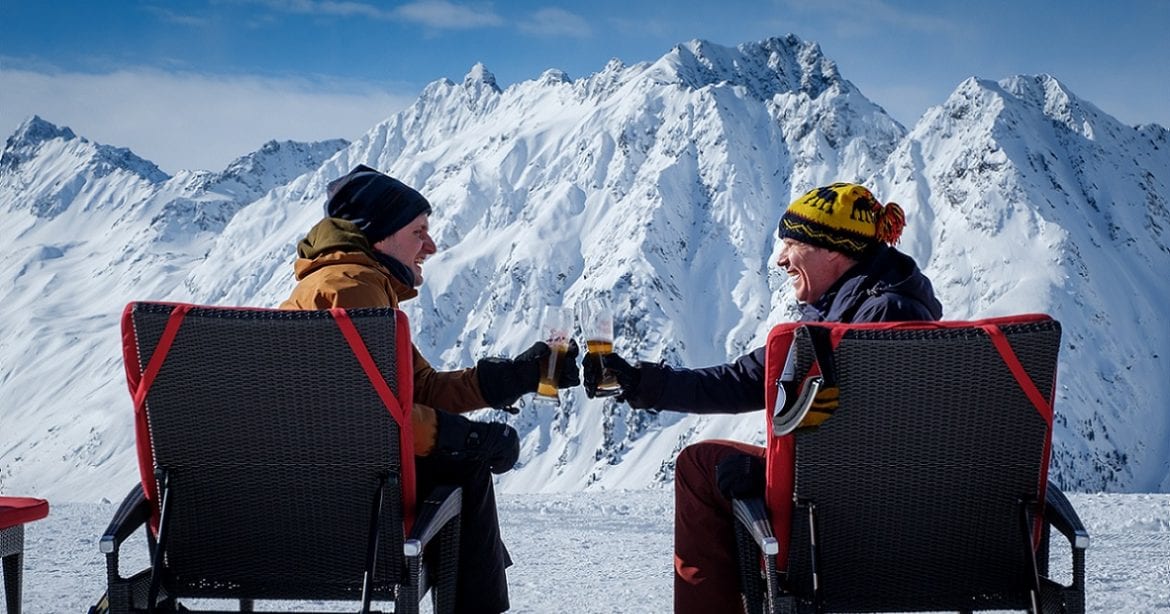 Title pun aside, it was only a matter of time before Hollywood remade Ruben Östland’s Force Majeure. The premise is just too good to pass up, being both a high-concept, attention-grabbing jumping-off point for marketing purposes and a great segue into high drama. Not to mention a vacation in a beautiful ski resort while shooting a movie ain’t half bad for all the stars involved. It’s essentially what Adam Sandler has been doing for years, except Downhill has an aura of prestige with great source material and the artist formally known as Fox Searchlight Pictures backing the production. The roadmap to success is clear.

Wisely, Downhill sticks to the same basic construction as Force Majeure. After a nice start to their ski resort vacation, a family sits down for a cozy meal overlooking the mountains, only for a controlled avalanche to barrel out of control with snow ferociously enveloping everything in its path. In a split-second decision, the father (Will Ferrell) grabs his phone and bolts out of sight, leaving his wife (Julia Louis-Dreyfus) and kids behind. Of course, the avalanche fizzles out before it ever gets to them, forcing the father to explain his split-second decision after the snow settles.

After this occurrence is where the two films split off. In Force Majeure, the inciting incident leads to a complicated examination of masculinity and trust that is black hole levels of dark comedy. In Downhill, those themes are still in place — if you squint hard enough, that is. The star-laden remake suffers the same fate as so many other American remakes: turning into a watered-down drama which doesn’t do any one thing particularly great to warrant a recommendation.

As someone who unironically loves Semi-Pro and finds The House exceedingly watchable, I would consider myself a Ferrellite. Yes, I was one of those teenagers who never stopped quoting Step Brothers. (Frankly, I still quote it all the time.) And yes, at one point in time, I had Ferrell’s piece of the lion vs. tuna argument from The Other Guys committed to memory. I find some sort of brilliance — no matter how fleeting — in every Will Ferrell movie. Except for Holmes & Watson.

Even in something as unfunny and awkward as Get Hard — with all its terrible improvisation — birthed an instantly iconic gif.

Despite my love for his comedies, I’ve always wished he would dabble with dramatic work on a more frequent basis. (After re-energizing Robert Pattinson and Adam Sandler, I dream that the Safdie Brothers want to take Ferrell’s unique gifts and run with them in some fashion.) Downhill marks one of the few times he’s made the leap. The other prominent roles being Stranger Than Fiction and Everything Must Go. Regardless of its general unimpressive qualities, Downhill is worth noting when taking stock in Ferrell’s entire career. He shares glimpses of what may be possible for him as a dramatic actor if he gets the right material down the line. Ferrell is 52 years old now; he can’t keep up his signature boyish energy forever. So many other comedic actors have gone through the same transition period, with varying results. Thankfully, Ferrell’s path forward has already taken some form.

Downhill‘s script is superficial when comparing it to Force Majeure‘s (a comparison point I’ll tackle in-depth below). The angst felt by both Julia Louis-Dreyfus and Will Ferrell’s characters are hardly realized, but Ferrell brings out the most of it by doing a version of the archetype that has been an underrated part of his entire career: the put-upon sad sack. Ferrell’s characters are largely in the middle of an identity crisis, regardless of whether or not their troubles are played for laughs. He excels at being exceedingly awkward, and also incredibly white. If his characters were shoes, they would be New Balances.

He adds a lot of nice touches to Pete, a dad whose foundation is quickly eroding in the aftermath of his major gaffe. The family vacation comes quickly after his father’s passing, and he appears haunted by it all times. Although it would have been great to see, Ferrell doesn’t have an iconic freakout scene; he’s generally downbeat. Still grappling with the loss, Pete is realistically operating at 60%. That he doesn’t quite come out of his haze may frustrate viewers, but I find it refreshing to watch Ferrell wrestle with an internal struggle that his character can’t articulate entirely.

Notice how Julia Louis-Dreyfus’ name has hardly come up in this review thus far. It’s hardly her fault. JLD is an iconic actress and performs admirably in Downhill, but she has even less of a character outline than Ferrell’s Pete. Her character is a great microcosm for the film: frustratingly shallow and ill-defined.

Force Majeure is a hilarious movie, not necessarily because of slapstick gags or overt jokes, but by how insanely awkward and overwhelming the emotion becomes. Ruben Östland creates an environment of staggering angst that always threatens to consume its characters. One of my favorite touches is the workers lurking in the shadows, watching the couple fall apart. They never have a moment alone to decompress; they can only be wound up tighter before they snap entirely, evident in a freakout scene that simultaneously had me yelling at the screen to stop because of its cringe factor and laughing uncontrollably.

But the main ideas in the original film concern masculinity and human nature. Force Majeure questions the role of the father, and whether or not it is his duty to protect his family. It challenges widely-held beliefs and isn’t afraid to spread the blame to everyone, not just the father figure. The last scene of Force Majeure, while initially perplexing, holds a lot of complexity for that very reason. In a lot of ways, Downhill tries to follow the same template. Many scenes are standard recreations, including the famous avalanche scene. For someone unfamiliar with Force Majeure, these moments may work nicely — they’re competently filmed at the very least. Similar ideas are at play, but there’s an overarching feeling that the training wheels are still on. Downhill lacks a searing bite.

This remake is content with safer, more approachable drama, shifting the focus to easily understandable external conflicts, such as a sitcomy flirtation between Julia Louis-Dreyfus’ character and a ski instructor. Not only are the changes tired, but they’re also skin-deep, lacking a distinct pulse and purpose. 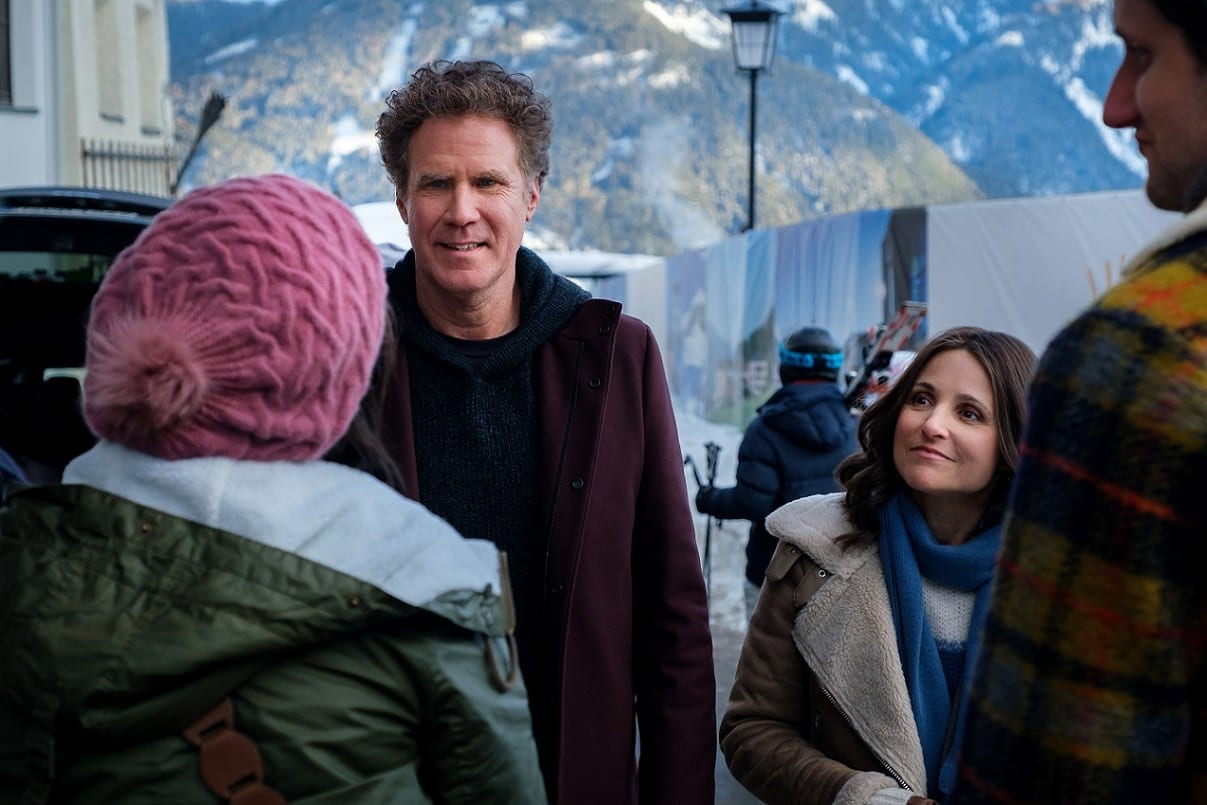 Caught in the Middle Ground

Comparing Downhill to Force Majeure was inevitable. On its own, however, Downhill is still a frustrating watch. Granted, there are worse things to do than to watch Will Ferrell and Julia Louis-Dreyfus on vacation. But the film’s main issue is the lack of a strong point of view. What exactly are Nat Faxon and Jim Rash’s perspectives on this material? The duo has solid TV and film work on their respective resumes, which makes the inability to answer this question even more confusing.

Downhill finds itself stuck in an unfortunate position: it’s neither schmaltzy enough to appeal to viewers who adore excessive emotion or layered enough to please film devotees. The drama is merely lifeless.

The brisk running time of 86 minutes keeps everything moving along at a reasonable pace. Nothing about the film is massively catastrophic, just middling. Although considering the talent on this project, it’s only natural to want more than a trifle.

Thank you for reading! What are your thoughts on Downhill? Comment down below!

[…] like a good title pun, so Meat the Future was immediately in my good graces when I became aware of its existence. […]

[…] Erickssong (Will Ferrell) and Sigrit Ericksdottir (Rachel McAdams) have been best friends since they were kids. Growing up […]

[…] But does it succeed? The answer is a fairly half-hearted shrug. […]

I think many people thought it was going to be a comedy given the talent involved, which I think has absolutely hurt the film’s reaction (even if it doesn’t deserve high praise as a drama either). Point #3 is definitely there as well, but ultimately the movie just never picks a lane. No matter what you wanted this movie to be, it somewhat fails. Pretty disappointing stuff :(

‘Nightmare Alley’ Avoids the Supernatural, but Casts a...