Netflix’s ‘The Occupant’ is an Uncommonly Intelligent, Gripping Thriller 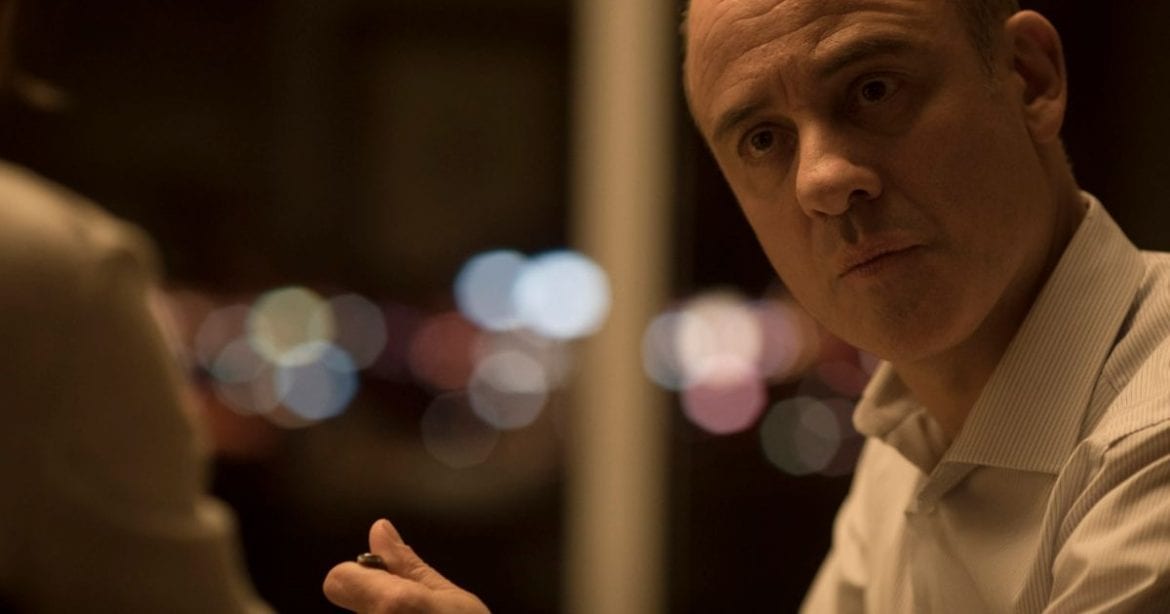 After last week’s The Platform, Netflix continues something of a roll for Spanish releases with David and Àlex Pastor’s The Occupant, a viscerally dark meditation on masculinity and status in an increasingly precarious world. (And that was before COVID-19.)

Javier Gutiérrez stars as Javier, a middle-aged advertising executive whose career has seen better days. He’s introduced interviewing for a job. A job he’s overqualified for, which is patiently explained to him by people who aren’t quite young enough to be his kids. (In a telling exchange, he refers to Telefonica to the interviewers’ dubiety. “Oh, you mean Movistar”  An American equivalent would be referring to Verizon as Ma Bell.)

Negotiating the modern world of work for a previously comfortable man is a rude awakening to the realities of unpaid internships and other ways business exploits the desperation of a workforce that has been told for decades that things are financially difficult. Quite often by billionaires.

Javier is a man who is used to success. The private school. The nice car. The maid service. One by one these things are lost. Culminating in his family losing their well-appointed apartment in a nice part of town. But Javier won’t let this last thing go. Keeping a set of keys, he secretly returns to the apartment. Pretending to himself that things aren’t changed. That his home is still a castle. (The movie’s title in Spanish, “Hogar” translates as “Home” and if that hadn’t so recently been used it would have been a better fit)

‘His’ home doesn’t remain vacant for long and in his secret visits, Javier gradually learns more about the new owners Tomas and Lara (Mario Casas and Bruna Cusí) Tomas is a recovering addict and the support group meetings are an easy way for Javier to wheedle his way into Tomas’ life. A life that Javier had and wants back.

A Step Up For The Pastor Brothers

The writer/director Pastor brothers have done interesting work before, their feature debut Carriers was a great little post-apocalyptic thriller made just as Chris Pine ascended to the A-list as Captain Kirk. Here though, they have made a leap in quality. By eschewing the sci-fi or fantasy aspects of their previous works and focusing on the motivations and interactions of people in a contemporary setting they have created rich, layered characters that behave believably even as their actions become more extreme.

The cast is uniformly strong but this is a study of one man and Gutiérrez takes the film by the scruff of the neck. Already a three-time nominee and twice winner of the Best Leading Actor Goya (the Spanish equivalent of the Oscars), I’d be very surprised if this doesn’t at least get him a fourth nomination.  There’s a switch between the easygoing charm of Javier the man skilled at marketing and the icy focus of Javier the man who will sacrifice anyone in his path to get the position he feels that is rightly his that is terrifying.

There’s a wider point made in the film that as much as Javier has darkness in him, he lives in a system that rewards darkness. What makes a successful businessman according to a thousand airport books on the subject?  Drive, single-mindedness, the ability to go after what you want. You know who has those abilities in spades? Sociopaths. Spain has yet to really recover from the crash of 2008 and the Pastors clearly have a point to make about where the philosophy of “nice guys finish last” leads. There are pointed references to the way companies have used the current financial uncertainty to erode workers’ rights.

In its early moments, The Occupant recalls Fight Club. A man struggling with modern life lies his way into support groups to feel better about himself. Where The Occupant diverges is that where Tyler Durden decried the world where “advertising has us chasing cars and clothes, working jobs we hate so we can buy shit we don’t need. ” Javier needs the car and the clothes. He’s a man defined by his home. Not home in the sense of where the heart is but the fancy apartment in a high rent location.

So many characters explain that what’s important is support for each other. It’s notable that Javier’s wife Marga (Ruth Díaz) is understanding and reassuring. She wants them to get through a rough patch and if that means a smaller house or cheaper car, so be it. That’s not enough for the toxic masculinity that Javier has defined himself with. He’s shown to be so in his own world that he doesn’t even know his son is struggling, much less what to do about it.

The makers ratchet up Javier’s actions and the suffering he inflicts on those around him so gradually and smartly that it flips into shocking death without feeling forced or unearned. The Occupant should be seen by anyone looking for an intelligent, gripping thriller.

Thanks for reading! What are your thoughts on The Occupant? Comment down below!

[…] Martínez Sosa’s Liborio aims to deconstruct many religious concepts while providing a gripping narrative for audiences alike. The story tells that of the popular religious leader, Papá Liborio, […]

[…] makes Charter such an uncomfortably gripping film is Kernell’s handling of the tension and mystery. The cause of Alice’s divorce, her […]