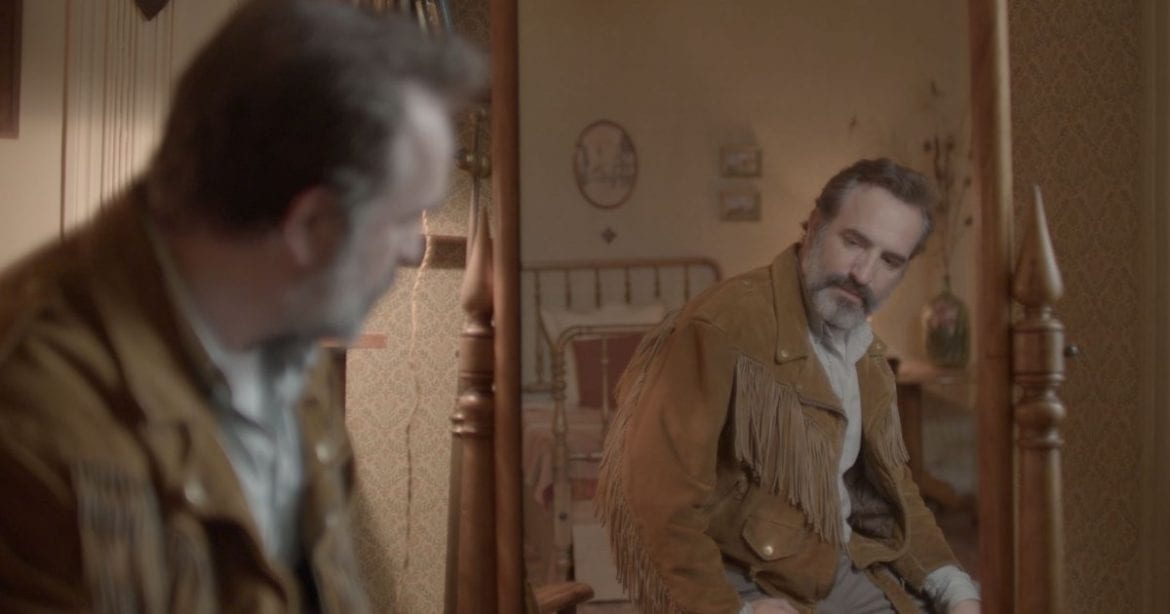 I agonized over the title of this article for some time. (SEO is tough, ya’ll.) But sometimes, when a movie is as ridiculous as Deerskin, being as plain as possible can do wonders. It paints a better picture than any combination of clever wording could ever do. Plus, it grabbed your attention, didn’t it?

And so it goes for the rest of this piece — putting it as plainly as possible is the only way to highlight Deerskin‘s brand of absurdity. Coming from Quentin Dupieux, the director of Rubber, a movie about a runaway car tire on a killing spree through the California desert, I should have been more prepared for Deerskin‘s insanity. The film strikes such a peculiar balance, however, and not what its misleading trailer would have you believe. Deerskin outrageously goofy, but also entirely deadpan in its delivery that it’s nearly impossible to find your footing throughout. It’s a recipe for a quintessential “you’re mileage may vary” moviegoing experience. Personally, I found this lark quite fun, if still perplexing.

After a vague falling out with his wife, Georges (Jean Dujardin) drives off to answer an advertisement about a deerskin jacket, paying almost 7,500 Euros to take it off a man’s hands. (For a hilarious comparison, you can find 100% genuine deerskin jackets on Etsy for less than $100.) The man is so shocked to see so much money, he even throws in a digital camcorder with the deal for good measure.

Following the transaction, Georges drives to a local inn at the foot of some mountains. He’s immediately enamored with the jacket, remarking he has “killer style” and often stares at himself in the mirror. The problem is, after the transaction, Georges is now out of pocket money and realizes his credit card is blocked from the large withdrawal he made to pay for the jacket.

For the time being, Georges heads toward the local bar, where he meets the bartender Denise (the wildly talented Adèle Haenel). He immediately spits out lies with his newfound confidence from wearing the jacket, claiming he is a filmmaker and is in town to shoot his latest work, to which Denise replies she edits in her free time. (In a humorous aside, she mentions that she re-edited Pulp Fiction by putting the scenes in order, only to learn it sucks.)

Later on, Georges begins having conversations with the jacket. You know, as one does. Georges remarks that he has one goal, to be the only person on Earth left wearing a jacket. The confession leads him on a downward spiral that simply gets more and more bizarre. 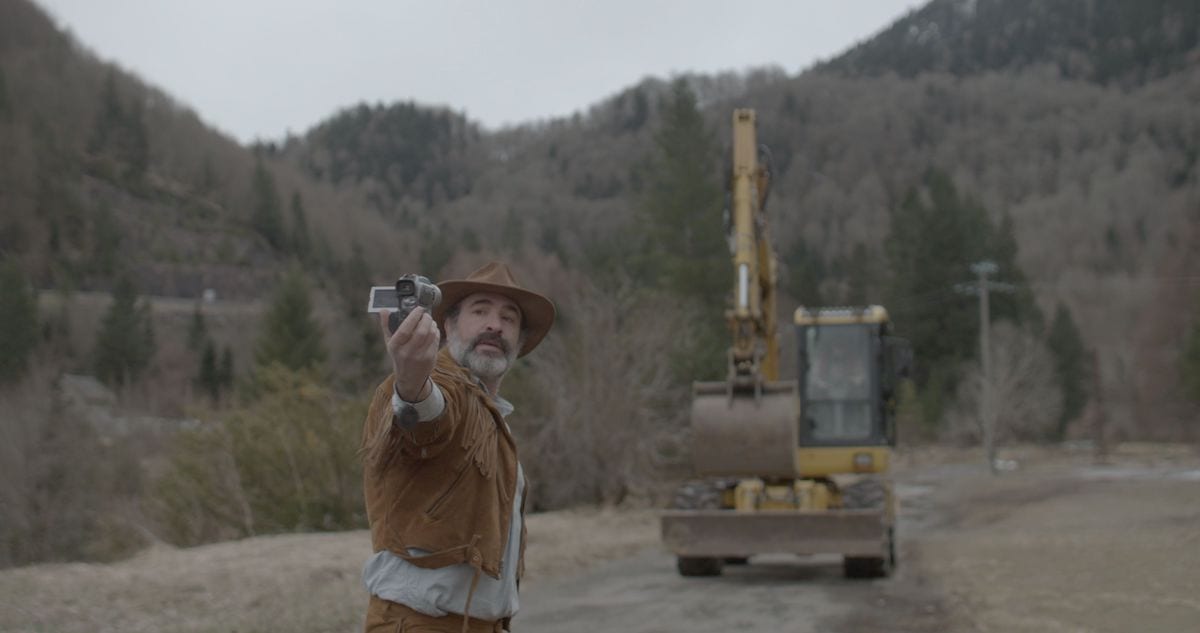 Deerskin is one of the more creative satires on our fixation with our own image since Ingrid Goes West. In an attempt to maintain his own perception of his image, Georges resorts to just about anything. He hires Denise as his film editor, swindling her out of her money to sustain his habits. He then gives the money to unassuming strangers who think they’re going to act in a movie, only to then drive off with all their jackets before they realize what’s happening.

As his desire to be the last person wearing a jacket on Earth grows, his actions become more unpleasant. When people won’t willingly give him their jackets, Georges snaps, sharpening a ceiling fan blade(!!!) and using it to slash people to death in the night while he continues to film. Upon seeing his snuff films, Denise remarks, “they’re brilliant!”

Themes of self-absorption and a clouded sense of status are abundantly clear. Weird, yes, but very clear. It’s when Deerskin begins to mold those ideas into the act of filmmaking that I find it’s at its most interesting. The content of Georges’ snuff films is more or less the exaggerated compulsions many directors weave into their own films. We laud talents such as Hitchcock for their bold choices, but the items they fetishize are impossible to ignore in almost every single one of their films. Does Deerskin present this idea with much subtlety? Not necessarily, but I wouldn’t expect a movie that has a man slicing people with a sharpened ceiling fan to have that goal in mind. Regardless, it’s a perceptive addition I appreciate.

Quentin Dupieux places all of Deerskin‘s wackiness on Jean Dujardin’s shoulders. Arguably his most famous role in America is as George Valentin in the utterly limp The Artist (I still want justice for Dujardin beating out Brad Pitt’s performance in Moneyball for the Best Actor Oscar) or maybe his supporting role in The Wolf of Wall Street, but Dujardin has been comfortable moving from one odd French film to the next. For an Academy Award winner, I admire his desire to work on projects such as Deerskin and not the usual roles actors are offered after he or she gets that coveted Oscar. (See Rami Malek as the next Bond villain.) 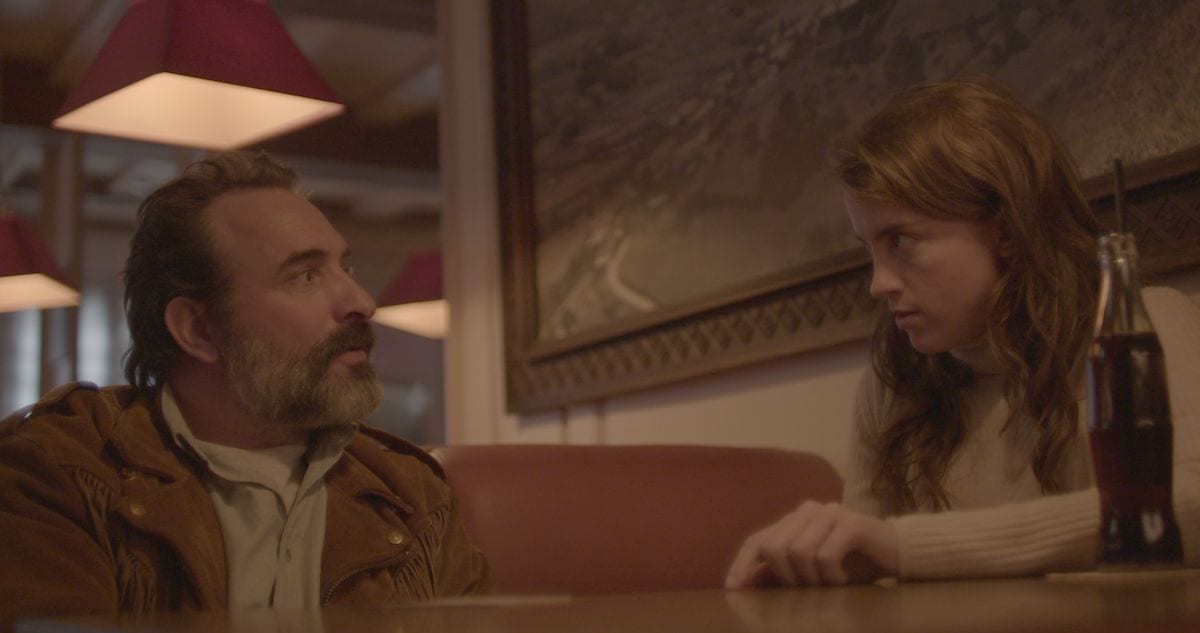 Deerskin is a memorable role for Dujardin, and not just because he gets to kill people with a sharpened ceiling fan. (I don’t think I’ll ever get over seeing that as a murder weapon.) The craziness in his character is all internalized. For the most part, Dujardin reacts reasonably to others for a long time. Even when he becomes totally unhinged, he doesn’t exude Jim Carrey levels of animation. He makes all the foolishness feel mundane, which only improves the comedy in my mind. I had plenty of laughs from the contrast between the natural performance and wild subject matter. Dry humor works very well on me, I guess.

Deerskin is Fairly Slight and Unremarkable

At 77 minutes in length, Deerskin never threatens to overstay its welcome, but it may not leave a lasting impression (aside from it using a ceiling fan blade as a katana, of course.) While amusing, its approach to the material may also be its slight downfall. It’s not outrageous enough to reach the required threshold for the “it’s so insane you got to see it” crowd of film fans and I doubt it has the depth to satisfy the most snooty of cineastes. Overall, it’s slightly anticlimatic, never elevating above “good” until it eventually finishes on a head-scratching final scene that feels like it came out of left field (and that’s saying something for a movie this strange.)

I question if Deerskin amounts to much in the end, but I always have a soft spot for little film oddities such as this one. Quentin Dupieux shows a lot of creativity on a fairly small scale — enough to make me want to look back through his filmography and watch his films I’ve missed to date. Also, there are far worse alternatives in life than watching Jean Dujardin and Adèle Haenel, that’s for sure!

Thank you for reading! What are your thoughts on Deerskin? Comment down below!

[…] Directors Joaquín Cociña and Cristóbal León filmed The Wolf House frame by frame with digital photography. A fact that is more insane when you see the amount of detail in each nanosecond. Literally everything is moving in the frame, which is as unsettling as it sounds. But it’s also undeniably beautiful for the entire 70+-minute runtime. […]