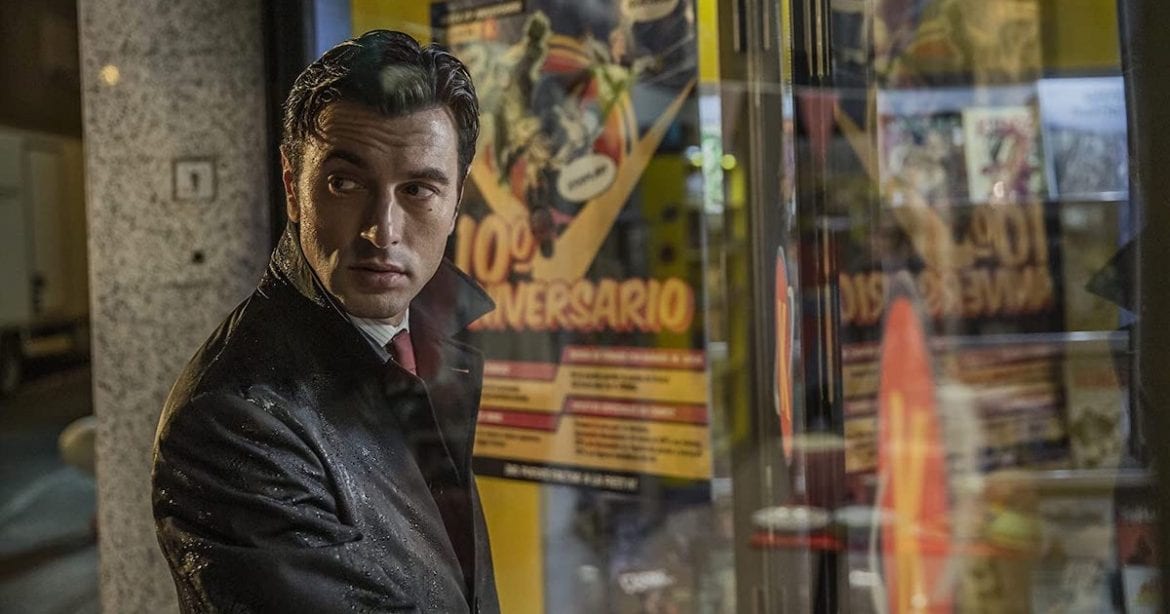 Madrid 2019, and apparently random victims are being killed in ways echoing the origin stories of famous comic book characters. Ailing senior Detective Cosme (Antonio Resines) is joined on the case by up-and-coming detective David Valentin (Javier Rey) under the supervision of their commanding officer Norma (Verónica Echegui). The team finds themselves struggling to understand the twisted machinations of the mystery killer until Cosme discovers pieces of a comic at a scene. This leads him to ask for assistance from his layabout ‘Comic Book Guy’ son, Jorge (Brays Efe). The approach of strait-laced cop David and Jorge the slacker ‘friki’ (Spanish for nerd), results in predictable friction.

Stretching back to 48 Hours, the “unorthodox crime-fighting partnership” trope is still going strong. “She/he’s a cop, they’re a crime writer/mentalist/alien/actor” is a seemingly inexhaustible well for writers and it’s used here to fun effect. The makers do go a little hard on Jorge being a loser early on, being the sort of manchild who’d fish a piece of toast out of a bin and thoughtlessly munch away on it. David too, is initially a little more of a caricature than a character, all prissy disdain and standoffish-ness. Fortunately, they do settle into more natural behavior as Unknown Origins moves on.

One character that is refreshingly cliché-free is Echegui’s head cop, Norma. No ballbusting, no yelling, just a professional approach, but she also has ‘nerd’ interests like pretty much every person under 50 (and quite a lot over) does. We’re in an era where superhero movies make billions of dollars, where Funko is a $700 million company that only produces ‘friki’ friendly models. Non-nerds are the oddballs now, regardless of whatever ‘nerdface’ nonsense The Big Bang Theory is putting out.

There’s a nice little bit where a cop disparagingly waves towards the ‘losers’ in a comic store and Jorge rattles through their accomplishments “He’s a lawyer, she’s a doctor, he owns a tech company…etc”. You can have a touch of comic/sci-fi stuff without it defining you, it’s a matter of degree.

The clash between the opposite ends of the spectrum of David and Jorge (with Norma somewhere in the middle) is a nice little spin on the crime investigation genre. However, the crimes themselves are ported in from a much darker Se7en-esque universe. Drawn out torture deaths depicted with grotesque, horrifying special effects. They’re an odd choice, moving the light PG-13 CBS procedural feel into R-rated territory that is not family fare at all.

The villain of Unknown Origins is really where the film drops a star rating or two. Se7en-esque is underselling just how much the villain is like John Doe. Suspiciously obvious clues? Check. Convoluted murder methods? Check. Nausea-inducing corpses in dimly lit warehouses that have plastic sheeting hanging from the ceiling for some reason? Check, check, and check.

When the killer’s identity is revealed, it’s clear they’re several cards short of a full deck and prepared to go to extreme, violent lengths to carry out their plan. Their plan which has far more in common with the worlds of DC or Marvel than the worlds of Lincoln Rhyme or Harry Hole.

All this sharing screen time with police working in Sailor Moon cosplay and Brays Efe’s broad comedy strokes. His previous biggest work was as the lead in Paquita Salas where he played the larger than life (female) boss of a talent agency. He’s similar in style and appearance to a young Jack Black. You can imagine how disconcerting it would be to see School Of Rock era Jack Black appear in The Bone Collector or Kiss The Girls.

This inability to pick a lane isn’t an insurmountable flaw. The lighter, comedic moments work well. There are darker, more adult sections that are directed and performed solidly. But the switching between these tones is whiplash-inducing. There’s a genuine love for comic books on display here and you can’t help but wonder if Galan Galindo has made this film as a compromised way to make a superhero movie on a crime thriller budget. (His short film directorial debut was about comics legend Jack Kirby.)

There are enough sparks on display here to make Unknown Origins a promising international calling card for the makers. It zips along and doesn’t overstay it’s welcome. It might have been better though if it had a stronger sense of its own identity.

Thank you for reading! What are your thoughts on Unknown Origins? Comment below!