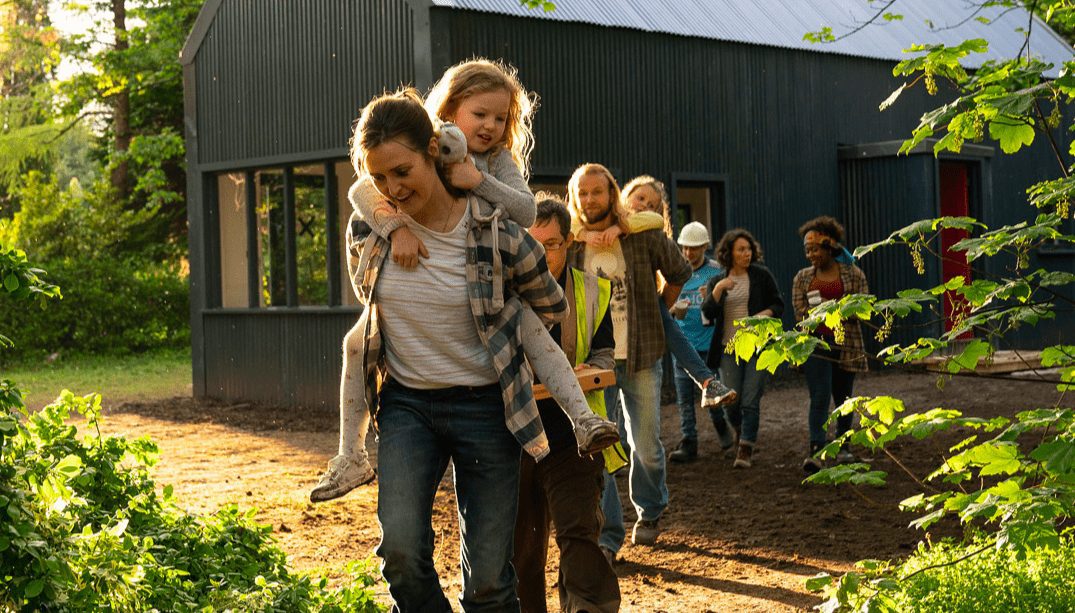 Diverting from the bubbly, fun theatrics of the stage musical-turned-film Mamma Mia! and the engaging, nuanced study of one of Great Britain’s most polarizing prime ministers, in the form of a Margaret Thatcher biopic, The Iron Lady — both of which were considered global hits — Phyllida Lloyd has returned to the big screen with a smaller, low-budgeted project, Herself, that follows the same themes of family and independence that made her initial hit film, Mamma Mia! such a resonant and lovable feature.

Herself, which premiered at the Sundance Film Festival earlier this year, is a film about a mother who escapes her abusive husband and seeks to escape the homelessness of leaving her home and husband by setting out to build her own home for herself and her children. It’s a story about the unjust continuance of a broken housing system and motherhood, as Sandra, our main character, seeks to rebuild her life and rediscover herself and her relationship with both her daughters.

A topical watch in this day and age, the film’s exploration of delicate and relevant themes like trauma and love, among the backdrop of leaving an abusive marriage, certainly doesn’t make for an easy watch — uncomfortable and unsettling at times, and painful at others. Though in its harrowing themes, it also manages to capture a very harsh reality that is still faced by many today, in sincerely benign and vivid ways that properly show the graphic inhumanity behind domestic violence and abusive marriages, and the resulting trauma that haunts its victims. On another front, the film is also about the disordered and babel injustice of homelessness — a direct cause of a disarrayed housing system — which sees Sandra build herself her own home in an attempt to escape homelessness, while tending to her children and her own needs.

Clare Dunne’s topical breakout performance spearheads this tearjerker of a film, as she expresses her character’s tumultuous and hard reality of living in fear of her husband and his abusive behaviors, as she separates from him while needing to maintain her children’s contact and time with him. Her character is faced with numerous perils and disputes, between having to see her abusive husband to split time between them for the kids, to having to manage her kids while searching for jobs, and all of this while building her own new home. Though Herself is never truly thorough in exploring this adversity, Dunne’s performance makes for a much more apparent poignancy as she expresses her character with more dimensions and a human touch.

Strong performances from Clare Dunne and Harriet Walter boost this work as something more moving than it is written or crafted to be, in essence creating affection out of their ordeals with bleakly human yet realistically disturbing themes, but their roles in Herself are never truly powerful and formidable enough to outshine the oversimplification that lies beyond its seemingly affecting and heart-rending forefront that touches points on pressing topics. It’s a solid return for Lloyd but admittedly a feature that required more depth with the way its characters were written to really stand out as a further cathartic and effective work.

Herself is screening online as part of the London Film Festival, running from October 7th – October 18th. To view the full program and buy tickets, head to bfi.org.uk/london-film-festival.

Thank you for reading! What are your thoughts on Herself? Comment down below!

‘Honey Boy’ Teaches Us Something New About Parenthood