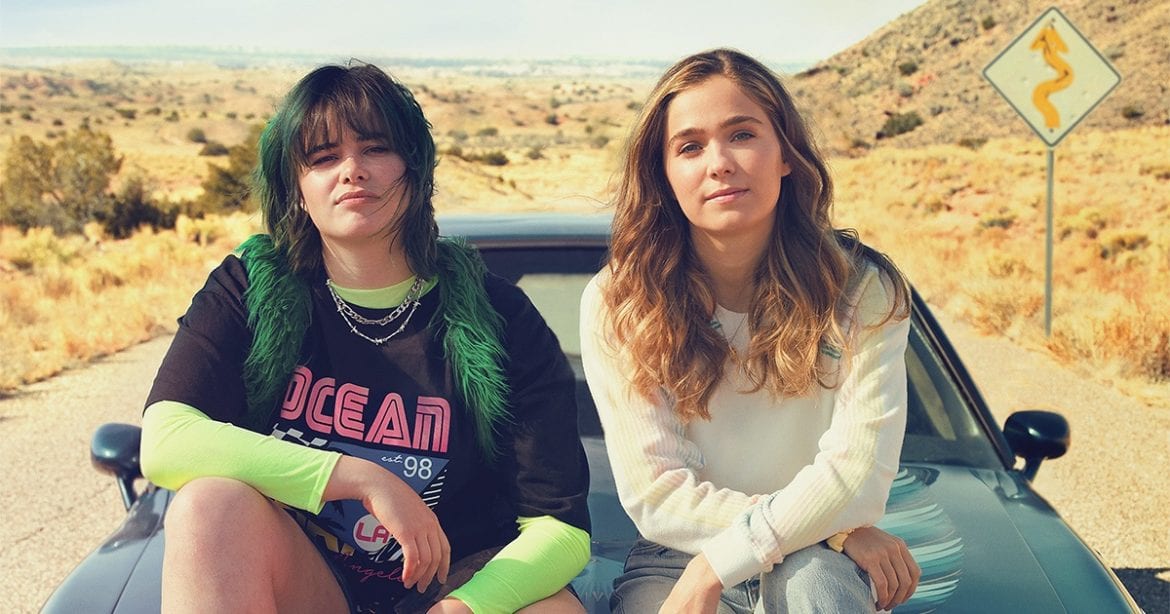 The personal is political and art is political. I’ve learned this in my time as a student but also in my time as an adult functioning in the middle of a global fallout, which is a consequence of years of unchecked greed, destruction, and bigotry. In regards to both personal experiences and art, Unpregnant manages to be a shining beacon of comedy and love, while also bringing to light some deeply unpleasant truths about how absolutely archaic the punishments are for being a woman in America. Particularly, a sexually active young woman.

The basic premise of Unpregnant is a somewhat familiar trope. Two ex-best friends have to go on a big road trip because one of the friends is in trouble. In this particular story, golden girl Veronica finds out she is pregnant, despite all her best efforts to remain otherwise. She’s set to go off to a good college, and a baby would ruin those plans. She sets out to get an abortion. The rub, of course, is that because she’s 17, she cannot get an abortion in her home state of Missouri without her parents finding out. She wants to do this as quickly and quietly as possible, so she hatches a plan to spend a weekend driving to Albuquerque. Naturally, her popular friends are unhelpful, and it turns out her boyfriend is the reason she is pregnant due to his carelessness, so she recruits her ex-best friend, Bailey, to help her.

Bailey is the consummate rebel, all black and punk to Veronica’s blonde and prep. Bailey agrees, and hilarity ensues as they run into a myriad of twists and turns on their trip. I have to say, this is one of the, maybe, five films I have ever seen that takes a predictable premise and genuinely surprises and delights me along the way. The other films in this caliber are Clueless, Parasite, Booksmart, and Ready or Not. So, Unpregnant is one among excellent company.

It’s based on the novel of the same name by Ted Caplan and Jenni Hendricks, and besides them had four separate screenwriters. I usually raise an eyebrow at films with a lot of writer influence, but I think something magical happened here. Every bit of the plot is more clever than the last, there are amazing little details that add depth to Bailey and Veronica’s friendship, and the dialogue is deeply funny. It would honestly be hard for me to summarize the different parts of this trip in any way that makes sense, so I am going to let you watch it for yourself. I applaud Rachel Lee Goldberg‘s writing and direction here. My jaw was on the floor when I wasn’t cackling, honestly.

Barbie Ferreira is about to hit her moment. After her breakout role as Kat in Euphoria, she has been all over magazines, H&M fashion spreads, and not to mention her dynamite Instagram. Unpregnant is her second huge role, but she’s only just started what is sure to be an incredible career. She brings so much humor and vulnerability to her role as Bailey, and I wonder if Ferreira saw herself in this role, or if she’s just that good that I never questioned it for a second. Bailey has a touching moment with Kira Matthews, a race car driver played by musician Betty Who, which could have been a whole movie in itself.

Her co-star, Haley Lu Richardson, struggled a bit more in the beginning of Unpregnant to capture me in the same way, but I think she ultimately brought a lot to Veronica that could have easily been swept to the side in favor of a more straight to the point take on her. Bailey and Veronica’s climax comes in the form of an intense fight about their friendship breaking up, and I was fully ready to side with Bailey. But, Veronica brings up how tough it was to be Bailey’s friend. I can relate! I have had friendships with good people that disintegrate because it’s just too hard. I think Richardson endeared me to Veronica, who is so Type A that I know her blood is too. Richardson has also had a busy couple years since Columbus, and I honestly think she’s great! I want her to find more roles like this, because friendship-based films are what she was made for. Ultimately, their chemistry is excellent, and between the writing and their relationship, I felt it deep in my soul that these two are meant to be friends forever.

One thing I do want to point out about Richardson’s performance is how much Veronica is trying to keep it together, and how clear that is on Richardson’s face. As I introduced, the personal is political, and Veronica has to make a very personal and very political decision with very little support. In one moment, she and Bailey are stranded, and Veronica curses the Missouri State Legislature for putting her in this position, and she’s right! It’s ridiculous that this movie could happen. Richardson owns that part of the role.

There are some interesting side roles, particularly Alex MacNicoll as the unhinged Kevin, and Breckin Meyer (Clueless gang forever!) and Sugar Lyn Beard as Kate and Mark, a seemingly kind couple with sinister intentions. MacNicoll plays Kevin so realistically, he reminded me of a series of boyfriends between myself and my friends. His final confrontation scene with Veronica also plays as a great foil to her character. While she has become calm and composed about her decision to get an abortion, he has progressed into a stalking, manipulative ex who is threatening her if she does get it. There is such a fine line between kindness and control in the perception of a boyfriend, and MacNicoll nails the crossing of that line. Meyer and Beard are also so twisted and delightful to watch, and again play as a great foil to our heroines’ journey.

The Music of Momentum

This soundtrack bounces so fluidly throughout the film, it felt like what I would play on my own road trip to go get an abortion. The standout song is, of course, “Since U Been Gone” by Kelly Clarkson. Clearly Veronica and Bailey’s song, they sing it at the top of their lungs intermittently throughout their trip, and it warmed me in a way few things do. I have a best friend, no brag, and our song is “Jackie & Wilson” by Hozier. We have been on a lot of car rides where we are giddy with excitement, crying, numb, content, and everything in between, blasting that song and singing it to each other. “Since U Been Gone” lines up with Veronica and Bailey’s age, as a song they would have loved as kids, but it also acts as the theme song to their freedom.

They’ve left their small town to go get an abortion, they’ve hit ups and downs along the way, sure. But, they’ve let go of their inhibitions and their prejudices against one another to create a tiny little microcosm of the universe where they can be themselves. Which includes all the messiness of a broken and soon-to-be-repaired friendship. It’s also a big middle finger to the oppressive, puritanical American state, and acts as a double entendre in that way. Can a song be a double entendre in the context of a movie? I think it can.

One day I will write a review for a really bad movie on this site, but so far so good. Unpregnant is no exception. It’s absolutely delightful and poignant from start to finish, and while being goofy and silly, brings up interesting points about our society at large and how hard it is to exist in it. Getting an abortion should be mundane. This movie reminded me that America makes sure it’s anything but, especially to young women under Republican regimes. If you agree with me on this, I encourage you to donate a couple bucks to Planned Parenthood. God knows that we definitely need them if we need art like Unpregnant.

Thank you for reading! What are your thoughts on Unpregnant? Comment below!