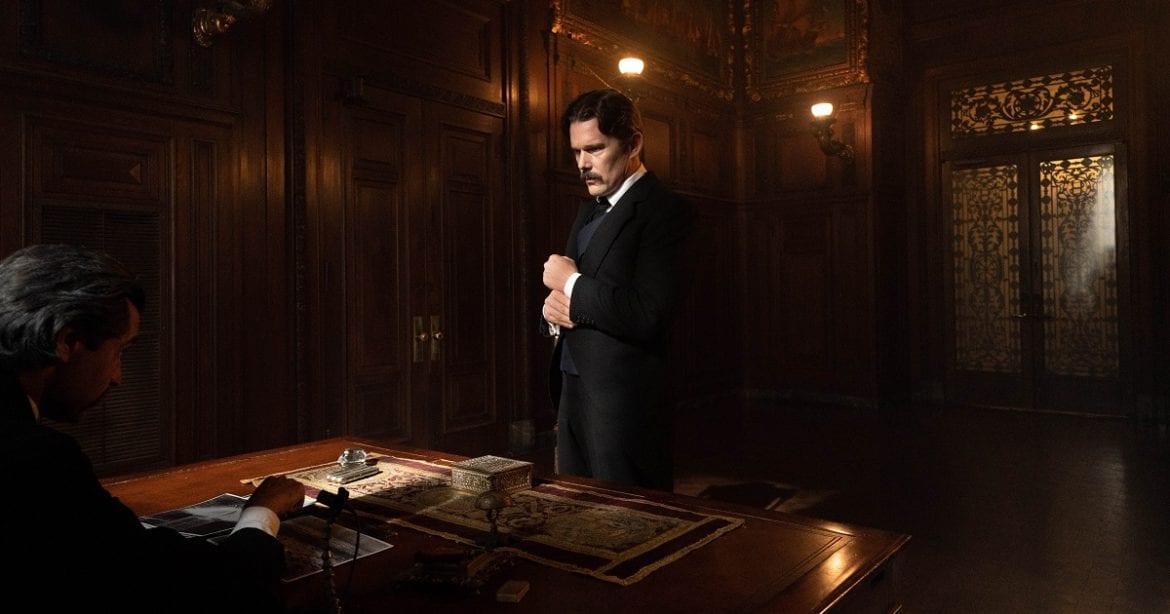 If there’s one kind of movie that bores me the most, it’s the by-the-numbers biopic, which often plays like creatives formed the script by glancing at a Wikipedia page. You can forget most biopics about incredibly famous people; most of the time, they boil down to “watch this famous person do the famous thing you know.” (No, I don’t care that the Live Aid performance in Bohemian Rhapsody is nearly identical to the real thing. Relax about it.) I’ve also grown unbelievably jaded towards the number of actors praised for performances only a few steps away from Jason Sudeikis’ Joe Biden impersonation on SNL.

Truth is, this kind of framework breeds nothing but artificiality. These movies claim to seek the answer to the question such as, “what was this person really like?” when they ultimately do nothing but act as glorified clip shows and confirm the idea that we’ll never understand who these people were in real life. Most of the time, the best biopics are made about people who don’t have a strong relationship with the public, allowing filmmakers to add an extra bit of creativity and mess with the form. (A recent favorite of mine is Josephine Decker’s Shirley, a biopic on writer Shirley Jackson, which is devilishly elusive and strange.) I ache for biopics to mess around with their famous subjects.

So, when an ice cream fight broke out shortly into Tesla, I was immediately intrigued.

The Myth of the Great Man

Tesla shares a similar outline with some of the most paint-by-numbers biopics: we watch as Nikola Tesla (Ethan Hawke) rises to prominence as he works on his idea of funneling electricity through alternating currents, meeting other industry titans (Thomas Edison, J.P. Morgan, George Westinghouse, to name a few) along the way. In other words, we follow the journey of a supposedly great man as he comes in contact with other supposedly great men. That is until Anne Morgan (Eve Hewson) comes onscreen and discusses the results you get searching for Tesla on Google. Quickly, Tesla makes it clear this story is something postmodern, and the accepted rules of recounting a historical figure’s life will not come into play.

More accurately, the movie turns into a farce. Director Michael Almereyda (his last movie, Marjorie Prime, is crushingly underrated) does whatever he can to undercut generic biopic tropes. When it’s finally time for Tesla to make his grand speech about his invention, a scene that would normally be the actor’s “Oscar moment”, Hawke stands up and meekly says he doesn’t have much to say. 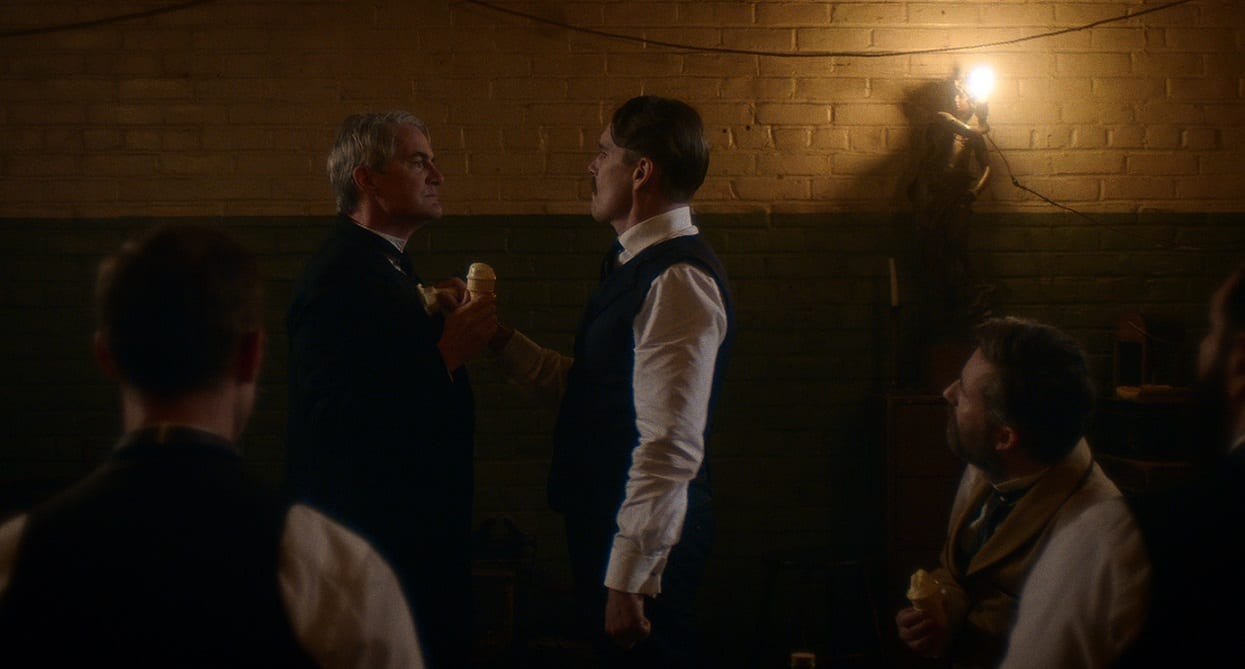 Ethan Hawke’s portrayal of Tesla is actually the opposite of what you’d expect; essentially, he’s a pretty miserable, anti-social guy who only wants to escape further into his mind and refine his ideas. So, entirely different from David Bowie’s iconic turn as the engineer in The Prestige. He has no desire to find a woman or create his own myth, which seems like a rebuke against the general desire to elevate notable historical figures to icon status. He only wanted to invent. Any attempt to mythologize him is pretty silly, and, ultimately, pretty pointless. So what’s the point in building up a man who clearly had no interest in it himself? Instead, let’s watch Thomas Edison whip out his cell phone!

Tearing It All Down

Hawke’s accent is all over the place, even changing in the middle of sentences. The same goes for Kyle MacLachlan’s Thomas Edison and Jim Gaffigan’s George Westinghouse (unbelievable casting choices, if you ask me). It plays like Almereyda gave completely different character directions depending on the scene. Normally, that’s just shabby, but in the case of Tesla, the consistent inconsistency shatters the film’s artifice, breaking all notions of earnestness. In a strange way, such an odd approach still captures the essence of Tesla, who is always framed as a man out of time and place.

Later on, as Tesla conducts some of his famous experiments in Colorado Springs, the backdrop is clearly a picture of sorts, indicating all events you are watching are staged in some way. Filmmakers take serious artistic license in narrativizing real-life events, Tesla calls direct attention to it, almost as if it’s criticizing us for accepting movies that take liberties but play them as if they’re true.

A Distinct Sense of Humor

However, the reception for Tesla has been mixed at best; many are dismissing it entirely. For as much as I really like this movie, I can certainly see why that’s the case.

For as absurd as Tesla gets as times, its sense of humor isn’t necessarily over-the-top. The characters play each situation totally straight; when an ice cream fight breaks out between Tesla and Edison, Hawke and MacLachlan treat it like Shakespeare. And while there are a few monumentally goofy sequences, much of the comedy comes from subtler touches, such as lofty musings that sound important, but ultimately mean nothing. (Characters make many asides about cats and who ultimately strokes their backs or skins them.) The pacing is still fairly downbeat too, almost as if someone infiltrated a serious drama and swapped out some of the dialogue at the last second and replaced it with something far more eccentric.

Take the opening scene, which fades in on Tesla struggling to roller skate while Anne Morgan provides some lyrical voice-over. John Paesano’s score adds a sense of poetry to the scene, and Hewson’s line delivery is so proper and refined, that there’s a strong tendency to take everything in stride. You almost have to slap yourself to remember that the entire setup of the scene is hinting at the absurdity to come. The biggest struggle to finding value in Tesla is getting on its wavelength, which I’ll admit, is very, very strange. For many, it’ll be too much to bear.

But when I see movies as unique as Tesla come along, I look to embrace them. It’s not every day you get to see Ethan Hawke smush an ice cream cone on Kyle MacLachlan’s face. Even when it doesn’t work, the film is a mind-boggling experience that induces plenty of belly laughs. None bigger than its ending, which is so impossibly bizarre I wouldn’t DARE spoil it here. Honestly, it’s probably my favorite ending of the year, and yet another example of why Ethan Hawke is too good for us mere mortals.

Thank you for reading! What are your thoughts on Tesla? Comment down below!

So I’m a fan of the average “by-the-numbers” biopic. It’s everything I want and hope in a good biopic. And it’s one of my fave genres.

So I’m not sure how I would feel about this film. But I guess I havta see it to find out.