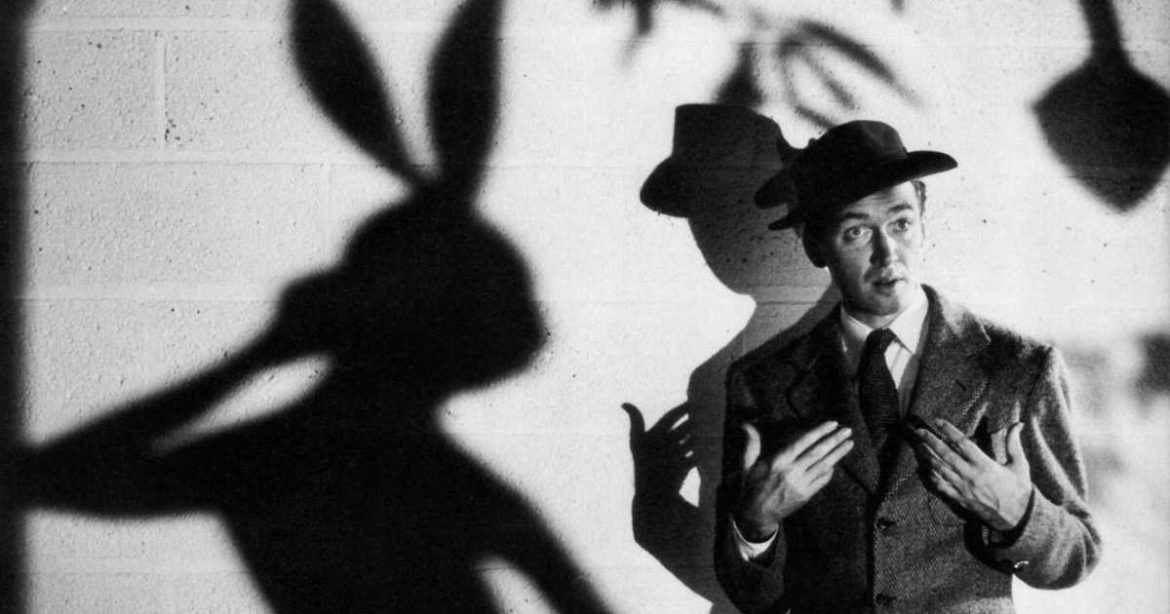 For the life of me, I can’t figure out why Harvey (1950) is marketed as a comedy. There are funny parts, sure, but the overall subject matter is pretty depressing. A man is suffering from delusions because of his alcoholism developed after the death of his mother. Great material for a comedy!

I’m not complaining — I do love James Stewart in Harvey, but the tone is just all wrong.

Let’s talk about what was probably the worst part of Harvey: the asylum. It’s played off as a joke, but the conditions that the mentally ill find themselves in in the asylum are abysmal. The orderlies are rough and rude while the doctors seem to be there only to inflate their own egos. This is made into more of a joke when Aunt Veta (Josephine Hull) is wrongfully interned there and she suffers what seems to be a sort of PTSD. Of course, the PTSD-type thing is also played off as a joke because Harvey is meant to be a comedy, but it’s deeply disturbing. I would imagine that being locked in a padded, soundproof cell would make anyone go a little crazy.

On top of all that, the doctor who supposedly runs the asylum is never seen outside of his office and eventually ends up believing in Harvey as well. What does it say when the person who runs the asylum is also mentally disturbed? It really shows what conditions were like for the mentally ill in our society and that’s more a tragedy than anything.

Having a drunk character can be funny at times, like Otis in The Andy Griffith Show. Harvey does its best to try and make Elwood’s (James Stewart) alcoholism into a sort of an afterthought and funny little side bit, but it fails to hit the mark. It’s implied that Elwood is quite the lush and is why he is seeing visions of Harvey. Why isn’t this discussed more?

Elwood spends nearly every day at the bar with Harvey to the point where the bartender is well aware of who he is and his mannerisms. Elwood knows everyone who comes in and out of the bar and is good friends with all of them. While it’s touching that Elwood can find friends even in the lowest of society, it’s sad that he chooses to spend all his time at the bar meeting these characters.

Watching Harvey more and more, I’m beginning to see Aunt Veta’s point of view. Elwood is deeply troubled and probably should have had some psychiatric help to deal with his chronic alcoholism and depression.

Um, are we supposed to just gloss over the fact that Elwood’s mother died in his arms? Aunt Veta mentions it offhand to her daughter, Myrtle Mae (Victoria Horne), and no mention is made of it again. That’s a pretty traumatic thing to have happen. Instead, it’s passed off as a punchline.

Knowing that fact alone, it’s no wonder that Elwood ended up snapping and delving into alcoholism. And yet, his family and friends only enable his behavior. The bartender serves him every day. Veta allows him to go down to the bars all the time. Did anyone ever ask anyone how Elwood was doing? Harvey is probably the only person who seems to care about him.

Instead of being there to help Elwood through this, his family tends to ostracize him. They send him off when they have parties and purposely hide company from him. The only person who halfway acknowledges him and his quirks is Aunt Veta, who talks to Elwood about Harvey. Myrtle Mae straight up tells her Aunt she’s leaving because of Elwood. Imagine how hard that could be on him.

Sure, it’s hard to care for someone who is mentally ill, but this is not how you treat them. You don’t exclude them from your family completely and rather try harder to include them. To Elwood’s family, he was simply a burden. Luckily, he seemed to be blissfully unaware of this, but it hurts me to watch.

Look, I know this is the 50s and things were different back then, but is it too much to ask that a family love their family member?

Am I Overanalyzing This?

Is it possible I’m looking too far into what should be a sweet movie? Possibly — I tend to do that. I mean, it is a sweet movie — probably one of James Stewart’s best. I love the roles where Stewart gets to be a lovable, adorable character.

But I’m not the only one who thinks that this movie is a little jacked. I’m reminded of a scene in Field of Dreams (1989) (don’t ask me why I have this specific scene in my head). Ray’s (Kevin Costner) children are watching Harvey on TV one morning and he tells them to turn it off because it’s a disturbing movie about a very sick person. Of course, this would be foreshadowing for later in the movie when Ray would also end up seeing visions of baseball players in his cornfield.

But he has a point. It is a movie about a very sick man who is seeing some pretty disturbing stuff. It isn’t necessarily something to romanticize or even show to little kids who don’t understand what’s happening.

And yet, I still love Harvey. It’s pretty disturbing and sad, despite its comedic label, but I really enjoy it. James Stewart is so great at playing innocent characters. I love the child-like wonder that Harvey has throughout. As strange as it is, it’s still one I like to return to.

That or Donnie Darko. Both are basically the same movie.

Thank you for reading! What are your thoughts on Harvey? Comment down below!

Big fan of the movie, but yeah I agree that it’s a drama, not a comedy.

I would love to see a remake of this!

I think the comedy is there for the 1950’s. The USA has been out of prohibition for almost 30 years, I think that may be where the comedy is coming from?

Fair point but it still feels too dark to truly be a comedy.

The Uncomfortable Brilliance of ‘Shiva Baby’