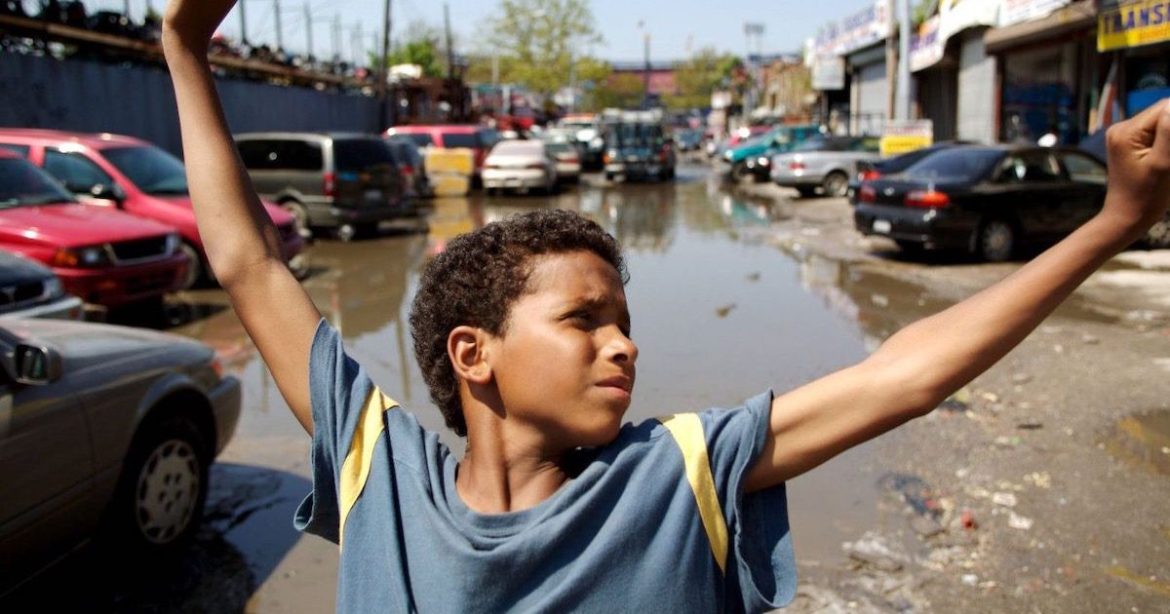 For all the griping we do collectively when child performances go wrong, we don’t often give them enough praise when they go right. Sure, even the best actors can struggle to connect with an unsteady child. Or, in the case of American Sniper, you bypass the possible frustration altogether by forcing Bradley Cooper to cuddle a hilariously fake baby doll instead. When they go right, however, there’s not much that matches them. The ability to capture childlike wonder is a magical thing, and the juxtaposition of childhood innocence with grave circumstances can be a real gut punch. If captured honestly, seeing life through a child’s eyes is one of the most overwhelmingly affecting perspectives cinema has to offer.

Over the last few decades, there are few child performances better than Alejandro Polanco’s in Ramin Bahrani’s Chop Shop, which releases on The Criterion Collection this month. Rarely is he not in the frame; he’s the engine to this sobering, if still hopeful view into a scrappy lifestyle in New York City.

A (Not so) Typical Day

The film begins early one morning with twelve-year-old Alejandro (played by Polanco and referred to as “Ale” throughout the film) in the middle of a crowd of adults waiting for work assignments for the day. The camera doesn’t even put him in the middle of the frame, which is an interestingly inauspicious introduction to our lead character. It seems to signal he’s just part of the group. There’s nothing special about this morning; he’s done this so many times before.

A truck arrives and the driver says he’s looking for two workers. Ale runs to the front, but the man insists he’s not needed. Ale jumps on the back of the truck anyway, but once the man realizes, he pulls the car over, puts Ale on the sidewalk, and gives him some money for breakfast before driving away. Rather than sulking, Ale gets a hold of his friend Carlos and together, they ride the subway all day selling candy to passengers. Ale is impressively mature in these moments: after the subway doors close, Ale addresses the entire car with a speech he’s clearly rehearsed so times he can blurt it out without even thinking.

Hustling is his life. When one opportunity closes, he immediately moves onto the next one. Ale’s quiet courage is so freaking admirable — so many doors have closed in his face that he doesn’t even think about flinching when the next one slams shut. Although, he’s still twelve, and has no parental figure in his life. We don’t know when he last went to school. His attitudes are all survival mechanisms: he learned to be so personable and crafty because his life literally depends on it.

After a day of riding the subway, Carlos mentions that Rob, an owner of one of many auto repair shops in Willets Point, Queens, is looking for new workers. Naturally, Ale jumps at the opportunity and begins working immediately. In addition to paying him in cash at the end of each day (you know, because he’s twelve and child labor laws are things that exist), Rob lets Ale live in the office on the second floor of his shop. He’s soon joined by his older sister Izzy (Isamar Gonzales), who begins working at a food truck that sells to the workers of the many auto shops at Willets Point. They hope that by pulling their money together they can save up to buy a food truck of their own.

There are a ton of similarities to Ramin Bahrani’s previous film, Man Push Cart. Much of the film follows Ale and his monotonous daily activities at the shop. The noise from all shops surrounds him. (I imagine I would start to lose it if all I heard was the whining of electric drills all day.) But not surprisingly, he’s really useful. He makes for a GREAT guide as he beats adults from other shops out to cars looking for repairs and ushers them over to Rob’s garage. Ale works on the cars too, whether it be sanding, bumper repair, or any other kind of work a twelve-year-old kid could possibly handle.

Chop Shop is still a very small, neorealist story, but while Man Push Cart was mostly focused on one person, Ahmad, the setting here allows for an intimate portrayal of Ale and also everyone around him, which not only sheds light on a person on the margins of society struggling to get by, but their culture as well.

From the description I’ve given so far, Rob could seem like a total scumbag for using Ale as labor at his shop. In actuality, he’s a no-nonsense guy who just wants to run his business. In his own way, he shows a lot of respect and care for Ale — he treats him like he does everyone else in the shop, and even entrusts Ale to lock up his shop at night. They rely on each other in a sense. The same goes for almost everyone else too. Of course, there are some swindlers and criminals in the bunch, but they’re just doing what they can to get by.

Willets Point (also called the Iron Triangle) is very much alive. Ramin Bahrani explores the area and its people beautifully without ever calling attention to himself — the filmmaking is highly observational and natural. Except for a supporting role by Ahmad Razvi (Ahmad from Man Push Cart), none of the cast members had any prior acting experience — almost everyone you see actually worked in those auto shops at the time. You wouldn’t have it any other way, though. They create an atmosphere that is so true to life. A cast of trained actors would never be able to recapture how authentic Chop Shop feels.

Comparisons to The Florida Project

You have to wonder if Sean Baker was inspired by Chop Shop or not when creating The Florida Project; regardless, the two films make for a pretty great double feature. On the list of great child performances, Brooklynn Prince’s work as Moonee is unquestionably up there with Alejandro Polanco’s turn as Ale. Both are impeccable at presenting a certain child spirit, one that shows just how clever they are while also expressing how they’re often naive to their harsh reality, either by being mostly unaware of it (in the case of Moonee in The Florida Project) or refusing to give in to it (Ale in Chop Shop).

Ale’s sister Izzy also takes to sex work for money like Halley (Bria Vinaite) in The Florida Project. Chop Shop never condemns Izzy for doing so — and the film never reaches something close to the heart-wrenching climax of The Florida Project — but it makes for a fascinating dynamic between her and Ale. He takes on a pseudo-father figure role to Izzy: she still wants to go to the occasional party and see friends, while Ale is singularly focused on scrounging enough money to buy their food truck.

However, the most poignant and thematically rich comparison between the two is the concept of a richer life that is just out of reach. For Moonee, she lives in a tacky motel in the shadow of Disney World; Ale lives and works right next to Shea Stadium in Queens, the home of the New York Mets. The most moving shot in Chop Shop has Ale and Carlos peering into a game from behind a fence, the crowd buzzing in the background. You can’t help but think of the tear-jerking moment in The Florida Project where Halley, Moonee, and her Moonee’s friend watch Magic Kingdom fireworks from the motel lawn. They’re all firmly on the sidelines.

For Chop Shop, this glimmer of another life has an added level of real-life tragedy. Shea Stadium was demolished in 2008, a year after the film was released, and replaced by the Mets’ new stadium, Citi Field. The Iron Triangle is also no more — it’s shops, housing, and entertainment centers now. Who knows where kids like Ale congregate now, or if they’re taken care of at all.

Thank you for reading! What are your thoughts on Chop Shop? Comment down below!

‘The Last Shift’ Is an Earnest Depiction of...

‘The Five Rules of Success’ Is a Trippy...