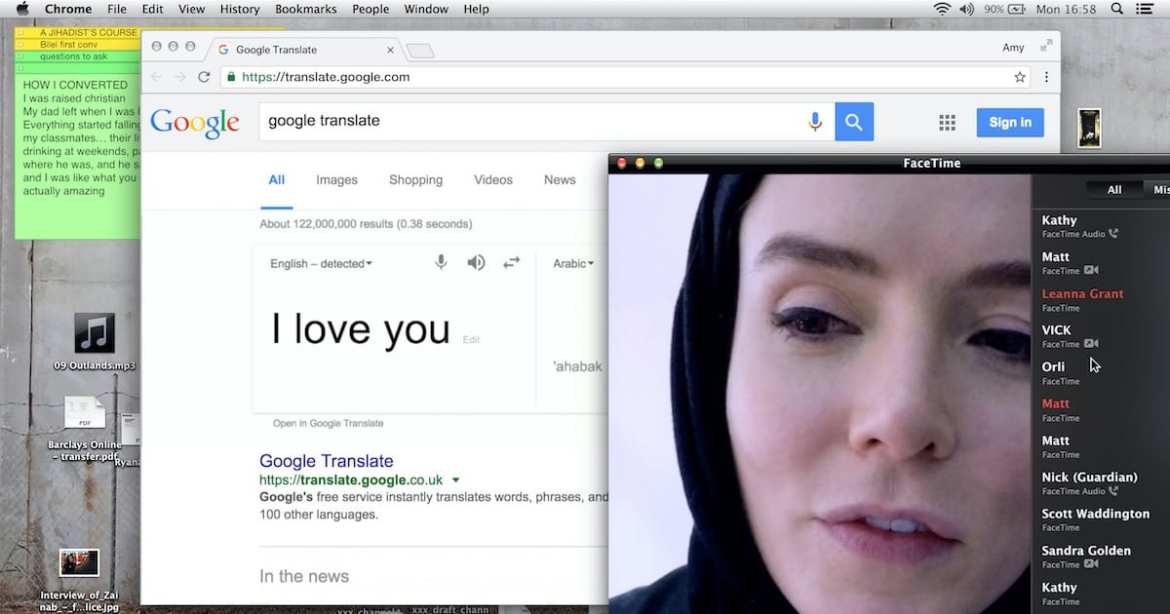 Profile is a story delivered in a repetitive pattern by Timur Bekmambetov who is now mostly known for producing Screenlife hits like Unfriended and Searching. A film that came out at an opportune time since we’re slowly leaving the COVID-19 era, and people have had to look at screens non-stop for work, social gatherings, etc. The film is based on the book In the Skin of a Jihadist: A Young Journalist Enters the Isis Recruitment Network by French journalist Anna Érelle. Anna Érelle, of course, is a pseudonym for the reporter’s actual name as she’s still in hiding from ISIS.

The book is an exposé on how ISIS recruited young women into their organization by manipulating their victims with delusions of grandeur. The story has since forced Anna to change her name and address. Anna Érelle is still under constant threat from ISIS who wants her dead for revealing the truth. In an article from The New York Post, Anna has changed her number several times, she has moved from her home in Paris. Before she moved, the police had to be parked outside her home since January 7th, 2015. The police even had to take her dog away because ISIS knew what her dog looked like. When asked if she would do it all over again, despite the consequences, Anna said, “For sure.”

Profile vs. The Truth

The film offers the same concept, but there are still differences that separate the film from the actual story. The film takes place in 2014, during a time when female teenagers are leaving their lives behind to join ISIS. “Amy” (Valene Kane), a veteran journalist in London, decides to go online and pose as a recently converted Muslim in an attempt to find a recruiter for ISIS. She creates a fake profile, researches where and how to find these recruiters, and starts everything with a few likes and shares.

One significant moment in the film is the motivation for Amy’s pursuit of this story and it revolves around a teenage girl who left home for ISIS. This girl was a perfect target for the group because she fit the profile of someone who is easily manipulated. A loner who was trying to find her place in the world and be a part of something special. Unfortunately, a recruiter got to her first and she became a victim of an illusion that would destroy her life.

Amy’s goal is to further understand how the terrorist group is finding its victims. Amy does the research and is able to set up the ruse after a few conversations between her editor and a co-worker (who also serves as a translator). Quickly, she’s contacted by Bilel (Shazad Latif) over social media, and her descent down the rabbit hole begins.

Bilel immediately comes off as a handsome man who you would think be on the cover of Men’s Health rather than a terrorist. The more their conversations ensue, the more Amy begins to unravel the techniques used by the recruiters to get women to join their cause. In a way, the film also provides Bilel’s point of view on how he sees the world and why he fights for ISIS. What we see as horror, he sees as liberation and what life should be like for people like him.

It’s Bilel’s point of view that Amy must adopt to get close to him, and it works for a short time, but it becomes awkward to a point. The conversations between them start casually, but eventually, it always leads to Bilel constantly asking her when she’s going to leave and join him. As the film progresses, he constantly seduces her with the promise of a life without worry. Amy would have a fancy house, money would never be an issue and she wouldn’t have to work. It feels like watching a pedophile trying to lure a child into their car using candy; creepy and disturbing.

It’s a pattern that keeps repeating itself to the point that some viewers might lose interest after a while. Amy eventually falls for Bilel’s tricks and her real life slowly starts falling apart. There’s also the cliché drama with Amy’s real boyfriend and job issues that everyone has seen in countless movies. One partner is more concerned with their job, the other feels left out, and the drama starts. It’s every bit of the word, boring.

Profile does show a few interesting techniques as we see Amy’s life crumble through text messages and video chats, but that’s been Bekmambetov’s modus operandi for a while now. Bekmambetov’s Screenlife style might be a disadvantage at the current moment. Without a nuanced take on the material, some may simply tune out after having to look at computer screens for months on end. Plus, for this particular story, it isn’t entirely rewarding as it’s missing what’s happing off-screen, which is necessary to round out these characters.

I’m not sure if information to fill in character gaps was left out to protect Anna Érelle, and it’s perfectly acceptable in that case. Anna is still in danger, and any details might help those looking for her. Technology makes it incredibly difficult to hide. Regardless, you get the sense some things were excluded, which makes this film hard to connect to.

Profile gets straight to the point without giving any real details on each matter. This is Amy, she’s in a relationship that we don’t know anything much about, and she’s a journalist in London. There are a few irrelevant conversations with her mother and her boyfriend that work to establish she has some kind of a life off-screen, but with no real explanation. She has no conversations with her father, so is her father alive or just divorced from her mother? How did she meet her significant other and how long have they been together?

The lack of backstory in Amy’s life is a real handicap as the film continues. Amy’s relationship with her real boyfriend feels irrelevant to the point where you think, why bother? They only have two or three real conversations throughout the whole movie, so it’s hard to feel any connection or sympathy when their relationship begins to break down.

The first 45 minutes or so drags and the film feels like it has been on for hours. The film starts to become interesting when Amy begins to question everything. Even then, it’s hard to see how Amy is falling for Bilel due to the various time jumps. Most conversations are short, then a large time jump occurs, so it’s hard to see the bond form.

Some of the video calls try to show Bilel as normal by playing with friends, cooking, or working out. He tries to have civil conversations with Amy to gain her trust and reveals things about himself that you wouldn’t expect to hear. However, they’re immediately undercut by Bilel’s sexist remarks about how “Amy will be taking care of him when he comes home. Or how he can’t wait for her to come to Syria so she can be properly ‘trained’ — all she has to do is be happy is clean, cook, and take care of the children. His intentions are always abundantly clear.

The few moments where Profile catches my attention are when Amy starts to feel a real connection with Bilel and he starts showing her some of what he goes through in Syria. During the film, Bilel shows propaganda that’s meant to encourage violence against a foreign power and join the group. This propaganda ranges from videos of unprovoked attacks with highlighting children as the main victims and violation of human rights from occupying forces. For a time, you can hear how Amy might believe what Bilel is telling her.

Believe It or Not

Shazad’s performance as Bilel peaks as he discusses when he used to live in London and was driven to ISIS because of racism. His story of repeated acts against him because his family is from Pakistan is a turning point in the film. At first, I believed that this was just a story he made up to gain sympathy from Amy so she would be drawn in. Turns out it’s true because the film reveals Bilel’s actual name and his history in England. In Bilel’s mind, he’s the hero of his own story.

Valene Kan and Shazad Latif have interesting chemistry together considering they have a virtual relationship. At first thought, it’s hard to believe that an experienced journalist would unravel in this way, but both actors are very believable. As hard as these two try, however, the problems in this film are too much to be blinded by any amount of good acting. You begin to wonder if Profile might have been better as a documentary rather than a fictionalized narrative.

Thank you for reading! What are your thoughts on Profile? Comment down below!