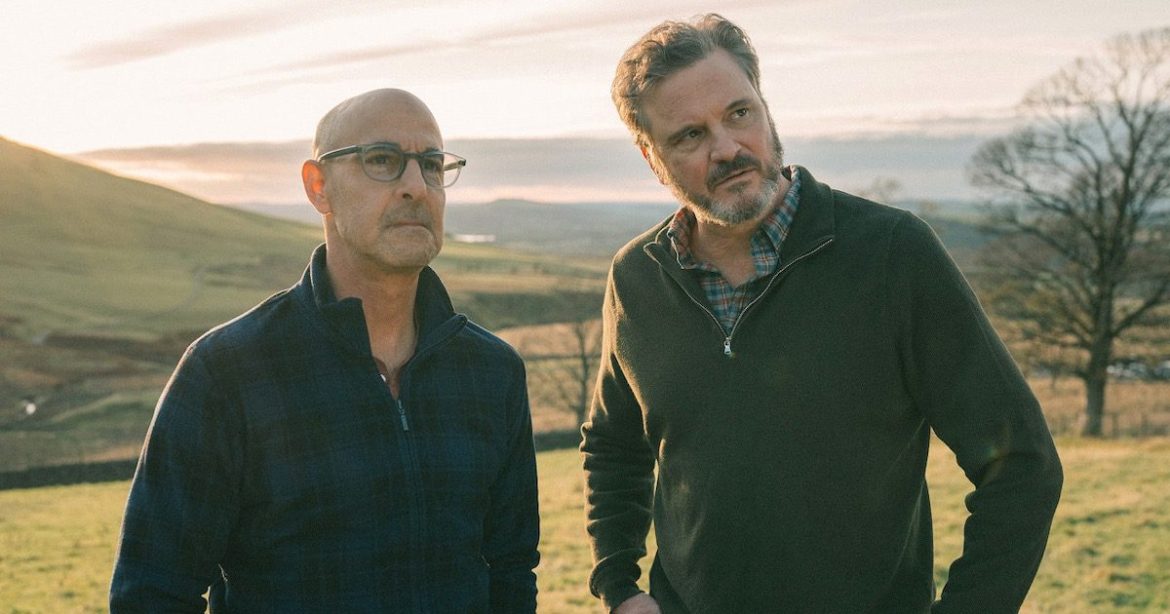 Much as its title would suggest, Supernova is a burst of emotions, a catastrophically gradual decline towards poignant devastation. Harry Macqueen’s film, which premiered at this year’s San Sebastián International Film Festival, tells the intimate, touching story of two partners, Sam and Tusker, traveling across England and reuniting with friends and family, as they deal with Tusker’s deterioration amid his deterrents of dealing with early-onset dementia.

It’s a breathtakingly gorgeous work, flowing through with so much tenderness and warmth, and in that intimacy and endearment, it’s thoroughly human, embraced by adoringly kind performances from Colin Firth, and, dare I say a career-best, Stanley Tucci, who remarkably evokes the raw desolation and sorrow of eventually losing himself, all the while maintaining a strong and optimistically decisive front to support the worrying concerns of loss and loneliness that plague and will continue to haunt his husband.

There’s a divinely warm, tender chemistry between Firth and Tucci that makes this feel so entirely realistic and tangible; all the more harrowing on our emotions as we follow them on this small journey into their lives as they mingle with friends, family, and each other against the backdrop of a disorder far beyond their own control that is inconsolably eating away at Tusker’s ability to perceive the world around him, including the relationship with his husband that is kindly at the forefront of the film. It controls a lot of the film’s atmosphere really, setting for a somber — in light of Tusker’s disorder — but adoring, personal, and sweet tone that drives Supernova‘s conflictingly melancholic yet wholesome and loving plot.

It deals with the devastation and deterioration of dementia in heavy but pleasantly cherishing ways that truly highlight and put on a pedestal the power, determination, and perpetuity of love and the pure, intense feeling of connection, devotion, and endearment that follows it. Precisely, that is the emotional power Supernova possesses deeply within its passionately sewn narrative. It’s a passionate affair of circumstances and reunions that amplify the infinite, boundless actuality of love and its impact, and among that, how love is the one way to cope with loss and sorrow amongst the inconsolable idea of losing one’s self. It is profoundly found that with love, we get to overpower the mellow worries, riddling pains, and grieving agonies that hold us back from living as we should — freely, passionately, and with every ounce of love we can hope to give, take and share through our time together on this plane.

A lovely ode to the presence and impact of love over everything else, Supernova shines brightly with a message that love powers over all; even in sickness, in grief, in loss, and in posterity. Standout performances from Firth and, particularly, Tucci, accompanied by a touching, piano-driven score, accentuate this as one of the year’s finest films. In its small, tender moments of shared words, brief glances, and passionate interactions to its existentially personal premise of grief and the fear of solitude, Supernova presents love and its ardor in the most realistic and genuine forms; it begs you to hold tight emotionally and won’t let go until its tearful final minutes.

Supernova is screening online as part of the London Film Festival, running from October 7th – October 18th. To view the full program and buy tickets, head to bfi.org.uk/london-film-festival.

Thank you for reading! What are your thoughts on Supernova? Comment down below!

How ‘Rebecca’ Set the Table for Hitchcock’s Hollywood...

‘Weathering with You’ Shines Brightly as a Delightful...