‘The Mitchells vs. the Machines’ Is Another Resounding Win for Sony Pictures Animation 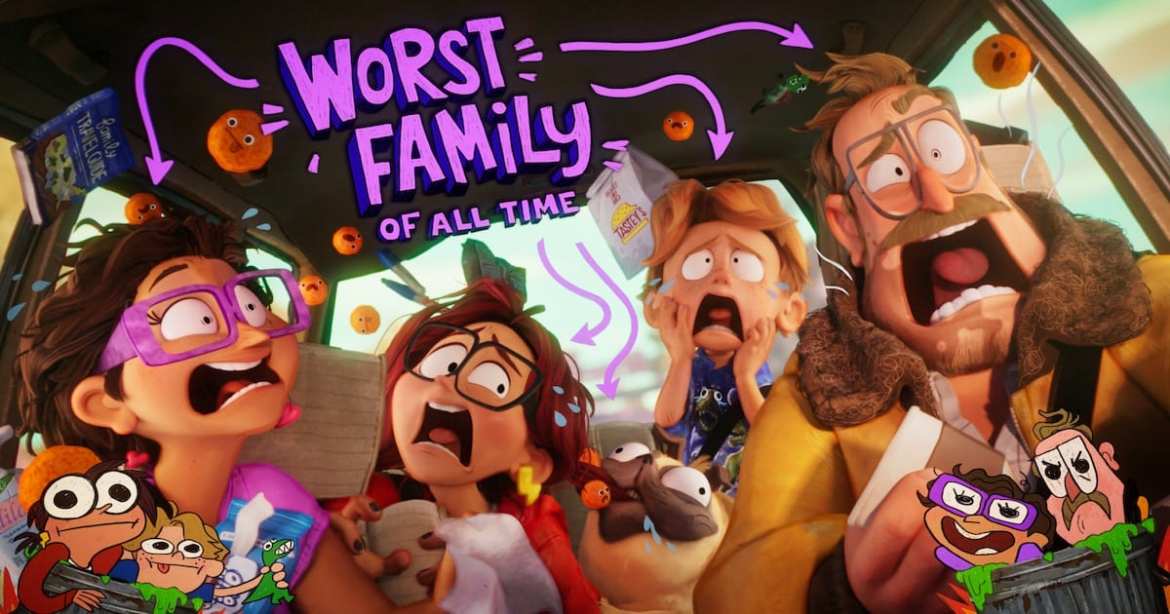 All hail Phil Lord and Christopher Miller, purveyors of all things deliriously unhinged, meta, and yet still somehow deeply thoughtful. I still contend one of the biggest mistakes in blockbuster moviemaking the last decade was Disney balking on their vision for Solo: A Star Wars Story I Watched Once and Immediately Forgot About. As far as mainstream entertainment goes, they’re two of the most important voices — either in live-action or animation — that we have at the moment.

To be fair, they only serve as producers on The Mitchells vs. the Machines. The credit should go to Michael Rianda and Jeff Rowe, who shared both writing and directing duties. (Don’t worry, after this opening preamble, they will be getting their fair share.) But Lord and Miller have proven themselves as insanely creative forces, whether that means directing, writing, or shepherding lovably bizarre projects as producers. Between Into the Spider-Verse and The Mitchells vs. the Machines, they’ve vaulted Sony Pictures Animation into a previously unforeseen level of animation excellence.

Katie Mitchell (voiced by Abbi Jacobson) is probably a great follow on Film Twitter. She’s grown up making countless films on her phone (most of them utilizing her cross-eyed dog Monchi) and uploading them to YouTube. They’re affectionate parodies of real movies, like Dial “B” for Burger. (There are so many AMAZING movie references, from Portrait of an Idiot on Fire to this universe’s version of the Criterion Collection and Kino Lorber, the “K” Collection. She’s got great taste.) She’s also a queer character, and immediately one of the best examples of LGBTQ representation in modern animation. One whose sexuality isn’t her only character trait like comparable characters in many other recent mainstream films, but a part (if still an important one) of a wonderfully well-rounded character. She’s about to head off to film school in Los Angeles, and the rest of her family is sad to see her go. Her nine-year-old brother, Aaron (voiced by Michael Rianda) is really into dinosaurs and views Katie as his best friend. Her mother, Linda (voiced by Maya Rudolph), is the super eager and supportive type who is far too obsessed with Instagram.

And then there’s her dad, Rick (voiced by Danny McBride), the “all technology is frightening” parent stereotype you’ve seen before that is played with far more depth this time around. He and Katie used to be incredibly close, but have grown apart as Katie has grown up. The film shows plenty of home videos with adorable moments between the two, including a nostalgic singing of T.I. and Rihanna’s “Live Your Life”. The fact that we’re now nostalgic for “Live Your Life” enough to make it an important piece of bonding for two characters in a movie is terrifying to think about, something that helps you identify with Rick in his out-of-touch state. In an instant, it’s like he no longer knows who his daughter is anymore.

After a disagreement, Rick and the rest of the family offer to drive Katie all the way to film school. Well, he doesn’t offer — he cancels her plane ticket and forces her to go on the bonding trip.

Meanwhile, Big Tech is at it again with Mark Bowman (voiced by Eric André), the creator of PAL labs — an Apple riff with all the safety guards turned off — about to present the company’s latest creation of servant robots. Immediately, his robots turns on him — led by the initial PAL operating system voice by Olivia Colman — and start hunting down all of humanity with the goal of shooting all of mankind into space.

Already on the road, the Mitchells have to act quickly for their survival. Naturally, the family isn’t initially great at working together in this life-or-death situation. They want to help each other, but they’re communicating on different wavelengths. It’s the element I love most about The Mitchells vs. The Machines: everyone is a good person, there are no unnecessarily evil family members that are won over later on by some trite speech. The film actually goes to great lengths to undercut such overused emotional beats. Each person just needs to learn how to see and respect the rest for who they are and understand their differences. It’s a family that wants to be inclusive of everyone’s idiosyncrasies, and their struggles to get to that point are beautifully heartfelt.

Katie remarks at the beginning of the film, “Most action heroes have a lot of strengths,” before saying, “my family only has weaknesses.” But as the rest of the film bears out, the greatest strength a family unit can have is the ability to communicate. The best being Rick’s arc of learning to understand technology as a stand-in for comprehending Katie’s queerness while Katie learns maybe holding his hand along the way isn’t the worst thing in the world. The compromise comes not in each having to change their personalities, but in how they share what they love with each other. 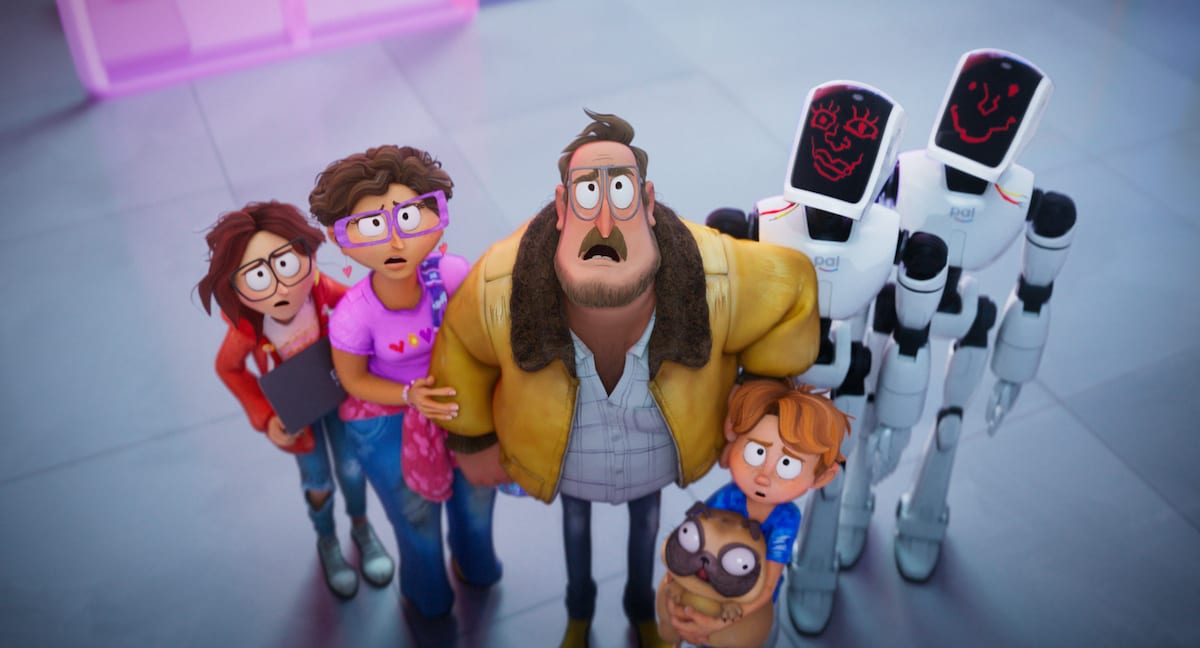 A Gigantic Furby Screams in Evil Tongues. What More Do You Need?!?!?!

The “bad technology wants to wipe out the human race” plot isn’t the newest conceit around, but you haven’t seen it quite like this before. The Mitchells vs. The Machines is positively daffy. Its hyper pace and multimedia animation style threatens to leave you in the dust if you’re not totally up for it, but in that pursuit, it picks up where Into the Spider-Verse left off in pushing what animation can achieve.

Rianda, Lowe, and the animation team mix 2D and 3D styles with crude drawings, memes, and other viral YouTube clips. Those last two sound like a recipe for excessive pandering, but they work quite well, even working as an extension for how Katie sees the world in her short films. It’s one of the few examples of Tik-Tok-inspired editing to actually deepen our understanding of a character rather than acting just as an imitation.

And yes, you read that section header correctly! Along with an evil Furby that’s multiple stories tall, the film packs in plenty of irreverent insanity into each moment. The comedy within is the kind of full-throttle approach I greatly admire. At the same time, it stays nuanced enough so that it never sermonizes on the evils of technology or forgets to critique the very consumerism it displays. Astutely, Rianda and Lowe know that it’s ultimately up to humans to decide how they interact with it all.

You Can Keep Your Homogenous Animation Style, Disney

We’ve come a long way since The Emoji Movie. Sony Pictures Animation is still good for a clunker or two every now and then, but they’re cementing their place as a home for creative teams and animators who want to push the envelope. I adore how truly bizarre this movie is in almost every department, from Fred Armisen voicing a robot known as “Deborahbot” to the main character being a massive Lynne Ramsay fan. How something this odd got made is beyond me, but I’m forever grateful it exists.

Thank you for reading! What are your thoughts on The Mitchells vs. the Machines? Comment down below!

‘The Father’: A Unique, Devastating Look at Dementia