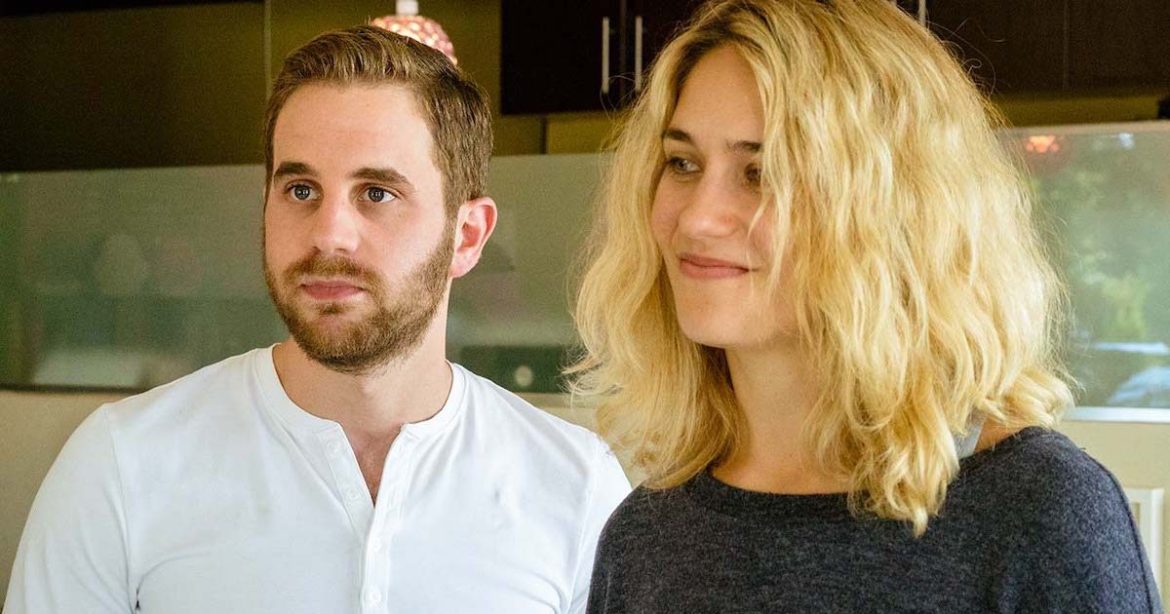 Ben Platt, a man of many talents. He once again showcases his raw, exquisite acting skills in Peter Sattler’s Broken Diamonds. Scott (Platt) is an aspiring author, longing to move to Paris. His flights are booked and he’s learning his last few French phrases before he leaves. The dream he has of moving is finally becoming a reality. In the midst of a going-away party with his friends, he receives a call from his stepmom telling him that his father has passed away. He’s left in charge of his older sister, Cindy (Lola Kirke), who is receiving treatment at a mental hospital. Together, they must navigate through the next few days without it being too much for Cindy, as she is taken off of her medication and is forced to deal with her father’s death in her own head.

A film that deals with both death and mental illness gracefully is hard to come across. With Broken Diamonds, director Peter Sattler (Camp X-Ray with Kristen Stewart) is able to capture schizophrenia in a realistic light. Lola Kirke is phenomenal in her role as Cindy. She offers a truly remarkable performance. Kirke’s talent has always shined through with her previous roles. I wouldn’t be surprised if Kirke is on our screens more often after this. Yvette Nicole Brown as Cookie, Cindy and Scott’s stepmom, and is as wonderful as ever.

It goes without saying that Ben Platt is an incredible actor. He handles tough emotional beats effortlessly. Scott is the ideal part for him. After playing the lead in Broadway’s Dear Evan Hansen and Payton Hobart in The Politician, Platt’s role in Broken Diamonds only extends his talents further. Platt always has the ability to make every character he plays the center of attention. Here, he does just that. Perhaps the spotlight is taken slightly more off of Kirke’s performance, which should be applauded more than Platt’s, but the film is more so focused on how Scott and his mom have dealt with Cindy while growing up. Their mom has moved away, and now Scott needs his own escape, and to finally do what he loves.

The tension that builds up between Scott and Cindy as the film progresses shows how intricate their relationship is. Scott cares so much for Cindy, but doesn’t want to put his entire life on hold for her. Films that deal with a loss of a family member often go off track, or don’t highlight the feelings in the days immediately after. Broken Diamonds delivers a unique perspective on the aftermath of losing a parent, revealing how hard it is to return to normalcy. Cindy is already badly affected by her mental illness; upon hearing of her father’s passing, she automatically blames herself. She has nothing to do with it, but in her mind, she believes she does. Sattler made this film with the belief that people need to talk more about schizophrenia, and rightly so. Blending both comedy and mental illness isn’t easy, but Broken Diamonds does a great job of combining the two.

It’s a good base film to be able to teach people about schizophrenia, nevertheless, it could have been more interesting. Sometimes the direction falls slightly flat. You can see the end coming from a mile away. It’s a predictable watch, but that’s not always a bad thing. It’s not a film that has to have some spectacular ending. It needs to feel honest, and it succeeds there. The way Broken Diamonds manages to tackle mental health on screen is a step in the right direction for inclusivity in film.

The film is essentially about forgiveness. You need to forgive yourself, forgive others, and try to make the most out of life. Spending your time dwelling on the past won’t help you move on and be happy. Having someone with a mental illness in the family is not an obstacle. It’s something you have to learn to deal with. Talking about it removes any previous stigma. Broken Diamonds often echoes Girl, Interrupted, which famously tackles mental illness in a very genuine light. It’s stylized slightly, but real enough to be able to understand the message the screenwriters are trying to put across. We need more films like this. The comedic-serious blend makes for an interesting, yet touching watch.

Thanks for reading! What did you think of Broken Diamonds? Comment down below!

‘Driveways’ is One of the Best Films of...