Few arguments seem more daunting in 2021 than taking the stance that Nicolas Cage is a good actor. Best known in 2021 as the man who stole the Declaration of Independence, or perhaps more unfortunately as the star of 20-30 little-seen or much-maligned B-movies since then, largely gone are the memories of Raising Arizona, his Oscar win for Leaving Las Vegas, or even his undisputed action stardom of the late 90s (The Rock, Con Air, Face/Off, and Gone in 60 Seconds #forever). His acting style — often extreme, unhinged, and loud — is rarely given credit for what it also is: charismatic, flamboyant, and not at all easy to do. Perhaps he employs his tricks too much to earn the respect he deserves for them, or perhaps he routinely picks admittedly awful films to showcase his talents in. Either way, it’s time to end this nonsense discourse.

Over the past few years, Cage has quietly made his way back into the good grace’s of critics with interesting, oft-gruesome indie films that have won him a fair amount of praise. However you feel about Mandy, Color Out of Space, or Willy’s Wonderland (to name a few), you’d be hard-pressed to argue that Nicolas Cage’s performances are anything other than pitch-perfect. So, as I approached Pig, I felt I knew exactly what to expect from this era of Cage: hyper-violence, big performances, and a wild premise that perfectly showcases Cage’s famous dial-at-11 style.

Instead, Pig asks Cage to be something radical at this stage of his career: small, somber, and moving.

Michael Sarnoski’s debut feature begins in the Oregon wilderness, where Rob (Cage) lives in a remote cabin with his prized truffle-hunting pig. His only visitor is a posh, self-centered entrepreneur named Amir (Alex Wolff), who buys Rob’s truffles in exchange for basic food and necessity deliveries. This seemingly long-term arrangement would likely continue in perpetuity, except one night, men break into Rob’s cabin under the cover of darkness to assault Rob and steal his beloved pig. What follows is a winding quest to find her that takes Rob back into a world he tried to leave behind a long time ago.

You think you know where this story goes: it’s Taken, but with a pig. It’s John Wick: Para-Bacon. Except that the world Rob left behind is the high-end restaurant scene of Portland, Oregon, and the quest he embarks on is more Anthony Bourdain than it is John Wick. Each time the film veers in a direction where Cage feels poised to fly off the handle — such as a strange foray into the underground world of restaurant worker fight club — he never does. He takes his lumps — physical and verbal alike — and moves on with his journey. 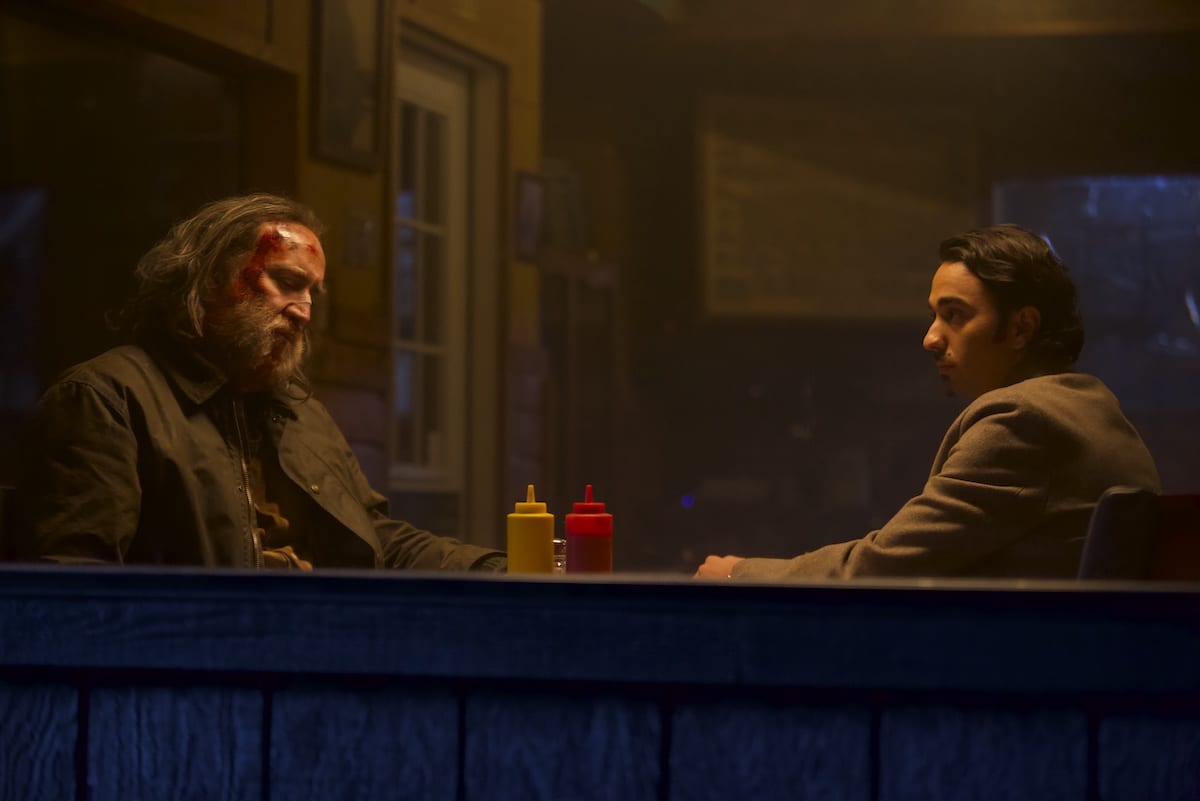 Cage brings raw authenticity to each performance he throws himself into, but here he stands out for his quiet earnestness.

Broken, sad, yet driven nonetheless, Cage’s quiet presence lights up every scene with blunt humor and moving tenderness. Left alone this film might sag under the introverted nature of Rob, but luckily Wolff’s Amir emerges as an unlikely buddy to the quiet hermit, helping Rob find his pig but slowly uncovering the larger mystery and meaning behind Rob’s life before he took to the wilderness.

I’m not sure that Pig is a good film. It asks us to connect too many dots in the strange, illogical restaurant world that it constructed for itself, and sometimes it’s hard to know if Sarnoski intended for us to laugh at certain dialogue that is positively absurd. But contrary to what I’m sure most (including myself) were expecting — it’s certainly not a bad film. Cage, Wolff, Adam Arkin, and other support cast members really hum in the small moments in between the events of the plodding quest. There’s a quiet but intense score from Alexis Grapsas and Philip Klein that maintains the somber, emotional tone of the film, and a few shots by cinematographer Patrick Scola that showcase the healing natural landscape of Oregon beautifully. It’s a strong — and certainly unique — directorial debut for Sarnoski, to say the least.

Pig knows exactly what it wants to be — even if we didn’t.

A profile in how loss kills more than just the person we lose, a rebuke of inauthentic, pretentious creation, and a reminder to hold close the memories that matter, Pig serves up a rather touching cinematic entrée in the least likely places. But unintentionally, I think that the film also gives us a meta-commentary on how to view Nicolas Cage in 2021.

As Rob sits — filthy and bloodied — in an ostentatious, gastronomical palace created by a former protégé who chose mainstream success over personal passion long ago, he chastises the chef for doing to what he thought people wanted, instead of sharing with the world what he loved to do. No matter how many unhinged Cage clip reels are assembled on YouTube or how many eye-rolls you might receive when you attempt to defend his talent, one thing will always be true about Nicolas Cage: he’s always given performances that are true to him. And that is what makes him authentic and singular, from Raising Arizona, to National Treasure, to Pig, and every Drive Angry in between.

Thank you for reading! What are your thoughts on Pig? Comment down below!

I was talking to my son about the bizarre career arc of Nicolas Cage the other day, while watching “Knowing” again. Not because the latter’s particularly good, but because I was in the mood for apocalyptic. Sometimes it’s hard to reconcile “Left Behind” with “Peggy Sue Got Married.” I’m not sure my son believe me about “Leaving Las Vegas.” Nicolas Cage. I think he’s the reason for SMH.

‘Color Out of Space’ is a Psychedelic Frightfest...