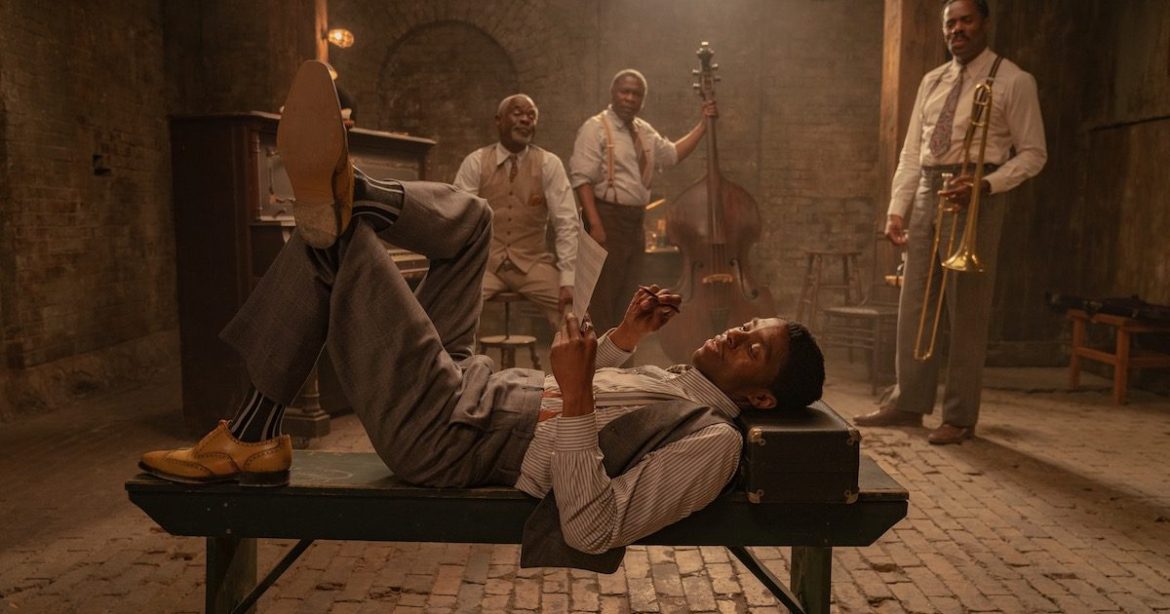 Every year, a day after the Oscars ceremony, I start writing an article about the awards for the following year. This year was no exception. Of the movies that I predicted to be nominated, some were postponed to 2021 because of a certain virus, others won’t make it because they were not as good as I hoped, but only one hadn’t been released. And that was Ma Rainey’s Black Bottom.

The reason I chose Ma Rainey’s Black Bottom is very simple. It’s Viola Davis. She is the first African-American actress to receive three Academy Award nominations, and also to achieve the Triple Crown of Acting: an Oscar, Tony, and Emmy. For me, she is the Black version of Meryl Streep. Both are all-around great actresses; they even acted together in Doubt, where she first caught my attention. And now, I am certain that Davis is on her way to receive more nominations and awards.

Of all the movies that I have seen this year (about three hundred and counting), Ma Rainey’s Black Bottom has the most impressive beginning. You see a dark forest and hear a series of eerie sounds: crickets chirping, running footsteps, barking dogs, and heavy panting. When you finally see two young men running, they slowly approach a bright light. People are waiting in line for a performance from Ma Rainey. After hardly two minutes, Viola Davis captivates you.

The acton then moves to Chicago in the 1920s. Ma Rainey’s band arrives in a shabby music studio. Tensions immediately rise with the white bosses when it becomes clear that Ma herself is running late. The musicians are escorted to a decrepit room, where they are supposed to rehearse. Instead, a lot of bickering starts, most of which started by the youngest band member and trumpet player, Levee. It quickly becomes clear that the arrogant womanizer is also ambitious; he wants to start his own band.

It took me some time before I recognized Chadwick Boseman as Levee. Somehow, it’s almost hard to believe that Black Panther and Norman Holloway (Da 5 Bloods) are played by the same actor. The differences between these three characters couldn’t be bigger. He’s great throughout, but there’s a specific moment in this movie when you realize what a huge talent Boseman was. When he talks about a racist attack on his parents, you can feel the grief and the trauma he struggles with. It’s even more painful when you know that the music industry is run by white people. Will it ever be possible for Levee to be successful with his own band?

Tensions rise even further when Viola Davis’ character — also called the Mother of the Blues — finally arrives. She is a diva, so much is clear. The studio is too hot and she won’t do anything before she has had three cold Coca-Cola’s. In the meantime, the band members keep arguing with each other. Ma Rainey also butts heads with her manager and producer, who have their own ideas about how her songs will be recorded. Will she finally regain control over her music? (By the way, whereas Ma Rainey is not fictional, Boseman’s character is.) 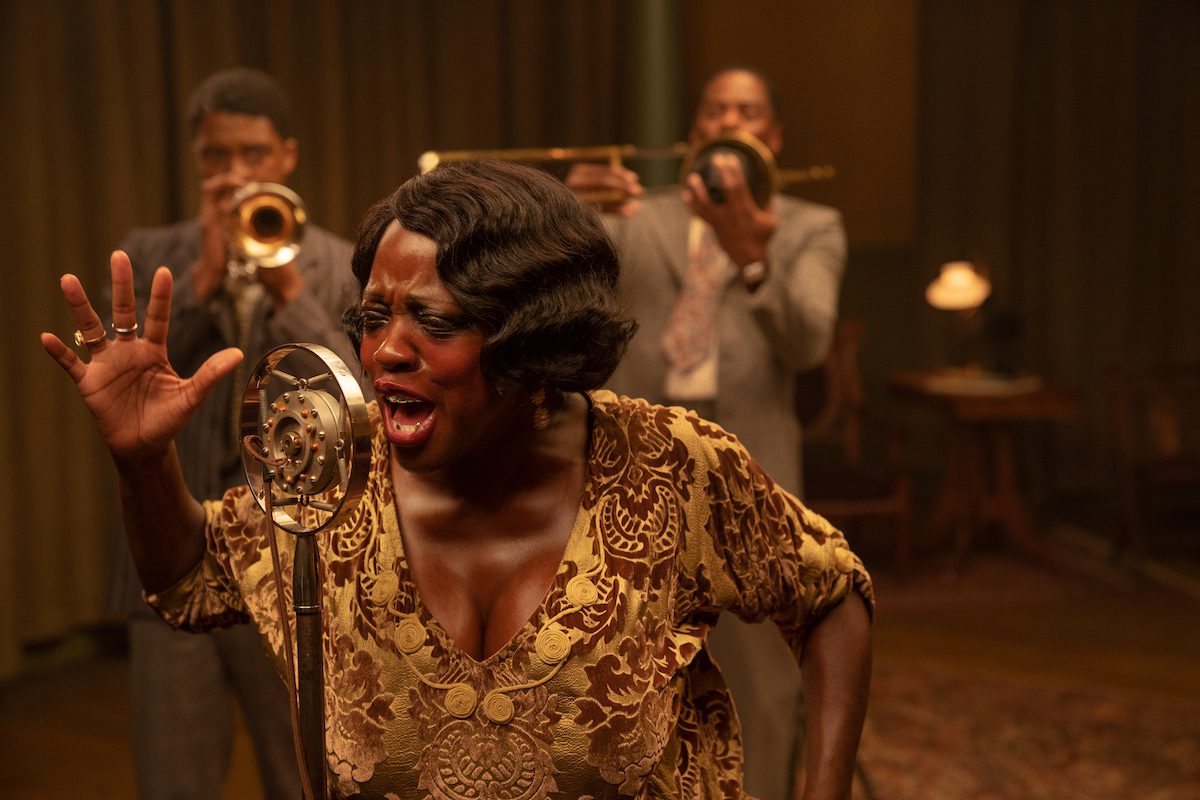 You don’t need a lot of words to describe Viola Davis’ performance. One suffices: phenomenal! It’s the way she talks. It’s the way she sings. It’s the way she moves her body. And finally: it’s the way she delivers herself to the blues. I was captivated by her acting in How to Get Away With Murder, but this is a whole new level. To be honest, I was so impressed that I had to rewatch certain scenes. I simply hadn’t caught what she had said because I was so entranced! I am almost desperate to see her get nominated for an Oscar again.

But there is so much more beauty in this movie. The cinematography is gorgeous, as are the set design and costumes. Yes, there were even moments that I wanted to be dressed like Ma Rainey. But this movie does even more than tickling one’s senses. Ma Rainey’s Black Bottom handles themes of racism in an intelligent, occasionally discrete way. I have already mentioned the scene about Levee’s parents. But the plight of African-Americans is also expressed in their music.

After all, the tagline of the movie is “Everything Comes Out In the Blues”. That is what Ma’s manager and producer don’t get. The blues is not just another genre of music. It’s more than a source of income. It reflects the soul of the African-Americans. Their values. Their beliefs. Their experiences. The only thing the manager and producer are interested in however is “catching [Ma’s] voice in a box”. They don’t care about the singer. It’s the money that counts. This is of course the reason why Ma Rainey is so adamant about singing the blues the way she wants it.

Director George C. Wolfe based the movie on a play by August Wilson. Another recent adaptation of one of August Wilson’s plays was Fences, which Denzel Washington produced, directed, and starred in. It’s also the movie that garnered Viola Davis her first Oscar. If I am to believe the general consensus, Davis is on her way to receive her fourth nomination here. And for Boseman, his first. The question remains, however: for which movie? Let’s not forget Da 5 Bloods!

Let’s face it. The Oscar race has a new frontrunner. Let’s hope it gets what it deserves, with possible nominations for acting, directing(?), cinematography, score, and best song(?). Or what about this: could Boseman be nominated for Best Actor for Ma Rainey’s and Best Supporting Actor for Da 5 Bloods? We will have to wait until March 15th. Because it’s an unusual year, we are still awaiting the release of a few more interesting movies for the Oscar race to fully take shape. But something tells me that Ma Rainey will prevail.

Thanks for reading! What are your thoughts on Ma Rainey’s Black Bottom? Comment down below!

Can’t Stand the Heat: Love and Hate on...