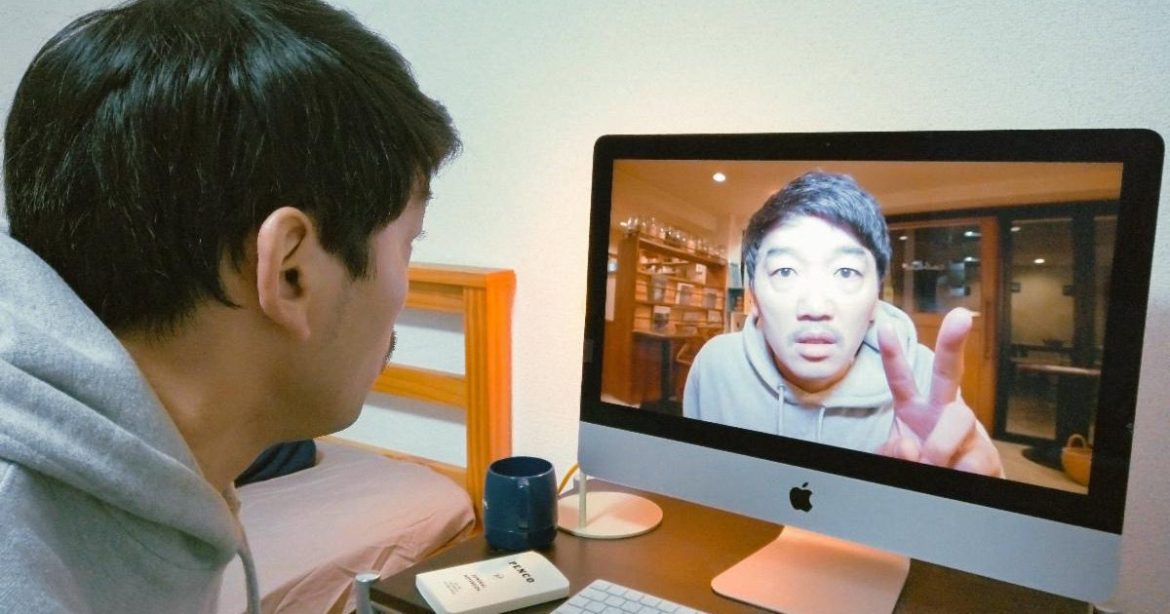 The PR machine for the film industry can sometimes be a nightmare as directors, actors, and others associated with a project do whatever they can to hype it up. After a while, the insane comparisons can be overwhelming. Captain America: The Winter Soldier is a mix of Three Days of the Condor, The Parallax View, and All the President’s Men. Loki is heavily influenced by Zodiac. Space Jam: A New Legacy is inspired by the works of Ernst Lubitsch.* The madness never stops! Beyond the Infinite Two Minutes is the rare exception, however. At first glance, its logline which compares it to Shinichirou Ueda‘s One Cut of the Dead and Christopher Nolan’s Tenet — two movies that could not be more different — may seem overly audacious. Or even absurd. But in practice, it’s shockingly spot-on.

At the end of the workday in his café, Kato (Kazunari Tosa) heads upstairs to his apartment to unwind and play some guitar when he’s almost immediately greeted by himself on his monitor that’s connected to another monitor downstairs; however, the version of him in the monitor claims to be from two minutes into the future, proving such by telling present Kato where his guitar pick is. Near-future Kato convinces present Kato to believe him, asking him to come downstairs and repeat exactly what he has just said to his past self. Kato does as he’s told, leading to the same conversation we just saw, only this time from the point of view of near-future Kato in the café.

The film operates entirely in these cyclical two-minute sequences. Even better, each sequence is precisely two minutes long! (I may or may not have timed a few scenes on my phone while watching.) And thanks to some clever photography, editing decisions, and possibly the longest extension chord in cinema history, Beyond the Infinite Two Minutes looks like it plays out in one extended take. There are timelines within timelines, and as Kato’s friends get involved, they only become more intricate. It’s when Ozawa (Yoshifumi Sakai) has the idea to put the two monitors in front of each other that things get really complicated. But the urge to go down a Tenet-esque Reddit rabbit hole to understand the film’s plot mechanics never comes as first-time director Junta Yamaguchi miraculously keeps everything clear. Everyone in the group might have to overly explain their love of science fiction concepts to do it, but it still gets done. Hilariously, the characters are dead set on closing the looping timelines in fear of creating a paradox. That makes it easier for the movie to stay organized, but also creates some fun metanarratives on the genre.

Beyond the Infinite Two Minutes‘ DIY spirit helps too: the film can’t become too unwieldy because it takes place entirely within a café and the apartments above it. Plus, thanks to the film’s wonderfully crisp 70-minute runtime, it ends long before it would have had to resort to trickery to up the ante.

The comparisons to One Cut of the Dead extend beyond the extremely long oner too. The film’s slapstick comedy is certainly cut from the same cloth; the cast’s overeager line delivery is always endearing. Most importantly, the entire crew has a palpable affection for genre storytelling that comes through early and often. You get the sense all of them are great friends that wanted to come together and share something they love. That spirit is too irresistible to not get behind.

For more information on Beyond the Infinite Two Minutes and other films playing at the Fantasia Film Festival, check out their website.

*I may have made this one up. But honestly, would you have been THAT surprised if it was real???

Thank you for reading! What are your thoughts on Beyond the Infinite Two Minutes? Comment down below!