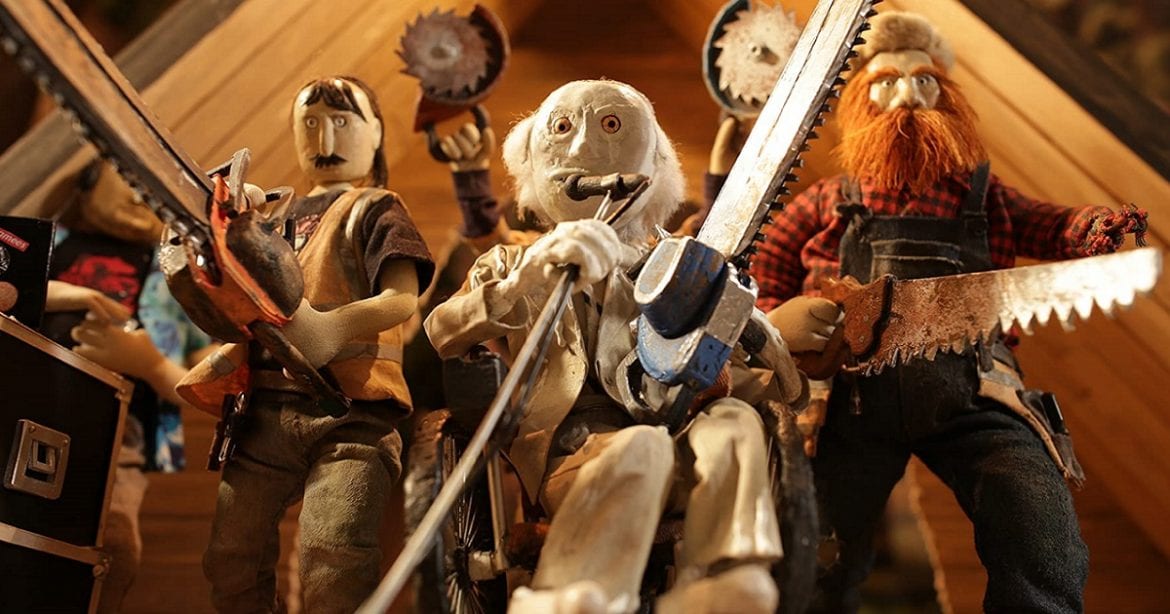 Genre festivals like Fantasia do incredible work in programming an eclectic variety of cinema that is proudly and unapologetically so far from the norm. Whether it’s films with bold and transgressive storytelling, films that are completely visceral and terrifying, or films that cannot be described as anything else other than “batshit insanity”. For that latter category, enter this vivaciously vulgar Estonian stop-motion animation adapted from Mikk Mägi and Oskar Lahemaa’s cult webseries.

The Old Man Movie opens with three city children being dumped on the doorstep of their deranged grandfather’s farm in the Baltic countryside. Immediately feeding their smartphones to a pig, the Old Man teaches his grandchildren the values of hard work and getting their hands dirty by showing them the ropes of being a milker. The Old Man is a local hero and the villagers go absolutely gaga for the milk, but he treats his prized cow with very little respect and care. Saddened by the abuse the Old Man has inflicted on the cow, one of the children sets her free.

However, as a hilarious educational video in the prologue informs us, if a cow is not milked for 24 hours, the udder will expand to point where the cow will explode like an atomic bomb. With the clock ticking and his livelihood at stake, the old man and his grandchildren jump in the tractor and hit the road desperate to find the cow. And they’ll want to get there before the old milker, a wheelchair-bound, chainsaw-wielding psychopath who was victim to an exploding udder (he is quite literally more milk than man now) who teams up with some reluctant out of work sawmillers to track down the humble heifer and prevent the ‘Lactopocalypse’.

The Old Man Movie is the perfect combination of the fast-paced, hyper-frantic, slapstick energy of the Belgian stop-motion series and film, A Town Called Panic and the sheer crass, crude and downright silly sense of humor and cartoonishly over-the-top violence of Adult Swim shows like Robot Chicken and Rick and Morty. In a film chock full of low-brow laughs, the humor works best when it’s a perfect balance of vulgarity and pure, unexpected zaniness.

Gags about millennial hipsters at a forest festival and a horny tree god become over-labored and stale and lean much more towards the crude side. Whereas the strongest comic set pieces are just so outlandish and bizarre but also contain the ridiculously crass humor. Scenes where one of the children left behind builds a mechanical cow to satisfy the hoard of thirsty customers or where characters must use the power of rock and roll to escape the colon of a giant bear that has just eaten them exemplifies this idea of a silly and bizarre concept coming together with immature and low-brow humor to create a truly hilarious set piece.

While firmly couched in balls-to-the-wall insanity, The Old Man Movie does manage to have a somewhat effective anti-animal abuse message and that even an old man can learn new tricks and more modern and ethical methods of milking. It is engrained in the narrative and does not feel tacked on, presenting this moral quandary much like a children’s film would. But thanks to the nonsensical and cartoonish register the film is operating on, this moral arc of The Old Man is so shockingly inverted in a fashion that is so ridiculous and hilarious in the climax, you really need to see it for yourself to believe it.

The Old Man Movie lives up to the hype and is the wild 88-minute ride of unhinged, sidesplitting stop-motion silliness it promises to be. It’s immature, it’s crass, it’s vulgar, and it’s all the better for it, with these animated antics forming what is easily one of the funniest films of 2020.

The Old Man Movie is screening online as part of Fantasia Film, running from August 20 – September 2. To view the full program and buy tickets, head to fantasiafestival.com.

Thank you for reading! What are your thoughts on The Old Man Movie? Comment down below!