Bob Ross' business deal with Annette and Walt Kowalski was certainly not a "happy accident." 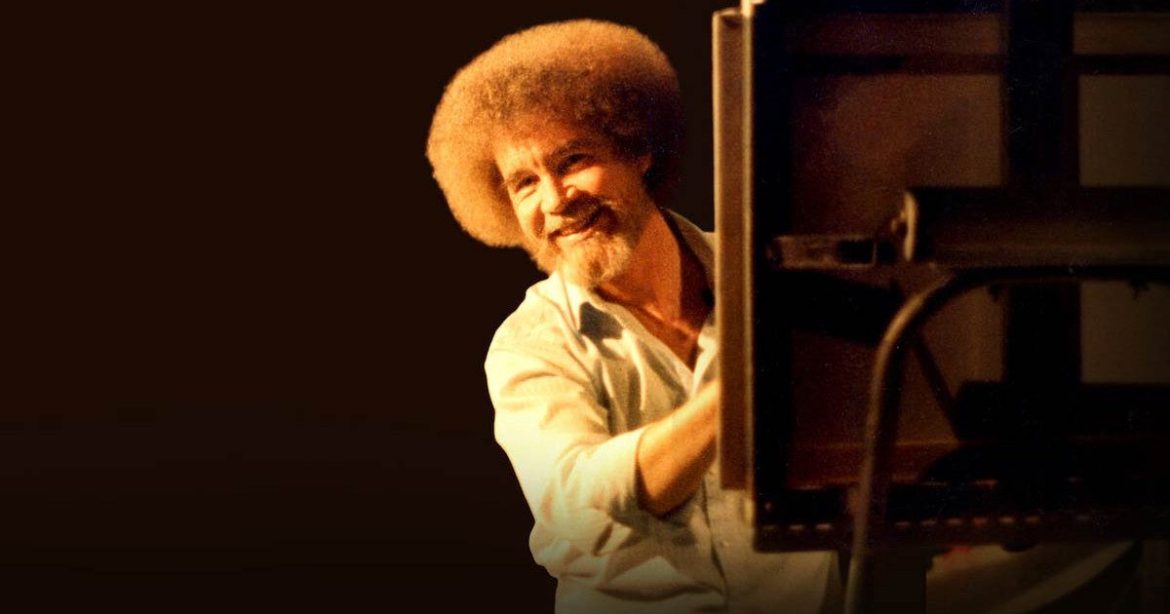 I have to admit that before I started watching this documentary, I hardly had any knowledge of Bob Ross. I am still amazed by how successful this man was: the artist who taught millions of Americans how to paint landscapes. On the other hand, he also comes across as a naive man, who understood too late what crooks his business partners were.

Bob Ross started working in the Airforce. He had an administrative function, but dreamed about painting and traveling. Later in his career, he had the opportunity to travel to Alaska, which is where his inspiration for his paintings comes from. He also took art classes. While he was working as a part-time bartender he discovered the television show by German artist, Bill Alexander. Ross started studying Alexander’s technique (the wet-on-wet technique, also called alla prima). With this technique, you first apply a white or black background to your painting, and since you don’t have to wait for this layer to dry, you can immediately continue with the rest of the painting.

Thanks to this technique, which originated in Flanders in the 15th century and was used by many famous artists, Bob Ross could finish a painting in half an hour. He started his TV show The Joy of Painting and apart from becoming a TV host, he also started working as a salesman and instructor. The phenomenon of Bob Ross was born and he became a huge success, not only in America but also in Europe. According to Ross, everybody has an inherent talent for painting and can become a painter with the necessary time and practice. Due to his unusual appearance — his infamous afro — Ross became immensely popular. During his workshops, female students tried to approach him and rip open his shirt in order to obtain some of his chest hair.

In the middle of one of these workshops, he would meet a woman who would change his future forever: Annette Kowalski. She convinced him to start his own business. Bob Ross and his wife signed a business agreement with the Kowalskis. Ross was now able to create his own art supplies. During his career, he would produce about 30,000 paintings. As he rose in popularity, the more strained his friendship with Bill Alexander became. The latter claimed that Ross had stolen his wet-on-wet technique.

If like myself, you know nothing at all about Ross, the documentary is interesting, otherwise, it tends to be quite superficial. Bob’s first wife ended up divorcing him because of his infidelity, something that’s hardly mentioned in the documentary. He even had an affair with Annette Kowalski. He remarried, but unfortunately, his second wife died of cancer in 1992. Toward the end of his own life, Bob finally understood the amount of power the Kowalskis now had over him because of the infamous business agreement they had signed. He now understood that after his death, his heritage would remain with the Kowalskis and not his own family. He tried to counteract this by marrying his nurse (he died of cancer in 1995), but to no avail. It even turned out that because of the meddling of the Kowalski’s, Bob’s own son, Steve, cannot paint.

One of the reasons why this documentary tends to be superficial is that a lot of friends and acquaintances refused to collaborate in the making of it; they were afraid the Kowaskis would sue them. And apparently, the documentary makers couldn’t find any archived images of Ross talking about himself. But all is not doom and gloom in the documentary. Bob Ross may have been a naive sex symbol, but he did have a positive impact on people. In general, Ross had a positive vision of life; it’s clear that painting made him happy and it’s this feeling he conveyed in his TV shows. He called errors that you committed while painting “happy accidents” and showed how to quickly correct them. The documentary ends with witnesses telling how Ross impacted their life. It’s a happy end for an incomplete documentary about an unusual man.

Thank you for reading! What are your thoughts on Bob Ross: Happy Accidents, Betrayal and Greed? Comment down below!

'Guillermo del Toro's Cabinet of Curiosities: The Murmuring' - A Spooky Story About Birdwatching... - MovieBabble November 9, 2022 - 10:11 am

[…] the end of the road. Throughout the previous seven episodes, we’ve dealt with evil paintings, witches, extraterrestrials, and lots of rats. What’s this final episode going to treat us […]

I never watched Bob Ross in his day, but discovered him years later on lazy Saturday afternoons, searching for television I could nap to. Historically it was golf and fishing shows where they spoke in quiet tones. I could doze on and off and open my eyes to pleasant settings and low tones. Bob Ross was amazing. I’m not sure if I want to judge his art. It’s not Van Gogh. But it was amazing what he could create in a half hour. I found it kept me awake as he tapped his brush on canvases, with a clear understanding on light, dark, color, and composition. He just pulled this stuff out of his mind. It’s just fascinating. I watched the documentary, too, and found it frustrating as well as not surprising how exploitation works. Thanks for the article.