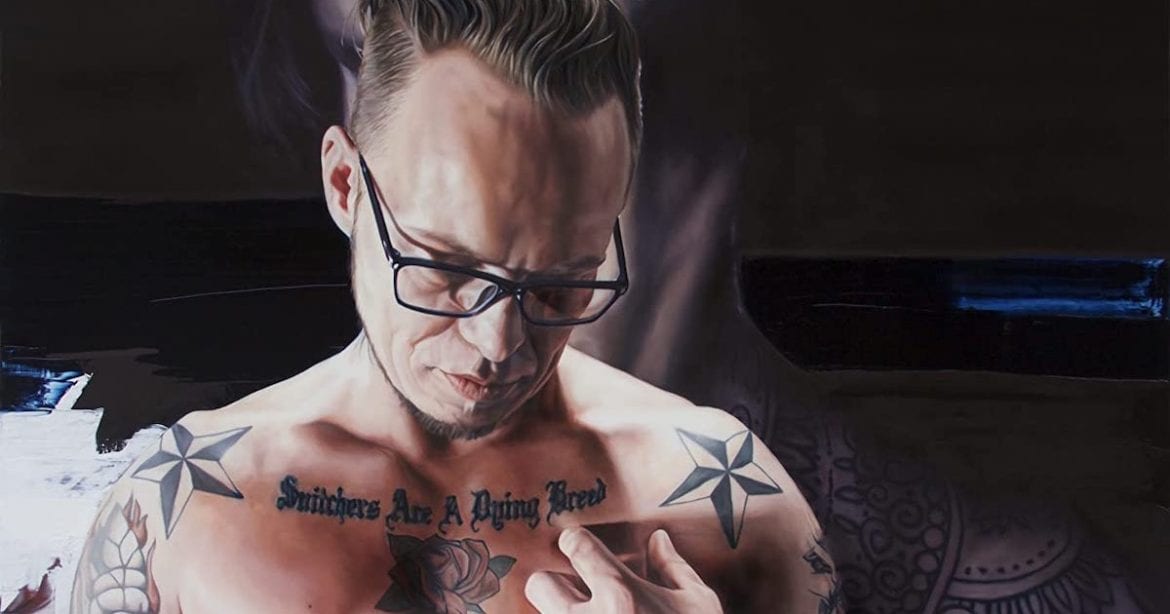 One of my deepest fascinations in film is when artists find a way to blur the line between art and reality. As I’ve said time and time again, meta readings of films are some of my favorites. I think part of my intrigue has always been that films (and art in general) can take on a greater meaning than what’s on the surface; they can be a connection to the director’s life, a representation of an actor’s public persona, or something greater. You can learn something about each person, not just the film itself. That’s why The Painter and the Thief is such an interesting documentary at its peaks. It takes the idea of art imitating life and life imitating art to another level, exploring the exceedingly curious relationship between Czech painter Barbora Kysilkova and Karl-Bertil Nordland, a street tough who nabbed her paintings from a gallery in Oslo.

Early on, The Painter and the Thief shows security camera footage of Nordland and an accomplice going about the robbery. They just walk in, take the paintings, and walk hastily to their nearest exit. This isn’t exactly the levels of thievery you’d find in an Ocean’s movie. And as Nordland later explains, he was so hopped up on all sorts of drugs he doesn’t even remember the day at all, much less where he stashed his painting afterward. But when Barbora finally sees him face-to-face at the hearing, she doesn’t feel any anger — she pities him (and so did I). Out of all the things she could say when she confronts him, Barbora asks if he would sit and be her subject for another painting. And so he does.

The most moving scene in The Painter and the Thief occurs once Barbora displays her first finished painting of Karl-Bertil to him. He can only muster a few incoherent swears before he breaks out into inconsolable tears. For once, he’s been finally seen, not as a member of the community’s underbelly, but as a human being capable of something beautiful. It’s possible that I might have tried to pass off a few stifled sniffles as coughs as he breaks down. It’s almost impossible not to feel some sort of emotion as Karl-Bertil wails. The documentary has a keen eye for the power of art; more specifically, the power of being seen in it.

Their bond grows over time with Karl-Bertil sometimes writing letters to Barbora expressing his deep appreciation for her friendship. He’s incredibly lonely, unable to latch onto much else except his vices. One can only imagine the amount of adoration he has for someone who actually views him multidimensionally. There aren’t many in the world.

As for Barbora, she isn’t doing much better. We see her get rejected from one gallery after another in the wake of the theft; she struggles with paying rent; and she too feels tremendously lonely even though she has a boyfriend. Barbora and Karl-Bertil’s relationship, while never overtly sexual, has the sort of rich emotional depth few married couples can ever muster. I don’t think even they can explain what they do for each other.

Director Benjamin Ree switches perspectives often, staying with Barbora for long stretches as she studies Karl-Bertil before switching to Karl-Bertil and getting his perspective. The Painter and the Thief becomes less about an artist impinging on her subject and more about the control or lack thereof each has at a given moment. An equal amount of studying is taking place, like a chess match without a feeling of competition.

That’s precisely when The Painter and the Thief starts to get weird. That is, before the film ends as soon as things may turn toward the freaky. An accident leaves Karl-Bertil injured, and Barbora continues to have money problems. Her art begins to take on more of a fixation with their joint suffering, simmering with the sort of subdued intensity that would really get Freud off. Barbora’s boyfriend remarks on the preoccupation in one of his minor appearances in the documentary, questioning Barbora in a way that can be summed up as, “Umm, so uhhhhhhhhhhhhhhh…what’s the deal here?”

I left the theater wondering that too when I saw the film back at Sundance in January before the world went full Capone. (You know, before it shit the bed). The film ends before we can get a conclusive understanding of what everything means. It makes The Painter and the Thief a bit of a frustrating experience overall, if still recommendable. It’s very possible not much else materialized between the two of them after the cameras were put away. After all, life doesn’t abide by the same laws as a scripted feature film.

The undeveloped second half does leave me feeling a bit empty when recollecting back on The Painter and the Thief. In retrospect, the meticulous setup of both Barbora and Karl-Bertil’s point of view seems somewhat unnecessary with the ending in mind. And by meticulous, I mean very meticulous.

Slow pacing isn’t something I normally comment on when I critique a film. I like to consider myself a very patient viewer, so I can normally get on the same wavelength as the film with limited issues and take in the film’s information at its desired pace. But considering the undesirable endpoint of the film, all that patience seems somewhat unjustified. I left without any strong conclusions.

That’s not to say Barbora and Karl-Bertil weren’t worth exploring. Quite the opposite! They’re compelling enough that I wanted The Painter and the Thief to go that extra mile. But, we’ll all have to settle for “good.” There are certainly worse things in this world at the moment, like, I don’t know, EVERYTHING ELSE.

Thank you for reading! What are your thoughts on The Painter and the Thief? Comment down below!

[…] to preview two films from the Documentary Foundation Australia Awards program strand and a documentary feature from the Europe! Voices of Women in Film […]

I was into it until I read that Freud would have gotten off on it. Screw Freud lol