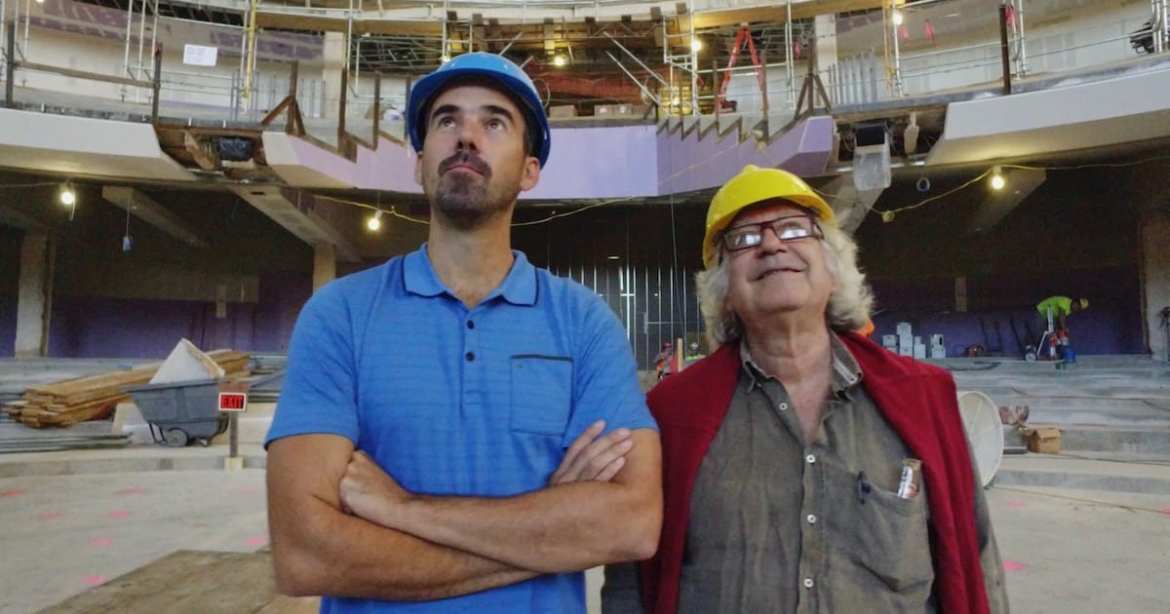 Eccentricity and innovation have always been defining features of any given artist — even more so for documentaries that specifically go out of their way to train a lens on them. Whether it be the anarchistic modus operandi of street artist Banksy in Exit Through the Gift Shop, the sly deception of fakers Elmyr de Hory and Clifford Irving in Orson Welles‘s F for Fake, or the surrealist creativity of filmmaking legend David Lynch in David Lynch: The Art Life, the primary intrigue of art documentaries almost always stems from their subjects as well as the works they create — works that transcend and often entirely redefine their respective genres and conventions.

Such is, in many ways, the case for Justin Monroe’s Holy Frit, as well as its subject, Tim Carey; a self-confident, sharp-witted, and relatively unknown LA artist, who, as he claims, was supposedly deprived of adversity by his suburban upbringing. He’s also the creative director of Judson Studios, a generations-old stained glass family business that’s also one of the most reputable — and perhaps, as we find out, only — working stained glass studios in the United States today, and a place that’s allowed Tim’s artistic talents to thrive. Unbeknownst to Tim, however, the biggest challenge of his and the Judson team’s career is just around the corner; a 4,000-square-foot stained glass window commissioned for the United Methodist Church of the Resurrection’s new megachurch installment in Kansas City, an absolutely gargantuan size that literally makes it the largest stained glass window in all of recorded history.

As a result of the technical challenges associated with creating such a daunting project, Tim enlists the help of a famous, pioneering stained glass artist named Narcissus Quagliata — who’s hailed as the “Spielberg of the glass industry” — and over the course of the two years leading up to the window’s deadline, Holy Frit documents Tim and Narcissus’s journey to finish the project. It’s an excellent, verve-packed portrayal of artistic ambition and how transformative these experiences can be; the only problem is that, for a film depicting a sprawling, sublime stained-glass window and a hyper-capitalistic megachurch, there’s some untapped potential in how it explores the more specific implications of this very same process.

It goes without saying that the centerpiece of Holy Frit is the mentor-protégé relationship that Tim and Narcissus share over the course of the film, the vast majority of which is documented by on-location footage rather than talking-head interviews. What’s most impressive about Monroe’s film, however, is just how efficiently and fully it manages to convey Tim and Narcissus’s respective personalities, enough for it to show the changes that Tim undergoes as the project continually introduces new challenges. In many respects, it’s the most well-developed facet of the story that the documentary presents — a compelling look at how one can evolve both as an artist and even as a person when tasked with creating a potentially historic work.

All throughout the film, it becomes clear that Tim is feeling the brunt of the pressures associated with the project, especially as his professional relationship with Narcissus evolves and levels out over time. For instance, he’s constantly wanting to learn Narcissus’s innovative glass-crafting techniques as soon as he possibly can to complete the project faster, a source of conflict between master and apprentice that, although real, eerily and befittingly mirrors that of several traditional mentor narratives in fiction. Add to this the fact that a window of such enormity requires Tim’s management of Judson to constantly expand its horizons in different ways, and it’s easy to see why it burns him out, exposing some of his more irritable traits. Getting all this across, of course, is no easy feat, but the film’s relatively fast-paced editing ensures that the more overwhelming aspects of this process are not lost on the audience; meanwhile, intermittent graphics show us how many of the window’s 161 panels need to be completed, and a clever usage of split-screen offers some nods to the partitioned imagery of stained-glass panels while displaying a plethora of information at once.

As Narcissus claims in one of his monologues about the window’s potential influence on the art form, however, “if it’s mediocre, the entire f-cking business goes down in two years,” and in the process of trying to live up to this weight, Tim undergoes numerous moments of revelation in Holy Frit that Monroe puts together so compellingly to a point where the film’s narrative almost seems brilliantly scripted. There’s a shockingly clear arc Tim undergoes from a somewhat pushy, self-centered, traditionalist stained glass artist to a significantly more mature, independent, and capable impressionist that must be seen to be believed, and Monroe’s primary achievement with Holy Frit is how he captures all the key moments of Tim both with and without Narcissus to paint a full picture of the influence that this revelatory, once-in-a-lifetime project and mentorship has on his professional and personal life.

The Megachurch-Sized Elephant in the Room

It’s a bit unfortunate, therefore, that despite Holy Frit‘s deeply compelling narrative about artistic transformation, the same attention to detail couldn’t be offered in full to the other implications of this project, perhaps at the risk of stretching out the film’s already two-hour-long runtime. (Could a miniseries version of this project been more fulfilling? Perhaps, but hypotheticals are dangerous games to play.) For instance, there’s a rather interesting conflict here regarding the intersection of art, religion, and commerce that’s worth digging into; after all, when a window portraying various key religious and historical figures of great altruism finds its way into an impossibly opulent and enormous megachurch, it creates a genuine clashing of values that no amount of explaining from head pastor Adam Hamilton can ever fully alleviate or simplify. The problem is that the only snippets of acknowledgment you might find here are a few interviews with local Kansas City residents that seem hesitant, if not somewhat critical, of the cost demanded of the Church’s new building, as well as a handful of dissatisfied remarks from Tim and Narcissus — which may be disappointing to some given the wide-reaching breadth of debate that the topic at hand invites.

In the face of what the rest of Holy Frit entails, however, its primary narrative about artistic growth, maturity, and ambition is engrossing enough for most audiences to be fully satisfied with the final product — even if there’s something missing in how the film delves into greater conversations about the megachurch-sized elephant in the room, it’s sufficient enough at portraying Tim and Narcissus’s winding, twist-laden journey for it to be partially absolvable. Documentaries that cleverly re-articulate the adage of “it’s the journey that matters, not the destination” are not very easy to come across, especially not documentaries about the largest anything of a given artistic medium, but even for some of its flaws and shortcomings, Holy Frit may prove to be a divinely rewarding experience for those willing to heed its tale of self-improvement and possibly even transcendence through art.

For more information on Holy Frit and other films playing at the Melbourne Documentary Film Festival, check out their website.

Thank you for reading! What are your thoughts on Holy Frit? Comment down below!

A Great Becoming: ‘In the Mouth of Madness‘...