‘Guillermo del Toro’s Cabinet of Curiosities: The Murmuring’ – A Spooky Story About Birdwatching…

The season ends on a strong, emotional note. 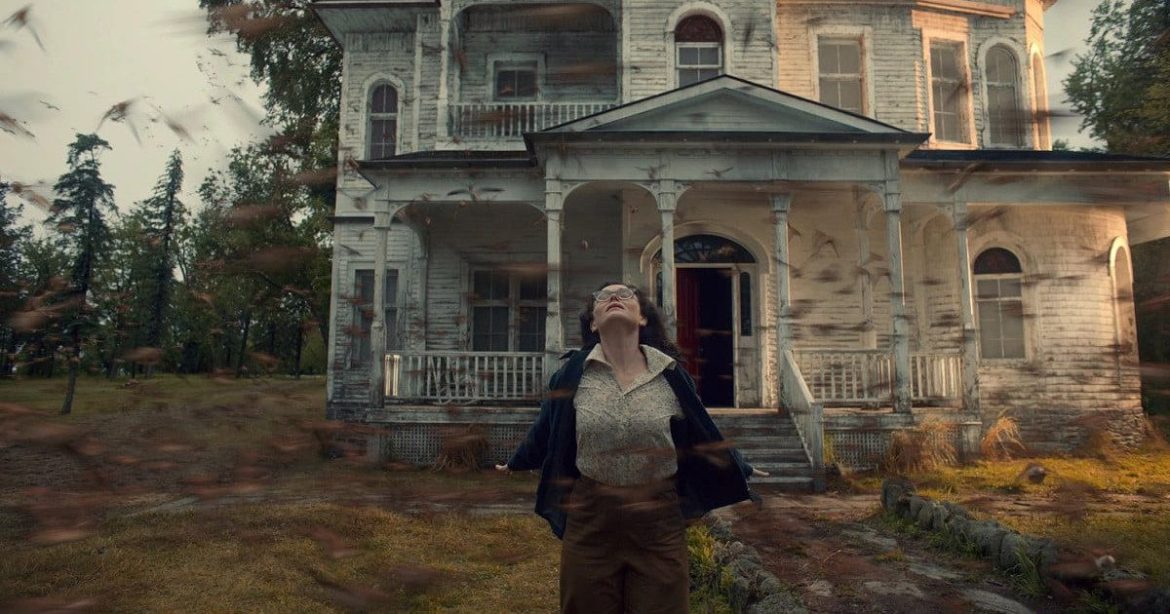 It’s the end of the road. Throughout the previous seven episodes, we’ve dealt with evil paintings, witches, extraterrestrials, and lots of rats. What’s this final episode going to treat us with?

The answer: birds. No, we’re not getting a remake of Alfred Hitchcock’s The Birds. The birds, in this case, are not malevolent. Don’t expect to see someone’s eyes being pecked out. The terror in this particular story lies with the mind, on those things we are too scared to confront.

A married couple of ornithologists, Nancy (Essie Davis) and Edgar (Andrew Lincoln), travel to a remote island to research the murmurations of the Dunlin bird species. When they arrive at the island, expected to reside in tents, a friendly caretaker, Mr. Grieves (Greg Ellwand), has prepared a house for them to stay in. This house has been long abandoned, and inside still lay the many remnants of the previous tenants.

The reason for this trip isn’t just for the sake of academics, but also in the hopes of saving their marriage, which has been damaged immeasurably after they both lost their daughter, Ava. Edgar is trying his best to reach out to Nancy and to rekindle their love affair, but she rejects all his advances.

Studying the birds, they notice they are showing unusual patterns and this is accompanied by supernatural phenomena inside the house that only Nancy seems to experience. While Edgar rationalizes everything, thinking that Nancy is perhaps imagining things as a result of her suppressed grief, Nancy believes there’s a deeper meaning to all that’s happening.

It’s not surprising that this would turn out to be another standout episode this season, as we have Jennifer Kent as guest director. Her 2014 debut feature, The Babadook, is already a classic of the horror genre, and this episode even reunites her with The Babadook‘s main star, Essie Davis.

Thematically, The Murmuring has a lot in common with Kent’s debut film. Both stories explore grief, and the need to confront it. Both are allegorical tales, though The Murmuring is more straightforward and less surreal — so, unfortunately, don’t expect any wonderfully strange stop-motion effects.

It’s an entirely different affair than the previous episodes. There are no monsters. No gore. It’s essentially a slow-paced relationship drama with horror elements. This might even be suitable for younger audiences, though they will probably be extremely bored.

If there’s any flaw, it might lie in its conventionality. The concept of grief-stricken people staying in a haunted house is something we’ve seen time and time again. Some of the scenes seem to echo 1980’s The Changeling just a little too much.

But its power lies with its execution. It’s easy to imagine this in the hands of a lesser director, and see this transform into another Conjuring-esque, generic haunted-house spectacle, filled with cheap jump scares and over-the-top pyrotechnics.
Instead, there’s remarkable restraint. You will have to be patient before the next spooky set piece. But don’t worry, Kent makes sure that every scare hits the right note.

What’s more, Kent knows that the most important aspect of the story is the main character’s psychological journey, and giving her pathos the ending she deserves. Rather than bulking up the story with unnecessary twists and turns, or cheap thrills, we end on a moving note, that will leave you undoubtedly satisfied.

It also helps that Essie Davis gives another great performance, one that deserves to be remembered as one of the greats in female-driven horror films.

And that’s the end of the season, and perhaps the show. While reviewing the last episode, I realized I will miss it; from its ominous opening tune to seeing del Toro coming out of the darkness, introducing us to the next story. I hope he will come back next year, and I hope other new and burgeoning voices of the horror genre will helm new episodes — though David Prior, Panos Cosmatos, and Kent are more than welcome to return. I hope these imagined episodes will continue giving every director the creative freedom they are often deprived of in their market.

Even if the bulk of the episodes were flawed, it was a great ride nonetheless. And it sure made this Halloween just a little more special.

Thank you for reading! What are your thoughts on The Murmuring? Comment down below!

Personal rankings –
1- The Autopsy. Tight, scary, great lead.
2- The Murmuring. Simple but so well done.
3- The Outside. Creepy and weird. Just what I’m looking for.
4- The Viewing. Batshit in a fun way.
5- Pickman’s Model. Solely for whatever the fuck Crispin Glover was doing.
6- Graveyard Rats. I’m with Indy’s dad on rats In enclosed spaces
7- Lot 36. It was fine, I guess.
8 – The Rupert Grint one. It had Rupert Grint in.