Abi Damaris Corbin's Sundance award-winner is a tense thriller, and a broad critique of an American injustice. 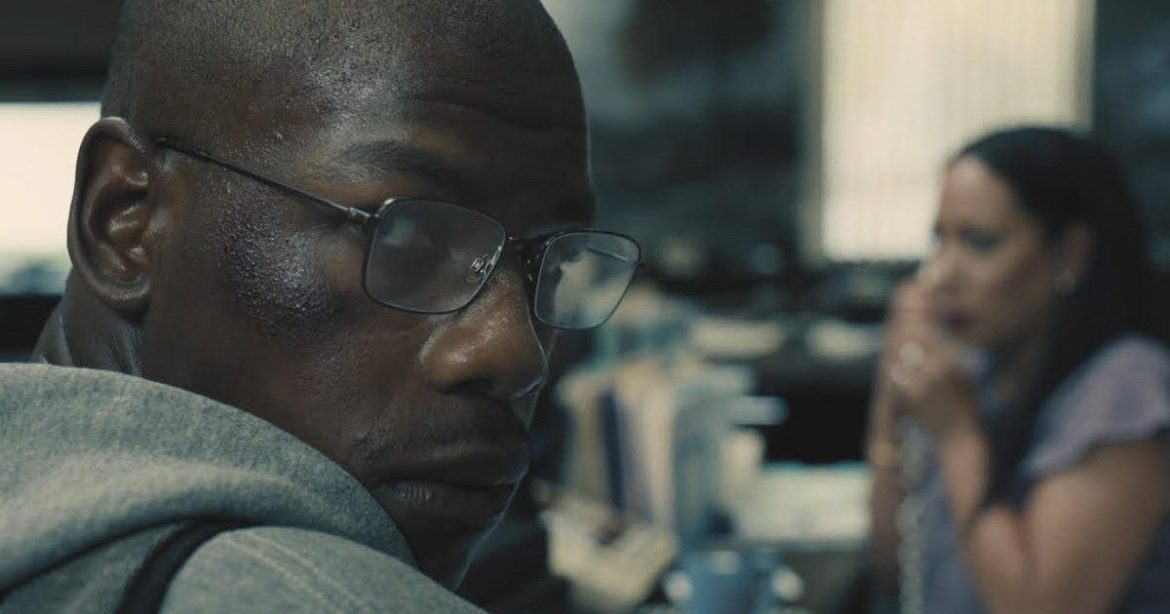 There’s a scene towards the middle of Abi Damaris Corbin’s Breaking (originally titled 892 at its Sundance 2022 premiere) in which former Marine Lance Corporal Brian Brown-Easley (played by John Boyega), after being withheld from his disability check for reasons he tries in vain to grasp, steps out of a Veterans Affairs staffer’s office, and the camera slowly pans to look at the countless other veterans and family members standing in line. They’re evidently all waiting for support that they’re also desperate to receive, yet their slouched postures, demoralized expressions, and general air of exhaustion make it clear that far too many of them will likely face the same hardships as him in getting that financial support to begin with. It’s a silent shot that packs in as many people as it can into its wider aspect ratio, and expresses a world of suffering in and of itself as Easley passes through them to leave the building, bluntly depicting one of the United States’s most horrific hypocrisies — how it abandons, neglects, and abuses so many of the people it sends off into wars that brutalize them mentally and physically if they ever make it back home.

Breaking is an adaptation of the real-life events that transpired on July 7th, 2017, in which Easley, faced with the possibility of homelessness after failing to find an explanation for the absence of his disability check, walked into a Wells Fargo bank in Atlanta and held two of its employees hostage by threatening to detonate a bomb if his demands were not met. Over the ensuing hours, Easley called the police and local news stations in search of a way to get Veterans Affairs to pay him back the $892 owed in his disability check and publicize the injustices committed against him. Driven by powerful performances from John Boyega and the late Michael K. Williams in his final film role, Corbin’s film works hard to depict the experiences of a man whose main plea was to have his story told to a country that failed him — and Corbin phrases this through a The Guilty-styled thriller with limited locations in service of focusing on its characters, a narrative approach that works relatively well for its ideas, albeit only on a somewhat broader surface level.

While Breaking‘s most direct source of inspiration is Aaron Gell’s Task and Purpose article titled “They Didn’t Have to Kill Him,” the film largely exchanges said article’s thorough profiling of Easley’s past leading up to his actions on July 7th for a story that predominantly focuses on what occurred in the moment on that specific day. To that extent, the background information the audience receives on Easley as a person is largely reserved to how he talks with his family, the way he calmly treats the two employees at the bank, and the details about his life that he divulges to the people he calls in the middle of the hostage situation. We’re able to glean that he maintains a close relationship with his daughter, Kiah (London Covington), and slightly less so with his ex-wife, Cassandra (Olivia Washington) — the former of whom becomes a reliable mental anchor of sorts for Easley throughout the events of the film — even if the glimpses we get of them together are few and far between, as Easley is seen early on having to fend for himself alone in his incredibly small apartment.

Corbin’s airtight reconstruction of the hours spent inside that Wells Fargo — held together by slick cinematography from Doug Emmett (Sorry to Bother You), sound design from Peter Bawiec, and music from Michael Abels (Jordan Peele’s frequent collaborator) — helps to show off the acting talent that makes up much of what makes the thriller elements of Breaking tick. For one, Easley’s interactions with the bank’s employees — Estel Valerie (Nicole Beharie) and Rosa Diaz (Selenis Levya) — are marked by the fear the latter two face in the moment even as Easley approaches them calmly, and the ways they try to go about understanding the man keeping them inside so they can find a way out. Beharie in particular is a highlight, portraying Valerie as the somewhat calmer employee who has experience with working her way through a bank robbery, but finds herself also succumbing to desperation while genuinely empathizing with Easley to resolve his situation as the gravity behind his demands only grows clearer. The tension between Easley and the employees also, inevitably, ends up extending to the way he talks with the negotiator on the scene, Eli Bernard. Played effortlessly by a steely and sorely missed Michael K. Williams, Bernard’s authoritative demeanor towards his fellow officers often overlaps with the sympathy he expresses towards Easley: an effective portrayal of a determined negotiator who refuses to back down, not just because of a need to free the hostages, but also out of an earnest desire to maintain Easley’s dignity as someone callously abandoned by Veteran Affairs.

It comes as no surprise that John Boyega stands out as the center of this film, fluctuating between anxious paranoia, indignant rage, and apologetic shame seamlessly with every single phone call and conversation he goes through — a constantly heightened emotional state that amplifies the tension behind every single moment of his holdup, and powerfully conveys the desperation, trauma, and helplessness motivating Easley’s sudden and haphazard actions. It’s an indisputable feat, and it’s evidently clear how much effort Boyega invests into giving Easley the depth and humanity needed even within such a restricted narrative framework, making for an incredibly galvanizing, detailed performance that strongly demonstrates his continued improvement as an actor. The only thing about Breaking that limits him, however, is that such a specifically crafted, perhaps even claustrophobic narrative framework can only do so much to convey the totality of Easley’s experiences, and in turn, can only give so much room for Boyega to really flex the absolute fullest extent of his range as an actor.

Where Breaking mainly falters is that its limited scope and sparse use of flashbacks runs somewhat counterintuitive to the film’s mission of telling Easley’s story — a point that Boyega’s portrayal of him near-constantly reiterates over the course of the film, whether it be through how much he discloses to local news in a phone call or the demands he makes to Bernard, and perhaps even more prominently than his desire to reclaim the money he’s owed by Veteran Affairs. When the film sets almost all of its runtime within the confines of inside the Wells Fargo and its immediate surroundings outside, with only a handful of brief insights into Easley’s service, his personal life, and his conflicts with Veteran Affairs (aspects of his life that are covered in relatively greater detail in the original Task and Purpose article), how much of Easley’s story is actually being told outside of the singular moment that ended up defining him in the eyes of the many — largely because of how suddenly his story was actually cut short? And how much, by extension, are we actually able to see the racial and systemic injustices committed against him and countless other people like him?

It’s a question worth asking — even despite the fact that Breaking works as a solid, tightly-knit thriller depicting the tangible consequences of these injustices — because ultimately, it never quite gives us the fullest portrait of Easley as a person, and in turn prevents us from seeing the film’s exploration of its themes go anywhere beyond the surface level. There’s no doubt whatsoever that what we have with Breaking as it is right now is an incredibly sturdy and well-crafted film, both in terms of technical craft and the incredible cast at hand, and it’s a formidably tense thriller experience of great emotional potency. It’s just that for a film whose entire raison d’être is getting more people to know about Easley’s story — and in turn, the extent of just how grotesquely the United States leaves its veterans behind — a tense thriller experience can only end up doing so much.

Thank you for reading! What are your thoughts on Breaking? Comment down below!