‘Rocky IV: Rocky vs. Drago’: Stallone’s New Director’s Cut Is Not the Superior Version, but Makes for an Interesting Companion Piece 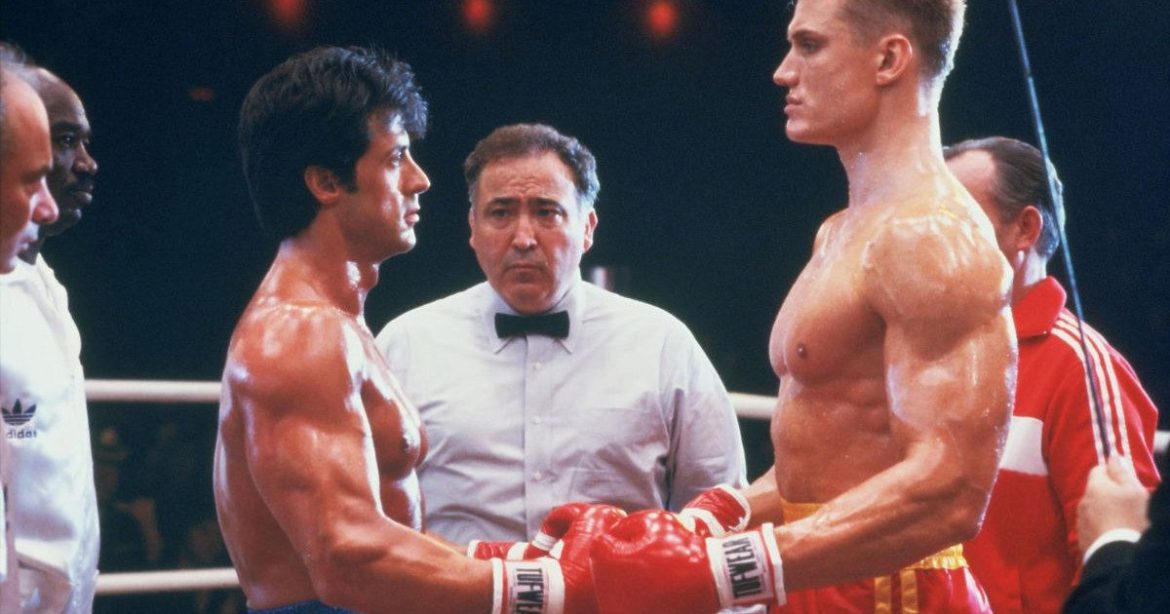 If you want to see how far a movie franchise can change in tone, watch the original Rocky and then its third sequel, Rocky IV. You can see the evolution (or devolution, if you prefer) from seventies to eighties cinema.

Concurrently, it’s also a cinematic presentation of the state of mind of its central movie star, Sylvester Stallone. Watch Sly’s humble beginnings writing and starring in the 1976’s original, a low-budget seventies drama about a humble southpaw boxer proving his mettle against a heavyweight champion. Rocky is a story about endurance, of standing your ground against the dark forces of life and not letting them take you down.

As many have said before, each film in the Rocky franchise is an indication of where Stallone’s mind was at that point in his career. In the original Rocky, he was the underdog. In Rocky II, the character, similar to Stallone himself, was struggling with fame. By Rocky IV, he was at the height of his popularity and thus, the film naturally reflected the grandiosity of his ego.

Yet, despite this, I think Stallone always did take proper care of the character. Note that even in Rocky IV, even with him living a far different world, Rocky’s character remains the same. He’s still the same lovable, simple-minded character he was in the beginning. But stylistically, Rocky IV is almost the exact opposite. The seventies grit has now been replaced with eighties galore.

That doesn’t mean I don’t like it. On the contrary, I adore Rocky IV, though in a different way. It’s the same way I love the original Child’s Play and adore the comedic Seed of Chucky. Both feature the same main character yet pulled into a different type of film.

When it was announced that Stallone was working on a recut of Rocky IV, I wasn’t too excited about it. For me, it wasn’t necessary. I also worried Stallone wanted to change the identity of the film, trying to modify the tone by making it closer to the original.

The problem with that, is that Rocky IV was never meant to resemble the original film. The heart of the film belongs to eighties celluloid. Trying to change the heart of a film through editing is a tricky thing. You could ruin what worked in the first place.

Thankfully, Stallone’s new director’s cut has a consistent tone throughout. It’s not a drastic change, but a significant one. The film still isn’t afraid to dabble in the occasional eighties silliness. One of the biggest excisions was the peculiar little subplot of Paulie’s budding romance with a robot called Sico.

Personally, I never had a problem with this subplot. It’s completely bonkers sure, but it made me laugh. Perhaps it’s because I have a giant soft spot for the character of Paulie and actor Burt Young in general.

From the opening scene alone, you can feel a tonal change. Instead of seeing two gigantic boxing gloves (one dressed in American stars and stripes, the other with the Hammer and Sickle, since this film came out during the Cold War, just when there was a sharp increase of tensions), touching and then exploding (because this was the eighties, after all), we are treated to a somber flashback scene between Rocky and Apollo Creed. This already indicates one important change: Stallone wants to dilute the American exceptionalism of the original, and have this film focus more on Rocky’s friendship with Apollo.

Despite the running time being mostly the same, the film does feel like it has a more leisurely pace. Additional scenes, some just slight continuations of original scenes, are mostly character-based. Some of the character’s journeys, their meanings, change in the process.

Apollo Creed’s downfall, originally the consequence of his arrogance, now receives some added nobility. There’s that terrifying moment just before the fight when Apollo realizes that he might have underestimated Drago’s skill. Yet, there’s the sense that Apollo, similar to Rocky in his final film, Rocky Balboa, wants to honor the life he’s chosen. Similar to what Drago would say after the fight, “if he dies, he dies.” To live and die like a warrior. It’s not just about having another chance at the spotlight or about reliving some of his former glory, it’s about going down like a fighter and not fading away into old age.

Perhaps Stallone originally excised it to make a political point. To show the importance of Americans not being arrogant and thinking they can easily beat down the Russians — similar to how Col. Trautman in Rambo III warned his Kremlin opposition not to underestimate the Mujahideen people, so as not to repeat the same mistake the Americans made in their conflict with the Vietcong.

The most heartfelt addition comes with a little snippet of dialogue, where Rocky, seeing that Apollo is at the end of his ropes, pleads with him to stop the fight, “don’t do this to me.” Apollo tells him to not throw in the towel, no matter what happens. Rocky’s respectful adherence to Apollo’s wishes just adds more fuel to the tragedy.

Tony Burton who plays trainer Duke, also gets to shine performing a wonderful eulogy at Apollo’s funeral. It’s baffling why this scene was cut in the first place, especially since Burton does such an exceptional job. It’s further topped off by a tearful goodbye from Rocky himself.

While I wouldn’t agree that this is the better version, I do think the film certainly improved on basically anything to do with Apollo Creed’s character.

When it comes to Drago’s character, we only receive minor new additions. Yet, they are important ones. We have a scene focusing on a bemused Drago, as he’s lifted upwards on a stage, to face off against Apollo. Witnessing America’s flair for showmanship, the hundreds of people cheering and hollering, hearing James Brown singing ‘Living in America’, all the while Apollo dances in a stars-and-stripes clad robe and top hat, you can see, just by a look in his eyes, that he’s overwhelmed. He’s a stranger in a strange land. He’s in a different world here. A world filled with people who don’t appreciate the luxury of their position.

But the film doesn’t really fundamentally change Drago’s character arc. His proclamation that he’s fighting only for himself, which was in the original version, already said everything about the character. He just wants to be a great athlete and must abide by the wishes of his government, follow through with their demands just to prove himself. A most telling moment is when Drago sees himself draped in a poster where he’s portrayed as some sort of symbol for Soviet supremacy. You can see that he’s not interested in that. He just wants to be a great fighter, but unfortunately, has to sell his soul to gain the opportunity to actually flourish in the boxing ring.

Rocky IV is probably the best performance of Lundgren’s early acting career. Despite his immense screen presence, he was often stiff in front of the camera — though now he basically steals the show from everyone in The Expendables. Yet I feel that Stallone did work to his sensibilities.

There are more changes throughout, a prolonged plea from Adrian to not fight Drago, some changes made in the editing during fights. The original was notorious for being filled with montages. This is still true here. But one montage sequence, involving Rocky’s solemn drive through the night, is now infused with black and white flashbacks instead.

Don’t worry however, all the sweaty, grunting, muscle-obsessed training montages remain intact. You can’t have Rocky IV without them.

Stallone’s ex-wife Brigitte Nielsen’s role has been noticeably diminished — not something I necessarily had a problem with. There’s a new short inclusion of an inner monologue by Rocky, when he first gets knocked down by Drago. He’s prompting himself to get up and fight. Personally, I thought this was a little unnecessary. Rocky’s resolve, by the end anyway, should be portrayed physically, not verbally.

The climatic concussion-inspired speech about “everybody can change” now begins with an ode to Apollo. Yet the final song, Hearts on Fire, is replaced by the classic “Eye of the Tiger”. Another ode to Rocky III, where Rocky’s friendship with Apollo flourished. This new version almost feels like an apology to Apollo’s character.

Overall, it’s not an entirely different film. The feeling is different but at its heart, it’s still Rocky’s fourth outing. This version now received the sensibility of an older, more refined Stallone. It’s not necessarily the superior version, or the ultimate version that should permanently replace the original cut, but it’s a nice addition to the franchise.

And certainly, without a doubt, a must-see for fans — though, for my money, I still prefer more Paulie (robot love story included).

Thank you for reading! What are your thoughts on Rocky IV: Rocky vs. Drago? Comment down below!

An Unnecessarily Deep Dive Into ‘Predators’