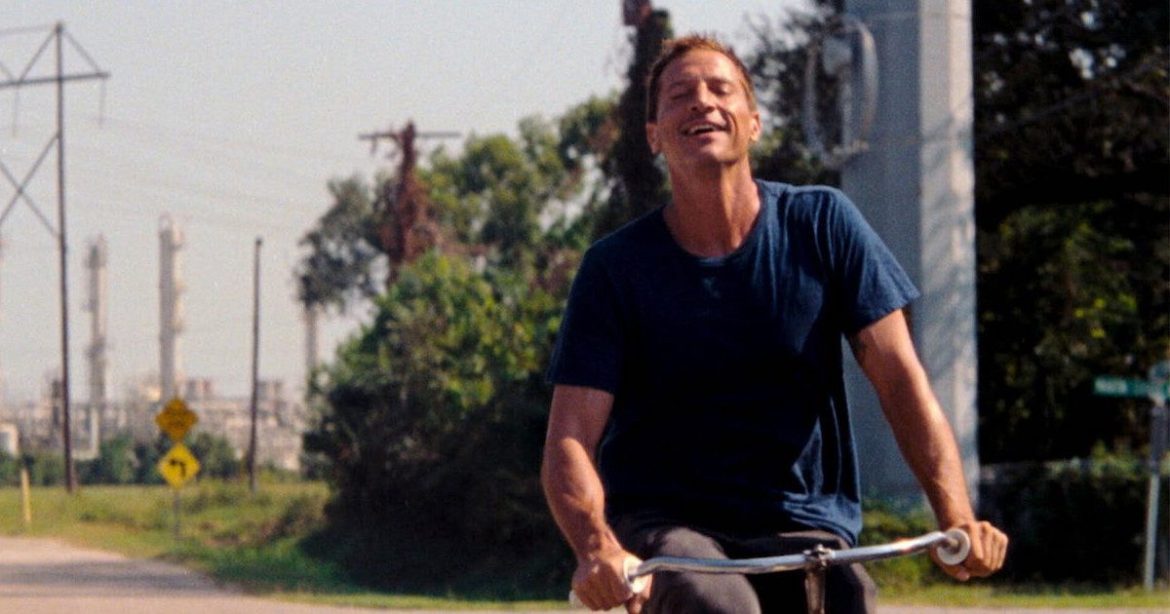 Every once and a while, a filmmaker comes along to flip the script and tackle themes and ideas that most are afraid to touch. Sean Baker has done this his entire career, but especially with his past two movies, Tangerine and The Florida Project, by taking a look into the lives of the lower-class Americans and the troubles they go through just to get by. Baker has done this yet again with his latest film Red Rocket, which follows ex-pornstar Mikey Saber (Simon Rex) as he returns to his small Texas hometown where he reunites with his estranged wife Lexi (Bree Elrod), her mother Lil (Brenda Deiss), and meets 17-year old Strawberry (Suzanna Son) at the local donut shop.

Introducing sun-kissed Texas to the footage of Mikey Saber on a cheap bus trip while NSYNC’s “Bye Bye Bye” fills your ears with 2000s nostalgia is Sean Baker’s way of telling the audience to buckle up and prepare themselves, because what follows is a film that is sure to polarize moviegoers. Mikey is a washed-up pornstar who returns to Texas where he is not all that welcome after a litany of selfish things he supposedly did in the past (what he did you’ll never know, but you can only guess based on the behavior you do see); right from the get-go, Simon Rex’s performance immediately shines.

With the perfect level of charm, Rex lures viewers in with a sense of sincerity and brings an almost unnerving level of humanity. Immediately, one questions just how bad of a person Mikey is and why he isn’t wanted back home. As Red Rocket progresses, however, the audience is introduced to Strawberry, portrayed by Suzanna Son in a debut performance; and once Strawberry and Mikey meet, the film reveals its true intentions.

Baker has crafted a sort of parody of the American dream with Red Rocket as the film follows the journey of Mikey’s relationship with Strawberry, all the while staying true to itself as a story about an entirely self-unaware and eccentric person who will do anything to get what he wants out of life. The film tackles the sexual relationship between Mikey and Strawberry as he tries to coax her into joining him back in LA to be “the next big thing” in his line of work.

While this is definitely a taboo subject and one that may unsettle audiences, Baker and co-writer Chris Bergoch tackle the story in such a genuine way that the film never feels like it is glorifying or condoning any of Mikey’s behaviors. Rex’s brilliant performance brings such charm to his character that initially draws viewers in, but that charm quickly reveals itself as a facade — Mikey is clearly irredeemable on all counts. As well as Rex, Son also gives a great debut performance as Strawberry who is seemingly oblivious to Mikey’s intentions yet also seems to be playing her own games throughout, which leads to an interesting dynamic between their characters.

Baker’s direction is also a big stand-out. Not only does he get some terrific performances out of his cast, but his visual flair adds a somewhat gritty, textured feel. Cinematographer Drew Daniels also brings some stunning visuals aided by the use of 16mm film, with many shots having the feel of being bathed in the sweltering Texas heat. All of the little decisions that Baker and Co. make behind the camera are what make Red Rocket feel grounded and stop it from becoming an unnecessary tale.

The subject matter will turn people off, but it’s a story that serves a purpose in shedding a light on the hustle of the lower class, and the circumstances that create such egotistical, monstrous characters. It is a film that will make most cringe and will challenge most moviegoers to make their own character judgments, but it is a film that you won’t soon forget. Filled with great performances, a clever screenplay, and top-notch direction, Red Rocket is definitely one to check out if you are willing.

Thank you for reading! What are your thoughts on Red Rocket? Comment down below!