‘Fantastic Beasts: The Secrets of Dumbledore’ Should Save This Franchise

The third 'Fantastic Beasts' film is a satisfying course correction. 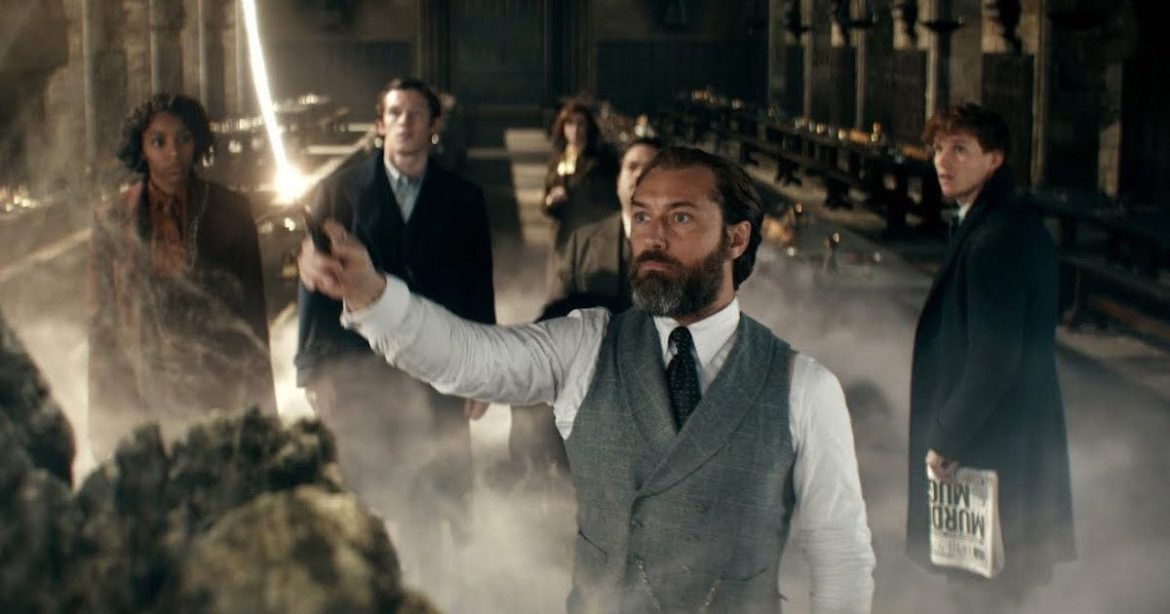 The Secrets of Dumbledore never really stood a chance, did it? A tepid critical response to the first two films and controversy after controversy, left the once-promising “Wizarding World” fumbling its bag. It’s been nearly four years since The Crimes of Grindelwald, the second of (reportedly) five in the Fantastic Beasts series. In those four years, it’s hard to find a franchise that has lost more steam than this one. Johnny Depp, who was starring as Grindelwald, one of the most important characters in all the Wizarding World, has been recast. Ezra Miller continues to get into trouble, including a most recent incredibly ill-timed arrest. Even the Wizarding World creator and Fantastic Beasts screenwriter, J.K. Rowling, is mired in controversy that has brought many fans to quit Harry Potter, not to mention its less popular spin-off. How exactly could we honestly say that the third installment of this five-film series didn’t arrive D.O.A.?

Even as a massive Harry Potter fan, I can’t deny my decreasing enthusiasm. Controversies aside, which is a weighty statement and harder for others to do, the Fantastic Beasts series isn’t off to a great start. While the first two are enjoyable, more to die-hard fans than the general public, both are quite messy. The foundations of these spinoffs contain some puzzling decisions that have handicapped the series. However, in the face of certain failure, director David Yates (who also directed the previous installments) has done the improbable. The Secrets of Dumbledore isn’t merely a step up in the franchise, it is a good film. Even more surprising, it provides legitimate reasons for the series to continue.

There is no real doubt about J.K. Rowling’s talent as a world builder. She’s created one of the fullest, most actualized, and interesting fictional worlds ever. With brilliant storytelling and character development, she made Harry Potter one of the most beloved stories of all time. As a screenwriter, however, the transition hasn’t been all that smooth. Fantastic Beasts and Where to Find Them, the first film where she gets a writing credit (and the sole one at that), is a bit of a mess. It feels like multiple movies mashed together, with too many characters and plots. Crimes of Grindelwald is a better effort, with a slightly more focused story, but still feels crowded with needless details and characters. Secrets of Dumbledore is by far her best outing yet. Co-written for the first time in the series with Harry Potter film adapter, Steve Kloves, there is a clear direction here.

The Secrets of Dumbledore sees a clear shift in tone. This third installment is much more whimsical and fun, but also in focus. As the title suggests, Jude Law’s Dumbledore is center stage as this film’s actual protagonist. His relationship with Grindelwald (now played by Mads Mikkelsen), and his attempt to stop him is the film’s focus. This pushes Newt Scamander (Eddie Redmayne) to the side, which is a much better place for him. While still a bit long, this is a film with a purpose. More confidently written and driving forward with momentum to a compelling final act. It is still held back by sins of the past, mainly Ezra Miller’s Credence, a character and plot that continues to not work and slows the story down. However, the Dumbledore and Grindelwald relationship is the more compelling story that keeps everything moving forward.

Dumbledore Is the Secret

I love Eddie Redmayne’s Newt Scamander. It’s an awkwardly charming character that is endearing and easy to follow. Not dissimilar to the other original characters, Queenie, Jacob, and Tina. All are great and their interconnecting stories and romances are interesting. However, they struggle to carry the weight of this franchise, as the central piece. Especially when a character as big as Albus Dumbledore and one of the most impactful stories in the Wizarding World are also present. While those first films struggle to figure this out, it’s The Secrets of Dumbledore that actualizes what we’ve all known for quite some time. The story that is worth a sprawling five-film exploration is Dumbledore and Grindelwald.

Jude Law is incredible as Dumbledore, treading the soft balance of childlike whimsy with astute regality. He both commands respect and admiration, while appearing with relatable aloofness. Law crackles on screen and ultimately takes up all the air in the room, which makes him the person to follow. Book readers will know of his past with Grindelwald and there is so much mystery in that story. So the title alone elicits excitement, but it is the stillness of Mads Mikkelsen who brings the character to life beautifully. Johnny Depp’s turn as Grindelwald was interesting, and one I liked, but Mikkelsen brings something much different. He’s charming, intelligent, intimidating, and commanding. He strikes fear with ease and has confidence that makes him just as compelling as Dumbledore.

Their shared story of love and lost love is unlike anything in the Wizarding World. From their differences on muggle relations, to how they gather followers, The Secrets of Dumbledore fully starts to explore this relationship. This is a story that deserves full exploration. Peeling back the layers on this relationship is saving this franchise and if given the chance, will allow it to truly soar.

Starting to Recapture the Magic

The most disappointing thing about the Fantastic Beasts franchise isn’t a messy story, its characters, or an overcrowded plot. It’s more simple than that, they didn’t feel like Harry Potter movies. Comparing the franchises is a bit of a fool’s errand, but there is a distinct feeling to the Harry Potter movies that is needed to bring the Wizarding World to life. The Wizarding World is brilliant in part because of its sprawling characters, thoughtful world, and engaging stories. But it’s what that world makes us feel that is the key to what makes it so special. That has been missing in the first films in the franchise and with Secrets of Dumbledore that feeling is starting to come back.

It’s hard to quantify a feeling but, at the risk of sounding simple, this feeling is essential to The Secrets of Dumbledore working. Harry Potter is inspiring. It’s a world that honors friendship and love. It’s a representation of the importance of who we are as people. We can fall into this world and be different, be weird, and find a place because above all it’s who you are on the inside. That is the feeling that fuels this enchanting world that so many people love. For the first time in this series, The Secrets of Dumbledore captures that, through its change in tone and focus on the world’s most enchanting character.

While Dumbledore continues to brighten up the world, the tonal shift lies throughout the entire cast of characters. Newt’s adventures with his brother Theseus (Callum Turner) are charming and fun. Queenie and Jacob’s (Alison Sudol and Dan Fogler) romance is as sweet as ever, and a beguiling performance from Jessica Williams as Lally Hicks lifts this movie out of the over-serious trap this franchise has been trapped in.

We Should Give It A Chance

I understand the complicated feelings anyone would have in reference to the Wizarding World as a whole and this film in particular. If J.K. Rowling’s comments and/or Ezra Miller’s behavior are a deterrent, then by all means stay away. However, if you are simply a fan of movies, blockbusters, or the Wizarding World, then The Secrets of Dumbledore is very much something worth your time. It’s charming, sweet, and earnest in a familiar way for fans of this world. Even with the first two films being a mixed bag, this is fun enough to win you over.

Most importantly, it is good enough to warrant the continuation of this story. This film steadies the ship of a once-promising franchise and its central story provides so much in terms of importance to fans of this world and cultural significance. Who doesn’t want to see Jude Law and Mads Mikkelsen at the center of more films in which they process their love and failed relationship? Grindelwald and Dumbledore is a story worth telling. And in a climate where we are making movies based on seasonal retail stores, I think we can find some patience for one of the most popular intellectual properties ever. This film has proven that the filmmakers have an understanding of how to successfully tell this story, and I so badly want to see them try.

Thank you for reading! What are your thoughts on Fantastic Beasts: The Secrets of Dumbledore? Comment down below!

Harry Potter Should Have Died in ‘The Goblet...