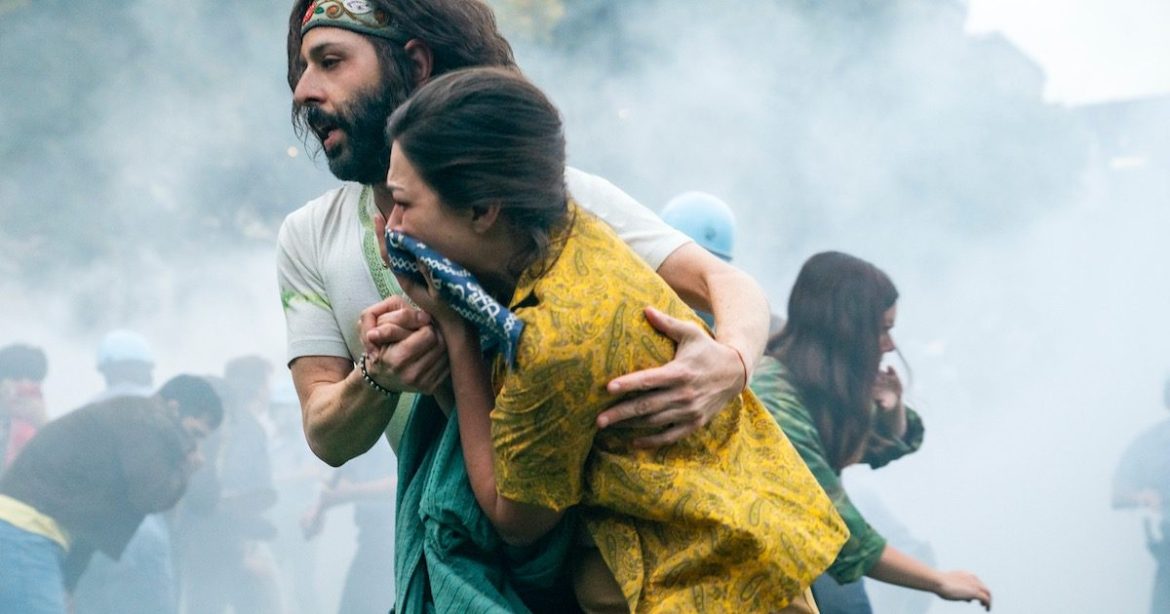 Warning: this article contains more nuance than its title.

Remember when Parasite won Best Picture? That was this year. It’s absurd to think how oblivious we all were then. Looking back on that night right now is like looking back at the top of the cliff we fell off of, right as we’re about to hit the ground. The view was so beautiful; if only we had looked where we were stepping.

Ten thousand years later, we are again entering what would typically be considered awards season. And to me at least, it seems clearer than ever that while 2020 has been a catastrophic year for cinemas, it has been a revelatory one for cinema itself. Which is why Aaron Sorkin’s The Trial of the Chicago 7 was a very conflicting, and ultimately saddening, viewing experience.

Now let me be clear: The Trial of the Chicago 7 is a fine film, serving as a step forward for Sorkin as a director. Whereas his 2017 debut Molly’s Game was a bland exercise in almost every possible way, this felt like an actual movie, complete with a great ensemble cast that excels at delivering all of Sorkin’s spicy sentences. Mark Rylance, Joseph Gordon-Levitt, and Frank Langella are lovely as always, Sacha Baron Cohen, Yahya Abdul-Mateen II, and Jeremy Strong are standouts, and Eddie Redmayne is also there (I’m kidding, he’s good too). As for the script, Sorkin is completely at home in the courtroom (it is where he got his start, after all), and his cross-cutting skills are sharp enough they could cut a diamond. I even thought the ending worked for what it was.

However, The Trial of the Chicago 7 is not in dire need of praise or recommendation. In fact, it’s swimming in it. And as a result, it’s quickly becoming a frontrunner for awards. It is this fact that frustrates me so.

Let’s go back two years. It’s late 2018, and the awards season buzz is loud. There are a lot of great films contending for the spotlight. Specifically, there are a lot of bold and brilliant films directly addressing racial issues in this country getting some attention. Namely:

Each of these films are completely distinct visions commenting on the same broken systems that have been built to oppress people of color in the United States (yes, Black Panther included). But what film takes the top prize at the Academy Awards in the end? Green Book, a film from a White director centering the White perspective on racism, which serves as a pat on White people’s backs, letting us know that “the real solution to prejudice is friendship.”

Green Book, at least in my view, is a perfectly average film; there’s nothing blatantly offensive in it, it’s just fine. But by putting Green Book on the pedestal above all the other films that were so much more nuanced and provocative and just plain better, the Academy offered everyone working on pushing cinema and its content forward a hearty slap in the face.

Which brings me back to The Trial of the Chicago 7. Sorkin is definitely speaking to the times we’re living in right now, and he’s doing it competently. But look at the year we’ve been having, friends! Look at it! With all the blockbusters and Oscar-bait people have grown so attached to gone, the indie has had a year in the spotlight; a new small or non-traditional release has dominated the discourse practically every week. An even cooler fact: a majority of the high-profile films to come out have been directed by women and people of color. And it’s not like the quality of the releases has dipped any, or lost their edge. I’ll throw out a few titles:

All these films, again, are completely distinct visions. Again, they are all commenting on the broken systems that oppress groups of people in the United States (yes, Bacurau and First Cow included). And again, they are all amazing and award-worthy. So are we really going to let all of the momentum pushing for a less conventional, more provocative, and more inclusive 2021 Academy Awards be sideswiped by The Trial of Chicago 7, a film which, despite literally being about police brutality towards protesters, centers Whiteness and tries its darndest to leave the viewer feeling warm and fuzzy? Or are we going to continue in the path of Parasite, and celebrate the truly revolutionary cinema given to us?

I sincerely hope that this article ages poorly. I hope The Trial of the Chicago 7 is acknowledged and then moved past, and that all the awards go to all the uniquely incredible work that has had a once-in-a-lifetime opportunity to shine this year. Even so, Sorkin has offered a very comfortable choice for White Academy voters to select when it comes time to choose what to hold up as the film of 2020, and I fear that we will yet again be let down.

Thank you for reading! Have you seen The Trial of the Chicago 7? Comment down below!

[…] of all the awards bodies awarding the same films over and over? Well, how about an entirely unconventional awards ceremony, presented in a single article, sourced […]

[…] contempt for Aaron Sorkin’s The Trial of the Chicago 7 continues to grow. It’s a movie seemingly designed by Bradley Whitford’s character from […]

Wow! This feature has teeth.