Alex Thompson's follow-up to 'Saint Frances' is a paranoid, ambitious horror film centering a medical resident haunted by his past. 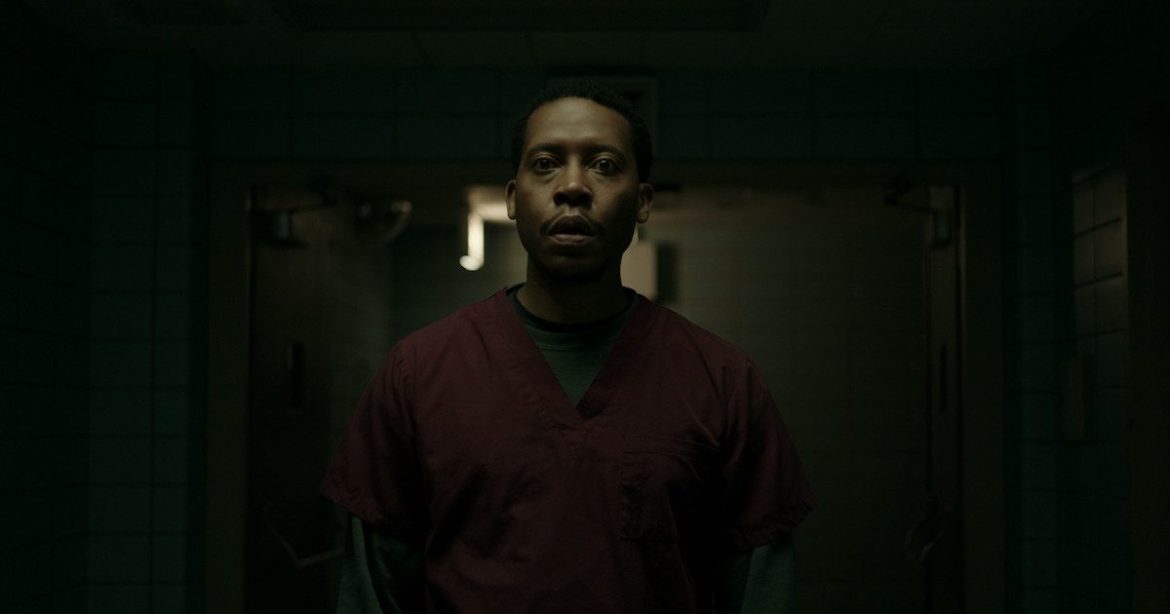 Hot off the heels of winning the SXSW Audience Award with his charming, witty, and near-universally loved directorial debut, Saint Frances, writer-director Alex Thompson’s return to the silver screen appears to be a complete tonal shift, with his next feature, Rounding: an intensely cerebral and anxious horror-thriller that’s grounded by a character study of disorienting force. It’s an enormous change in pace, and one that initially takes some adjusting to, but it’s sold so convincingly you’d think Thompson had a knack for more suspenseful material in him from the beginning. Right from the offset, Rounding establishes its narrative’s tense foundation by opening on the sight of a medical resident named James (Namir Smallwood), whose first major action in the film is witnessing the death of an older patient he’s been tending to — an incident that knocks him off his axis so badly it causes him to collapse in the moment, and leaves him with terrible anxiety in the months that follow, as he moves to another hospital in Greenville, a rural town, to somehow find his way back to a fresh start.

As James grows more acclimated to the hospital in Greenville, however, he’s already got a long road of struggle ahead of him. His interactions with patients are fraught with difficulties, which spikes the pressure placed on him already and leads to him being placed by his supervisor, Dr. Harrison (Michael Potts), into a series of classes about effective patient-doctor interactions. Meanwhile, Helen (Sidney Flanigan) — a patient at the hospital who’s been admitted countless times for various asthma problems — seems to be of particular concern for James, who can’t seem to parse why she’s being given more intense treatments for relatively inconspicuous lab results. A ticking countdown clock gets thrown in the mix when James finds out Helen’s due to receive a lung transplant, a drastic measure that has him questioning Helen’s mother’s (Rebecca Spence) intentions, as well as the rest of the staff’s aversion to confronting James’s suspicions — all of which is piled onto his own deteriorating health and a devastating ankle injury he’s suffering from. As these situations escalate around James, the demons of his past begin catching up, barreling him down a path of paranoia and anxiety that’s grounded in a starkly convincing psychological reality.

Thompson’s intricately detailed world serves as a near-perfect complement to the impressive control he exercises over atmosphere and tension — only further supported by how his and co-writer Christopher Thompson’s father, who is himself a doctor, participating in the film’s production as a consultant, likely offering this film a much-needed and deeply robust boost in realism. From the uncomfortably noisy shared residence that James is made to live in with his fellow colleagues, to the constant, frantic back-and-forth of hospital staff between rooms prompted by the shrill beeping of pagers, Thompson’s efforts to bring as many of the minute details of the medical facilities James works in create a firm foundation for him to then expand upon in rather tense ways befitting of Rounding‘s thriller-horror conceit. The end result of these efforts are expertly deployed moments of nervous, anxiety-inducing sound design complemented by Quinn Tsan’s unsettling soundtrack, as well as Nate Hurtseller’s shadow-obscured, often grimily-lit cinematography that adds to the obscurity and tension James feels on nearly every corner, and in nearly every situation he faces. It’s all made out to be a world where the overnight strain of working as a medical resident are shown as a pummeling and exhausting experience, both spiritually and physically, and when the character at the center of it all is already on the verge of being easily destabilized from more concerning experiences, that degree of exhaustion and disorientation only puts the audience in a greater state of suspense.

Perhaps the most obvious highlight of Rounding, to that end, is none other than a phenomenal Namir Smallwood — an actor whose capabilities are already so clearly defined by how well he’s able to tackle James’s uncertain state of mind all throughout the film’s runtime. Few portrayals of anxiety are able to capture the paralyzing, stuttering sensation of being stuck in a discomforting situation, or the physicality of the panic that arises in moments of sincere urgency, but Smallwood’s performance grounds James’ downward spiral in the ways he’s been reformed and shaped by his previous trauma, completely selling the idea that James is acting out of desperation not to repeat his prior mistakes. With such an intensive focus on its main character, Rounding‘s supporting cast — featuring many returning performers from Saint Frances — inevitably doesn’t get as much of a balanced share in screen time, but what they’re able to offer even within that limited space all convincingly contributes to James’s situation. Sidney Flanigan, who returns from her breakout role in Never Rarely Sometimes Always, might not get all that much to do relative to Smallwood, but the charm she contributes adds to the more understated quality of her performance as Helen and how she views her own rather ambiguous situation, even if there’s only so much space that the story ultimately offers her. Michael Potts also finds much to do as the seemingly sage Dr. Harrison, whose every interaction with Smallwood — effectively mentor-protegé interactions, from a certain point of view — is offered more and more layers of intrigue as James uncovers more details about Helen’s ailment that he confronts Harrison with.

All of this contributes to a general sense of great ambition that Rounding plays into — it’s not only a character study on the effects of trauma in key situations, but also a medical-procedural thriller, not to mention a film that exhibits shades of becoming a creature-feature horror in certain, more hallucinatory scenes. It’s the character-study aspect of the film that many will feel has the most tightly-knit execution, thanks in no small part to Smallwood’s many feats, and while the other two elements certainly still have a sizable and somewhat disappointing amount of unused potential even once the credits begin to roll, that certainly doesn’t mean they don’t at least contribute to Rounding‘s greater aims as is, building onto the character study at hand with stylistic genre-oriented decisions that further amplify and recontextualize the psychological realities grounding James’s gradual breakdown. Combine that with Thompson and his crew’s solid grasp on atmosphere and technicalities, not to mention a stunning lead performance from Smallwood holding everything together, and you have a robust film on your hands that manages to fulfill a fair amount of the many things it sets out to achieve, seemingly without much difficulty. Above all else, Rounding manages to sell an immersive sense of impending dread like very few films of its ilk have — a film that knows fully well how shame, guilt, and the fear that results from them can be monsters of their own, all of which wield the power to bring everything crashing down around you.

For more information on Rounding and other films playing at the Tribeca Film Festival, check out their website.

Thank you for reading! What are your thoughts on Rounding? Comment down below!