Get hype, A24 bros! Another banger is coming your way. 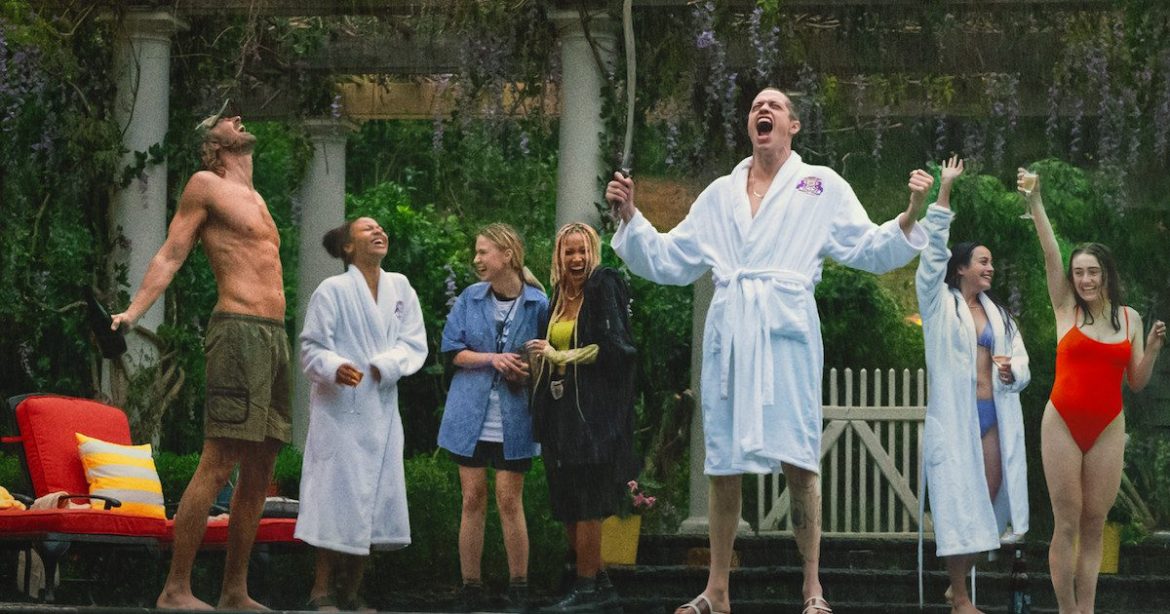 It seems that a fair portion of Film Twitter has turned on A24. I make this observation because I pretty consistently see people mocking it as a brand, or more specifically, the specific type of fan associated with the studio.

It is with a heavy heart that I, Spencer David Henderson, out myself as a huge A24 fan (plz don’t exile me). I even have a pair of A24 socks. This studio consistently attaches itself to genuinely interesting, thought-provoking, and challenging cinema. Don’t get me wrong, being a fan has bitten me in the ass on multiple occasions. (I am one of the few brave souls who sat through Woodshock.) So when it turned out that I was a bit skeptical of Bodies Bodies Bodies after watching the trailer, I still knew I would see it as the opening few seconds of the trailer had that sweet, sweet production studio logo. I could likely count on it at the very least to be an interesting experience.

Bodies Bodies Bodies is very much an ensemble piece that follows a group of rich young adults (and one older man — the great Lee Pace — who randomly tags along) as they spend a weekend partying at a mansion owned by David’s (Pete Davidson) parents. The dynamic is thrown off and challenged when Sophie (Amandla Stenberg) and Bee (Maria Bakalova) unexpectedly show up (alongside a hurricane). That night the group plays a seemingly harmless game they made up called “bodies bodies bodies”, but the night quickly turns into chaos when one of them turns up dead and the remaining group is left wondering which of them is responsible.

This film is a total blast from beginning to end, and right off the bat, I want to give a massive amount of credit to the script by Sarah DeLappe. The dialogue is really intelligent and biting. The way the characters talk feels stylized and of our modern times with buzzwords of the day often hurled as insults or attempted methods of defense. All of this is tremendously well done, and exceptionally funny. Bodies Bodies Bodies is very much a satire of the horror genre told through the lens of today and humans’ complicated relationship with technology, the internet, and social media. The horror of this film comes from the ways we communicate with each other (as well as the ways that we don’t).

Halina Reijn’s direction is incredibly strong. A lot of this film is very dark, and I love the way the characters use the flashlight features on their iPhones. It felt so real and funny in that way, and oftentimes the shot composition and the blocking are extremely claustrophobic in highly effective ways. There are some very well-executed sequences, that while not very showy, are efficient and exciting. This is a movie that is very heightened and stylized, but it feels honest in its portrayal of 21st-century life.

The ensemble cast also deserves a huge level of praise. This is one of those films where every actor plays their character to perfection. I’m really impressed by how much this friend group feels like it had a complex history that had conflicts that hadn’t been addressed. There are subtleties to each performance that are very fun for a film with a big whodunnit setup. I really like Myha’la Herrold and Lee Pace here, however, the real MVP of the cast is Rachel Sennott. She’s absolutely brilliant. Her performance as Alice is so funny and layered. She steals every single scene.

Bodies Bodies Bodies is one of those types of horror films that you are going to want to see with a crowd. Some moments are crafted to elicit a strong emotional reaction, whether it be laughter, shock, terror, or disgust. It was fun to experience this movie with a crowd who seemed to be enjoying it as much as I was. When the twists and turns start coming, it was fun to hear everyone react to those scenes.

At the beginning of this review, I attempted to explain my position as a fan of A24 as a studio. I already feel justified in my continued position with the release of Everything Everywhere All At Once, which is easily my favorite film of the year, but releasing a film like Bodies Bodies Bodies makes it pretty easy for me to stick to my guns. It seems they have a really good handle on the type of horror films that they want to make. In this reviewer’s opinion, they consistently knock it out of the park.