‘E.T.’ Returns to the Big Screen… This Time in IMAX!

This past month, the little alien from outer space returned to theaters. Enter 'E.T.' 40 years later. 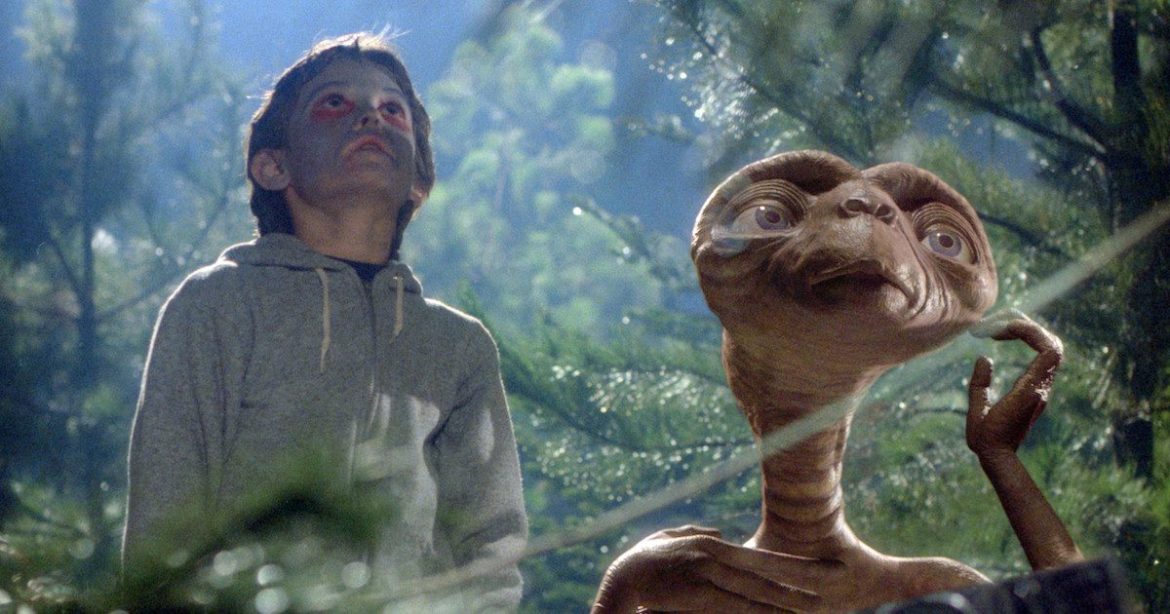 This year marked the 40th anniversary of cinema’s most popular alien and his debut on the big screen. The decision to bring back the classic film in IMAX in the dog days of August at the movie theaters was one that I took notice of immediately. E.T. was never one of my childhood favorites, nor have I regarded it as one of my top choices from Spielberg’s library of classics, but something about this announcement piqued my interest. Walking into that IMAX theater last Tuesday night, surrounded by a crowd of maybe twenty others, who I presume love the film, this would be just the second or third time that I had ever watched the 1982 classic.

I have been very fortunate this summer, revisiting classics like Raiders of the Lost Ark, Blade Runner, and Vertigo on the big screen. I’ve made an effort to seek out these films, whether they be special IMAX screenings at my local chain theater or showings at an independent theater a ways away, it has become something that I will make time for. Experiencing classics such as these on the big screen has enhanced my experience with them in every conceivable way, and I could only hope that through this review, others seek out a similar experience. It is one that I will surely cherish.

There is so much to be enthralled by with E.T.; right off the bat, it is superbly compelling. We see this strange creature, left behind as his ship departs him due to a group of angry yet curious humans who want to know what the hell just landed in the hills of suburban California. As a viewer, you feel equally intrigued as you are worried for this little alien guy. It’s a remarkable setup, and playing out on the screen to the backdrop of what is most certainly one of John Williams’ most perfect scores, it’s like magic. The music in this film is a character in its own right. John Williams truly cooked up a brilliantly touching and emotional musical score that makes us feel all the right emotions at all the right times in what is a rather simple tale of friendship, acceptance, and of course, adventure. It is a monumental achievement in music, and in almost every way it elevates the film.

There’s a scene early on when our protagonist Elliot swears up and down to his mother and siblings that he saw a creature in the shed. It’s a scene that is more about those around him reacting to him than it is about Elliot himself. He’s a young boy with a clearly large imagination, and while Elliot isn’t crazy and there is indeed a creature in the shed, it’s the reaction that gives you insight into who he is as a person. I was completely taken away by his character, and what was merely an insignificant role for me a couple of years ago when I watched this movie, has now become the strongest part of it all. He is so young and so immature but what’s conveyed through him is a clear need to feel like he has purpose, meaning, and connection. Henry Thomas’ portrayal of Elliot is what brings you to tears in E.T. He’s the film’s heart and soul.

Henry Thomas is brilliant, and he is one of the many brilliant child actors that Steven Spielberg has employed over the years. Another one of the key standout performances from youth on screen is E.T.’s very own, Drew Barrymore. She’s hilarious, and despite being just six years old at the time of filming, she doesn’t stick out as some sort of distraction. Gertie is great!

In direct relation to Elliot, this film is overall about friendship, and the importance of that bond and connection one has as a child. It is also very clearly a story of acceptance. Outside of the Taylor family, the film features a slew of other neighborhood kids who mostly hang around with Elliot’s older brother, Michael. It’s their cynical and teasing outlook of and toward Elliot that makes this film’s finale so much more rousing. We feel for poor little Elliot as he gets berated by his older brother’s pals throughout the film, teasing him about a bunch of different little things. It’s not like Elliot can’t dish it back out though, he’s a kid who holds his own for sure, but it’s in this film’s final moments that we get exactly the payoff we needed, and in glorious IMAX, it’s a wonder to behold.

The entirety of what I spoke about comes together in a gorgeous conclusion that sees the boys ride off into the sky with E.T., hoping to help him finally go home. It’s everything that this movie has led to, and it just works as a piece of cinematic wonder. The boys lift off out of the way of the cops to the sound of John Williams’ brilliantly magical music. I appreciate this conclusion despite it being a framework for the finales that we often see in family films. It just works, setting the standard for family-friendly cinema. It’s fair to say that this standard has rarely been met in the decades following the release, and the utter movie magic that was so present in Spielberg’s greatest hits in the 1970s-90s is just rarely seen on the big screen anymore. E.T. is the definition of movie magic, and it is just so pure.

In an ever-changing theatrical marketplace, utilizing films such as E.T.  to lure in audiences is something that movie theaters need to consider platforming. There has certainly been a resurgence in moviegoing, but we have seen a lull as of late due to the lack of new movies hitting the big screen. The reliance on bringing back old classics is something we saw very early on when COVID-19 first impacted the planet over two years ago, and this is something that I don’t think should fade away as we begin to settle back into a normal moviegoing environment. Keep bringing the old classics to the big screen, it is an absolute treat and an experience that will allow for multi-generational connections.

Thank you for reading! What are your thoughts on E.T.? Comment down below!