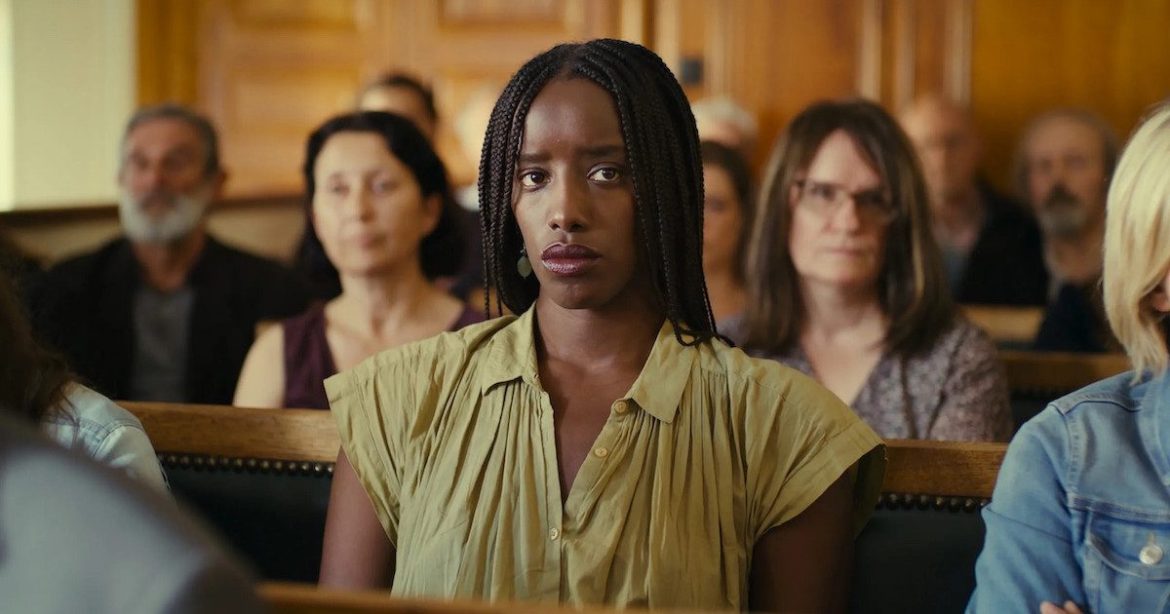 As someone who spent the first eight years of my life in a turbulent, abusive household, generational trauma is something I have thought about often throughout my adulthood. For some, there is a palpable fear that they will be the next in a family line of prolonged suffering, abuse, and neglect. This thematic territory is what is explored in Alice Diop’s challenging first narrative feature, Saint Omer, to great effect.

Saint Omer follows Rama, a professor who travels to the titular town of Saint-Omer for a murder trial she is researching for a book. The accused is a woman named Laurence Coly who reportedly committed infanticide; however, no one really knows why she did it. As details of the case begin to be exposed and revealed, Rama begins to spiral downwards as she reflects upon her own difficult upbringing with her fractured relationship with her mother, her culture as a first-generation immigrant, and her potential future as a mother in fear of continuing the cycle.

One of my favorite feelings as a viewer is when I know the filmmaker considers me an intelligent person who is capable of being challenged and coming to my own conclusions, even when they are difficult. Perhaps due to her experience as a documentarian, Diop is such a filmmaker. Saint Omer is completely uninterested in providing any easy answers or catharsis. There are moments in this film when a character will look directly into the camera, and it feels as if Diop is interrogating the viewer’s suspicions, biases, and prejudices. I admire that the film never attempts to take the easy route in what it is trying to say; it isn’t afraid to make one feel uncomfortable or uncertain about the characters. It adds a layer of complexity that I find highly refreshing.

Likewise, Diop gets great performances out of her cast. While Kayije Kagame as Rama is the lead character, she doesn’t have much dialogue in the film. Her performance is very expressive and fueled by raw emotion, but it somehow still manages to feel deeply layered. She carries a lot of emotional baggage, and as the narrative progresses, I felt for this character and connected with her.

Guslagie Malanga stole the movie for me as Laurence Coly. She operates almost as the polar opposite of Rama: she’s given most of the dialogue and shows very little emotion. I found her character instantly compelling, and seeing as the vast majority of the film is a court case interrogating her, I’m glad they have such an effective character and performance to hold it all together.

Saint Omer’s central case is inspired by a real-life case that took place in 2013. Often, when making a film based on a real-life event or, especially, a court case, there is a very fine line to walk between a nuanced narrative versus a manipulative one. In the case of manipulation, I think of something like The Trial of the Chicago 7, which is a film that works for many people, but even its defenders can’t voice a convincing case for it not being manipulative. To see a film that takes a heinous act such as infanticide, and provides the guilty party with any shred of nuance and humanity is something that is very challenging to do and I applaud a film that does it so fearlessly while appearing as if it were effortless.

Saint Omer is ultimately about generational trauma and how it burrows deep into a person until it is a part of them. That, if you do a bit of soul-searching, you might see the terrifying reality that you have become the parent who neglected and treated you with contempt. These are heavy, uncomfortable, and challenging things for a film to explore, but the fact that this one explores them so well makes it very worthy of your attention.

Thank you for reading! What are your thoughts on Saint Omer? Comment down below!