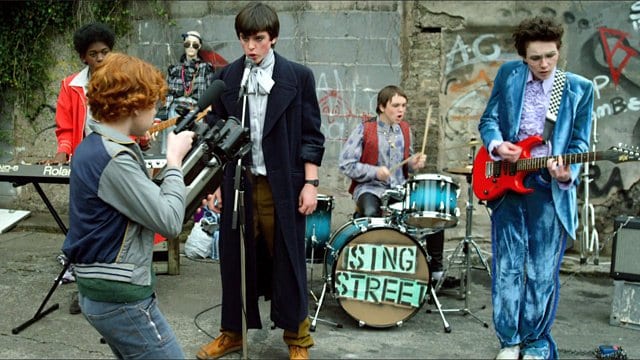 The next installment of the Netflix Review segment brings us a sleeper hit from 2016, Sing Street!  Often called the biggest snub of this year’s Academy Awards, I made sure to check the film out and see what all the fuss was about.  The following review will be spoiler free.

We follow Conor (Walsh-Peelo) as a fifteen year old in 1980’s Dublin who has just changed to a public school in the inner-city due to his family’s money troubles.  One day on the way to school, Conor becomes transfixed with a beautiful girl named Raphina (Boynton) who is working to become a model.  In order to try to win her over, Conor asks her to be the star of his band’s music videos.  There’s just one problem: Conor isn’t in a band.  Conor then searches for help from kids in the area alongside his older brother (Reynor) to get the girl all the while escaping the troubles of his everyday life.

image via F This Movie!

Despite only making a shade over $3 million at the box office during its theatrical run, Sing Street has since developed a devoted, smaller following of movie lovers since its release, giving the movie somewhat of an added boost in popularity.  Sing Street was, however, snubbed across the board from Oscar consideration despite its 96% rating on Rotten Tomatoes which begs the question, why hasn’t the movie received more praise and popularity?

The predominant sentiment from pundits everywhere is that The Weinstein Company, the film’s distributor, was unsure of how the product would fair with audiences, causing a lack of a marketing budget for the film.  Lacking any type of money to make an award season push, the film was released in the middle of April in a limited amount of theaters and quickly left theaters thereafter.  The film was so widely popular by the people who saw it that the YouTube favorite Screen Junkies even offered to set up a screening of the movie to reach more audiences.  However, The Weinstein Company did not respond.

From the synopsis given above, you might think that Sing Street is a cliche-riddled movie. While is definitely revisits story beats we’ve seen before, in done in such a way that is so endearing and likable.  Everything in this film is full of optimism and hope that it is just so darn infectious.

Ferdio Walsh-Peelo gives an outstanding performance in the lead role.  He grows from a timid kid into someone that finds his calling.  His interactions with Lucy Boynton’s character Raphina are so touching that it easily transcends the typical on screen romance.  I’d also like to give a shout out to Jack Reynor for his performance as the older brother.  He’s easily one of my least favorite parts of Transformers: Age of Extinction, so I’m glad he proved me wrong as a more than capable actor. However, Sing Street‘s main calling card is undoubtedly the music and the culture surrounding it.  There’s an extraordinary amount of original songs embedded within the movie.  It’s shameful that the main theme “Drive it Like You Stole it” didn’t receive a nomination.  If you somehow don’t find yourself engaged in the characters, you can bank on the fact that you’ll be humming the tunes of Sing Street for days.

A really cool element of this movie is how the characters shift their moods with their music.  There’s so many costume changes that parody the crazy styles of bands in the 80’s that make you chuckle with every scene.  Unlike many other movies that involve music, the music in Sing Street is integral to the character arcs of each person.

image via United By Pop

Above all else, Sing Street just makes you feel good after watching it.  I definitely would have liked more development from the dynamic between Conor and his parents or his financial restraints, but other elements of Sing Street most definitely make up for its flaws.  I could sit by behind my computer and pick this movie apart to try to seem smart or insightful, but in the end, movies are about how they make you feel.  As the credits fell over the screen, I had big smile on my face, gleaming from all the cheer I had watched for the last hour and forty minutes.

In the end, Sing Street may not cover completely new ground, but it’s filled with lovely characters and some of the best music in a movie of recent memory.  Sing Street should definitely have been nominated for many Oscars, but I’ll settle for this review helping the film to reach a new audience, because more people need to see this movie.  It gets an A.  Definitely check this movie out the next time you find yourself scrolling through Netflix.

Thanks for reading!  Have you seen Sing Street?  Comment below with your thoughts!

John Carney is rapidly becoming one of my favorite directors. Once was incredibly good. As was Begin Again. I didn’t know much about Sing Street when it was released, but I saw the DVD at the library and gave it a shot. I was very pleasantly surprised.

I went to high school and college in the 80s, and Sing Street made me nostalgic for the music of my youth. I wasn’t into that style of music (Duran Duran, A Flock of Seagulls) but it still makes me remember MTV, music videos, synths, etc. The music in

Carney loves music, and it is readily apparent from the subject matter of his movies. I’m looking forward to his next film.

Totally agree! He’s really making a nice career for himself. I hope he gets a bigger project soon so he can really flex his directing muscles

This was my favorite movie of 2016. Nice review!

Absolutely! It’s a crime that it’s not nominated for something!

We loved this film!! It’s absolutely wonderful :-) Really excellent in every way. I really enjoyed reading your review, your experience of the film is interesting to read.

Have you seen “Middle School: The Worst Years of My Life”? That’s another great Netflix one we watched the other day. I’d like to read your review of that movie :-)

I haven’t but I’ll keep it in mind next time I do a Netflix review!

Reblogged this on Wag 'n Bietjie.

Sing Street is on my watchlist, I regret not seeing it in the theater, but I mean to see it asap.

It’s certainly worth your time. It’s also a shorter movie so you can breeze through it!

Good review. Love this movie. Deserves to be seen by more. The video sequence for ‘drive it like you stole it’ is amazing.

It really is! It feels like an older music video

Nice review! I loved Sing Street! Totally snubbed at the Oscars. Simple premise, but beautiful story! It was my favorite movie of 2016. Thanks for the follow by the way! Glad you enjoyed the posts!

My brother has been trying to convince me to watch it. Its been on my list, but I just haven’t felt like watching it yet. Sounds like my kind of film though.

It’s really worth your time! You can’t help but like it!

Sing Street was awesome. It was so good that I watched it the next day to experience it again with my brother. Loved it and great music too!

Yes! I immediately went and looked up the soundtrack and played it on repeat. I also love Girls. Such a great movie

We could talk for hours about all the great songs in this movie! lol I can’t really see how someone could dislike this movie wholeheartedly with the amount of fun in it.

Film Review – War for the Planet of...