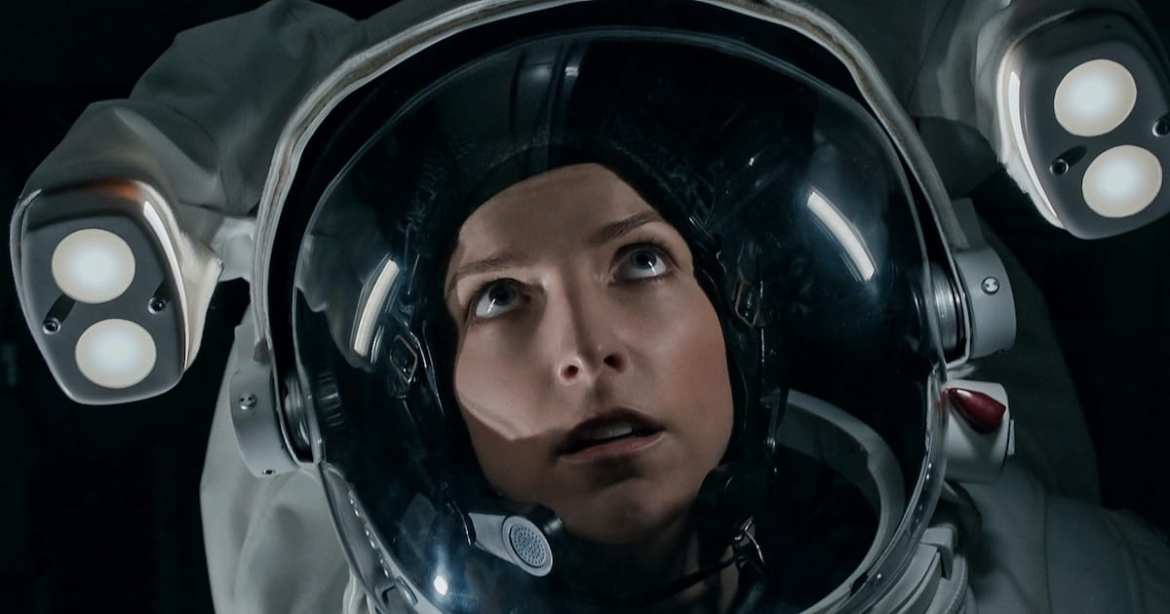 With the world slowly starting to show signs of normalcy, the impact of COVID-19 on the entertainment industry, and specifically film, is undeniable. The visible wake of the impact from the virus grows more apparent by the day. Theaters are closing down, studios are consolidating, and the slow release of new movies feels like a drip from a once-gushing faucet. Where it is less visible but maybe even more relevant, is found in how we consume movies. From how we physically watch them to how we interpret what we watch, COVID changed it all. It’s difficult to watch a film, any film really, but particularly a new one, void of the reality outside your door. That challenge makes the newest Netflix release, Stowaway, an interesting entry into movie culture. A movie that wears its heart on its sleeve and becomes a slave for that harsh reality by reminding us of the importance of humanity.

While I am far from the first to point out the impact of COVID, it remains an important thing to continuously discuss. Even more so are the realities that the virus has exposed. It’s a strange time in America, with hatred and fear seeming to guide everything we see, read, and hear. We feel as divided as ever, and in moments like this, an effective way to speak to the moment is indirectly. A Netflix space thriller that’s mostly without plot, ends up being the perfect vehicle for possibly our most important message. In danger of approaching hyperbole, I’ll present it another way; humanity is something we all need a bit more of right now. Stowaway is the most surprisingly profound presentation of it.

Using Characters to Drive the Tension

Stowaway is a small space thriller from director Joe Penna, in which a three-person mission to Mars is jeopardized by an unintended passenger. Anyone familiar with this type of movie can fill in the blanks as to what they think happens. However, Penna (and his co-writer Ryan Morrison) take it to a different place. Stowaway is more of an intimate psychological or even social thriller. It’s less about things going wrong in space and more about a group of people making tough decisions. While the latter may not sound nearly as thrilling, it comes across as much more than that. The tension — and there are loads of it — is fueled by the drama, which is palpable because of its authenticity.

Penna and Morrison create full characters, ones that allow for genuine connection. This is where the humanity of the film starts. Each character is rolled out beautifully over the course of the film, which allows you to grow closer to them with each new thing you learn. Understanding their motivations, goals, and history gives room for the themes of the film to come through. Stowaway is mostly void of plot, which makes the characters all the more important, because they drive the themes and tension. 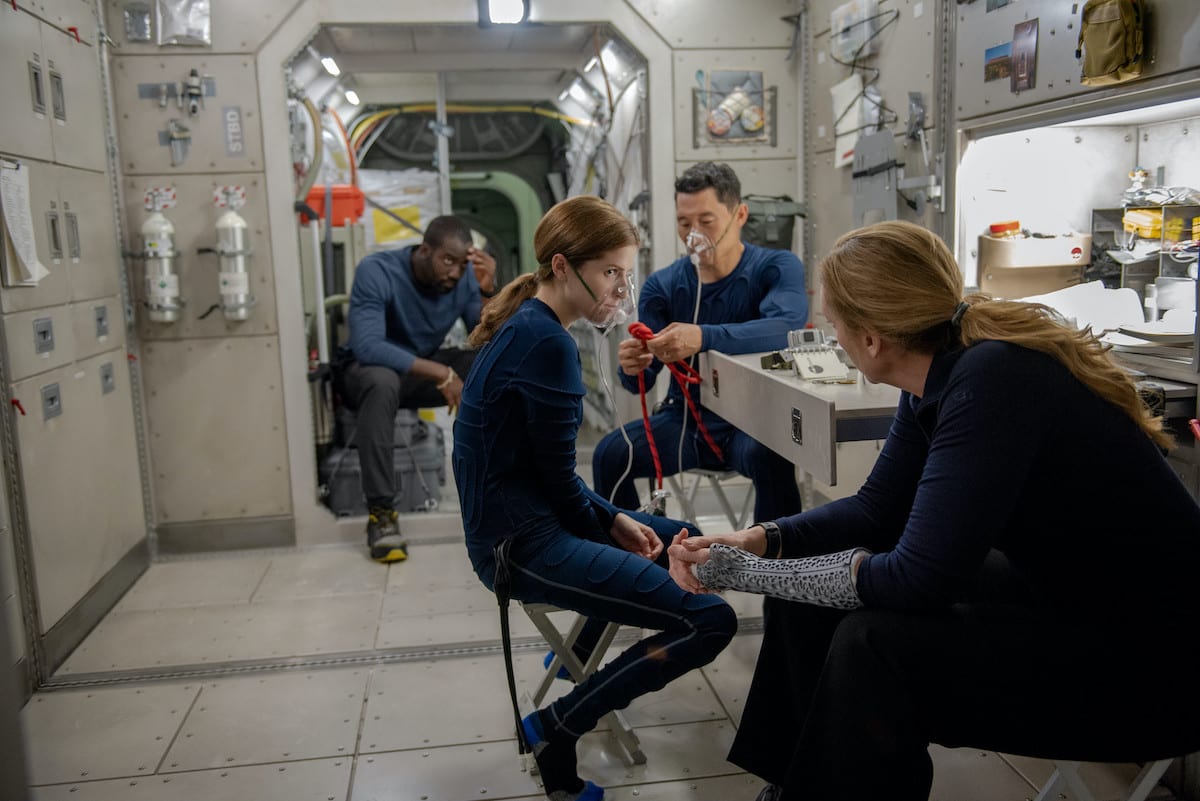 On the page, Penna and Morrison create great characters, but it’s the performances that bring them to life. Anna Kendrick, Toni Collette, Daniel Dae Kim, and Shamier Anderson all give great performances. Ultimately, Stowaway is a film about humanity and sacrificing for one another. The true weight and emotion of this theme is tied to their performances. Great chemistry adds a good dynamic to the film, and it does crackle when more than two of them are together. However, the strength of these performances comes from the more intimate moments. Either when they’re alone or in a quieter two-person conversation, the film is at its best when these performers have the space to show the real weight of their situation.

Anna Kendrick and Daniel Dae Kim are the standouts in the film. Toni Collette is great, as usual, and leads the film with her presence more than anything else. Shamier Anderson is an actor I’m unfamiliar with and comes across as quite impressive, really living in what is a horrible situation. However, it’s Kendrick that carries the emotional weight of the theme and Kim that provides real depth to this story. Zoe Levenson is a perfect use of Kendrick’s best acting traits. Kendrick is charming, relatable, and sincere. Translating those qualities into Levenson allows for all of the emotional weight of the film to land because you buy Kendrick. You believe her and connect with her, and thus connect with the theme of the film. It’s beautiful work from her, in what is ultimately one of her best performances.

As David Kim, Daniel Dae Kim does more of the philosophical heavy lifting in the film. Each character offers a different perspective on their situation, but it’s Kim that has a difficult one to get across. He makes an incredibly difficult choice, that is often villainized in stories like this, but here there is humanity in the choice. His conflict is all over his face and you more so sympathize with the situation than you do react negatively. Therein lies the beautiful elements of Stowaway. The position these people find themselves in is awful and every choice is rife with complications and terrible outcomes. However, none of these people are positioned negatively but instead with much grace and nuance they are allowed to explore their options. We walk through these options with them and ultimately find ourselves (along with the characters) in a place of greater understanding of what a true heroic decision is.

Stowaway is a right movie, right time situation. It is a good movie for the time we are currently in because it appeals to the best parts of us. It’s not the most deeply profound film or a cinematic masterpiece but it’s more like a breath of fresh air. Seeing people in an impossible situation do what’s best for others and sacrifice for the betterment of the people around them, is refreshing to see. No one is forced into doing what’s right, but they choose to. By making that choice they inspire the viewer to do so as well. Many movies will come out to reflect the Trump presidency, COVID-19, and the tumultuous state our nation currently finds itself in. Some will be tactful and brilliant, others will be more on the nose. But ultimately, the most impactful ones will be the ones that inspire us to love each other, express true humanity, and sacrifice for others. Stowaway does all that and it’s just so nice to see it.

Thank you for reading! What are your thoughts on Stowaway? Comment down below!

[…] I’ll present it another way; humanity is something we all need a bit more of right now. Stowaway is the most surprisingly profound presentation of […]