The next Oscar contender in theaters is the movie Fences adapted from the play of the same name.  The main stars of the film, Denzel Washington and Viola Davis have already been nominated for Golden Globes for their performances, so naturally I had to see for myself!  My review of Fences will be spoiler free.  Make sure to comment with your thoughts at the bottom of the page.

Fences is directed by Denzel Washington who also stars in the movie alongside Viola Davis.  The film follows Troy Maxson (Washington) in 1950’s Pittsburgh who is a garbage collector that was once a great baseball player in the Negro Leagues.  Maxson is prone to lashing out at his family because the color barrier in baseball wasn’t broken until after he was past his prime, making him unable to fully realize his gifts and continuously trying to scrap money together.  We first see him as a man who is simply trying to do right by his family, but as we peel back the layers of Troy Maxson, we learn that his character is much more complex than we once thought. 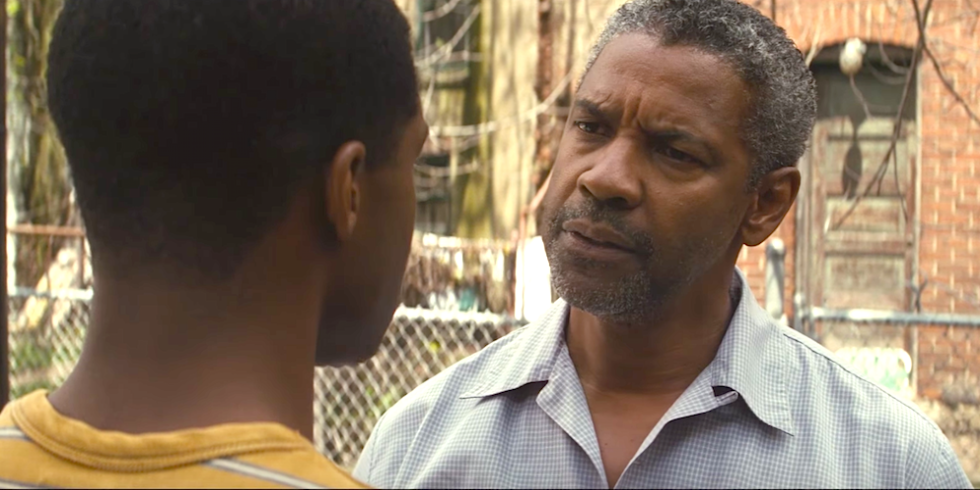 I really enjoy when talented individuals continue to expand their reach in their craft.  Denzel Washington has always been one of my favorite actors.  His ability to command attention on screen is so engaging as an audience member.  But I love that he continues to dabble in directing.  An actor of his talents certainly has an eye for creating a well crafted scene.  On top of that, we already know that Washington is a capable actor by his last directorial effort, The Great Debaters.  Additionally, he also starred in the play that Fences is adapted from, so he obviously has a firm grasp on the source material.

If you’ve seen the trailers, it obvious that this is a very character driven movie.  Since Fences was adapted from a play, you can imagine that there’s not a bunch of changes in scenery and locations so the film relies on pure acting talent to captivate the audience.  I think it was pretty genius to keep Denzel Washington and Viola Davis as the leads of the movie adaptation of the play.  In order for Fences to work as a film, it’s absolutely imperative to have a cast that works well together.

Fences feels very much like the play that it’s adapted from, for better or for worse.  You can even tell where the intermission of the play would fall within the movie.  The film relies on long soliloquies from characters to drive the plot and to create drama.  In fact, the movie practically takes place in one location for its entirety.  If you struggle to latch onto films that rely solely on dialogue, then Fences might not be the movie for you.  At times, you definitely get the sense that the movie drags because of it’s lack of a cinematic feel.

However, for those who are willing to handle this type of film, there are certainly rewards to be had.

Denzel Washington is absolutely enthralling as Troy Maxson.  He’ll begin a scene just joking around and having a nice time.  Then, all of a sudden, someone will something that just sets him off.  You can see the effect of someone else’s words just from Denzel eyes.  This nonverbal acting tells you everything you need to know about how Denzel feels without having to express it in words.  Denzel commands your attention on screen.  A couple of the speeches he has will make your jaw drop with their sheer power and gravitas.  He’ll definitely get nominated for his work.

Viola Davis also gives a wonderful performance as Rose.  She has a few speeches herself where she commands your attention (she even steals some scenes from Denzel).  She does a really solid job of acting as a nurturing mother as well as a strong independent woman.  Davis has a few scenes where she spontaneously breaks out in tears and you are completely moved by the emotion she is evoking.  She too will definitely be nominated.

Fences in general should be praised for documenting the lives of people seen too little on the big screen.  Fences has the ability to have a cultural impact on cinema if seen by enough people.  The film pulls no punches, unafraid to tackle issues such as race relations, mental handicaps, and parental influence, doing so with grace and strength.  Fences was once deemed unfilmable by many in the industry, and Denzel and his crew definitely helped proved that to be a wrong assertion.

Fences is definitely a departure from most cinematic endeavors.  But, it’s definitely a worthwhile viewing just to witness the sheer power of each performance.  Fences gets an A-.  If not anything else, Fences is a great acting lesson.

Have you seen Fences?  Comment below with your own thoughts on the movie to get the conversation going!

What should I review next?  Whether it’s old or new, the choice it up to you!  Thanks for reading!

I am a big fan of both of these great actors. I look forward to following your blog.

Thanks so much I really appreciate it!