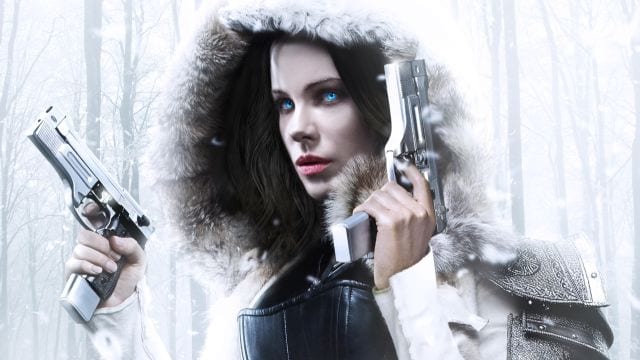 Well it’s finally January, and I can’t wait to review all the dumpster fire movies that studios plop into this month because they know it’s a lost cause.  The first of these movies is Underworld: Blood Wars which is the fifth installment in the Underworld franchise (unbelievably).  As always, the following film will be spoiler free.  Be sure to comment at the bottom of the page with your own thoughts.

Underworld: Blood Wars is directed by Anna Foerster and stars Kate Beckinsale and Theo James.  The film again follows Selene (Beckinsale) as she continues to avoid both the Lycan and Vampire clans who are still coming after her.  The Lycans are after Selene in order to discover the location of her daughter Eve whose blood could be the key to creating an army of Hybrids (someone who can be both Lycan and Vampire).  The Vampires, meanwhile, are after Selene for killing Vampire Elders.

Let’s be honest, other than the rather impressive cult following for these movies that somehow keep getting sequels made, no one’s looking forward to another poorly shot and directed horror-action movie that’s covered in that blue Instagram filter.  Despite this notion, the movie has been marketed like crazy on television and social media, hoping to convert new people to the franchise (like that would happen).

All joking aside, the film could do good business if it is a moderate success.  Without the major competition that movies in other months get, the film has already made $42.1 million on a $35 million budget from early release overseas.  The franchise continues to defy the odds and make profitable movies despite the highest rated movie of the franchise is only at a mere 31% on Rotten Tomatoes.  So that begs the question, how does Underworld succeed?  I can’t say I have the answer to that, but it probably doesn’t hurt that Kate Beckinsale is in tight leather for the entirety of the movie. After sitting through this slog of a movie, I’m almost certain that the executives of Sony Pictures sold their souls to the devil, because I haven’t the faintest clue how Underworld: Blood Wars made a single dime.

Let’s start first with the positives…

Moving on, the movie has a serious case of what I like to call the “Phantom Menace disease.”  The creative team attempts to move the plot forward by constant meetings of people sitting and talking or standing and talking and tries to pass it off as compelling storytelling.  Most of the dialogue is said very monotone and is also lifeless.  You are unable to latch onto any characters and are more likely to fall asleep. Kate Beckinsale is a good actress, but she doesn’t really show it in Underworld: Blood Wars.  There’s nothing much for her character Selene to do in this movie.  She has certainly been built up as our main hero who kicks all sorts of Lycan tail.  But, she mostly gets smacked around for practically the entirety of the movie while Theo James’ character David is pushed into the limelight.  Nothing about the characters is fun or memorable as we are left without a main hero to truly root for. When the characters are finally done talking to each other and the action occurs, the scenes are so choppily put together that it makes the fights almost incomprehensible.  The editing of Blood Wars is pretty sloppy throughout the rest of the film for that matter.  Scenes are curiously patches together that cause a lot of moments to feel disjointed.  There’s some pretty terrible slow motion shots that you can easily tell were not meant to be slow motion because they weren’t captured on a camera with enough frames per second to smooth out the motion.  The film even tries to sneak the exact same shot that it used previously in the film past you.  That just shows laziness if you ask me.

Now when you review a film, the best way to do so is to grade a movie on how well it made the movie it attempted to make.  You would never grade Schindler’s List on the merits of a comedy.  You would never, ever grade a movie like Underworld: Blood Wars like it was suppose to be an Oscar contender.  Rather, Blood Wars sets out to be a mindless action movie.  However, the movie does the worst thing possible by not being either good enough to be enjoyed or so bad that it can be enjoyed as trashy fun (which Underworld movies have been in past iterations).  Underworld: Blood Wars is just plain boring.  Fans of the franchise might enjoy this film, but all others need not apply. Thank you so much for reading!  Have you seen Underworld: Blood Wars?  Comment below with your thoughts!

What should I discuss next, whether it’s old or new, the choice is up to you!

I actually liked the first movie and it featured a female anti-hero (I have to admit I had a crush on Scott Speedman because of Felicity so I’m a bit biased on this). But the producers of this franchise never bothered to make any effort other than to make it cheap and marketable. Its more frustrating because Hollywood already thinks that female led movies don’t make money. Underworld and Resident Evil forever dipped in schlock material just add insult to injury.

Couldn’t agree more! Underworld has some nice source material and could really make some good movies with the proper creative team involved

“The creative team attempts to move the plot forward by constant meetings of people sitting and talking or standing and talking and tries to pass it off as compelling storytelling.”
There’s a 1960s film, Crack in the World, that takes up an astonishing amount of time (given the Earth is quite literally in the process of splitting in two) of having worried looking men sit around a board table and discuss it. Or having the core triangle work out their relationship issues.

It’s definitely possible to tell the story in that type of manner. A movie that comes to mind that I love if the Hateful Eight in which dialogue moves everything forward. But (thanks to Tarantino) the dialogue is so well-written that it’s very compelling. Blood Wars is so dry and unappealing that it’s very ineffective.

I saw the first movie for the first time last year, and my first thought when it finishes was “how did this get a sequel?” Now there’s five of them, and from what I’ve heard, most of them are pretty much the same movie.

Yup! It’s definitely more of the same with some frustration thrown in there since it’s the fifth installment lol

Wow! Tell me how you really feel lol. I actually liked it. Better than the last few installments.

Lol. Well good for you that you enjoyed it! I would never yell at/ridicule someone for liking a movie that I dislike. That’s what makes movies fun!

Well it definitely won’t win any awards but I thought it was fun. What is impressive is that it’s been 14 years and Kate Beckinsale can still fit into that suit. Lol clearly she has a portrait of herself hidden away ;)

Pretty much what I expected to see of this movie!

Do you plan to watch the season 4 Finale of Sherlock in cinemas?

Unfortunately, I haven’t really kept up to date on the series so I won’t be. But I am seeing Silence in a few hours!

Every Christopher Nolan Movie Ranked from Worst to...