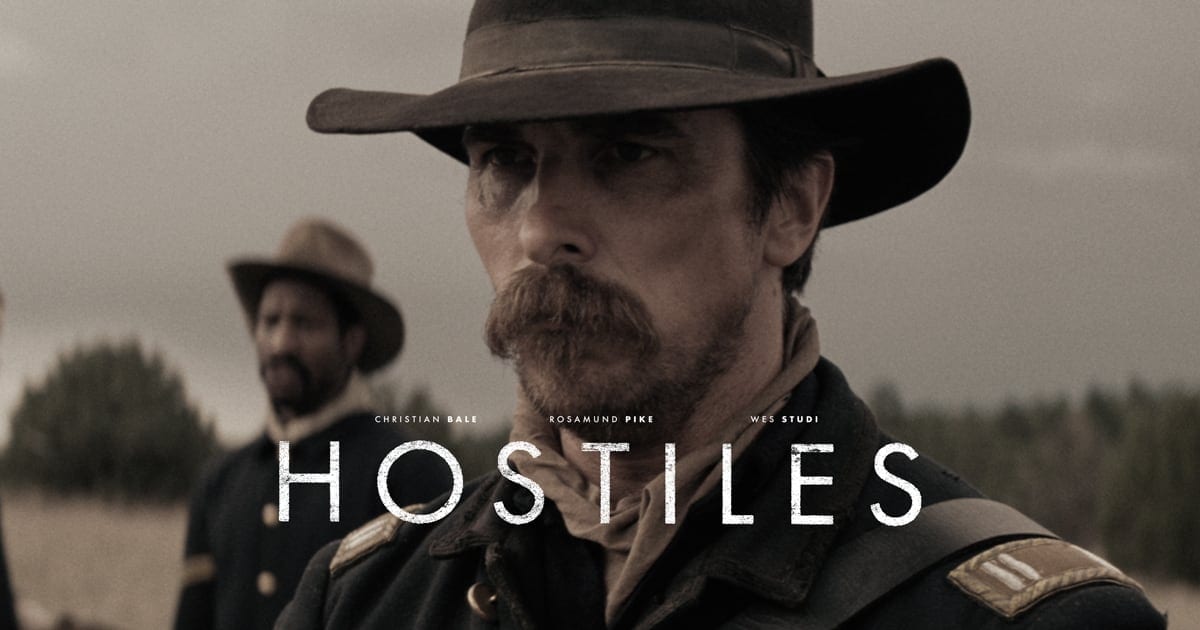 Following the release of the Oscar nominations for the 90th Academy Awards, some were wondering why Scott Cooper’s Hostiles didn’t receive much recognition.  With a great cast and a noteworthy backdrop, executives at Entertainment Studios hoped that Hostiles would become their first prestige picture.  However, that distinction is still primarily up to moviegoers (and critics) as they will always have final say on the matter.  With a wide release this weekend, mass audiences can begin to make up their mind on the project.  The following review will be spoiler free. 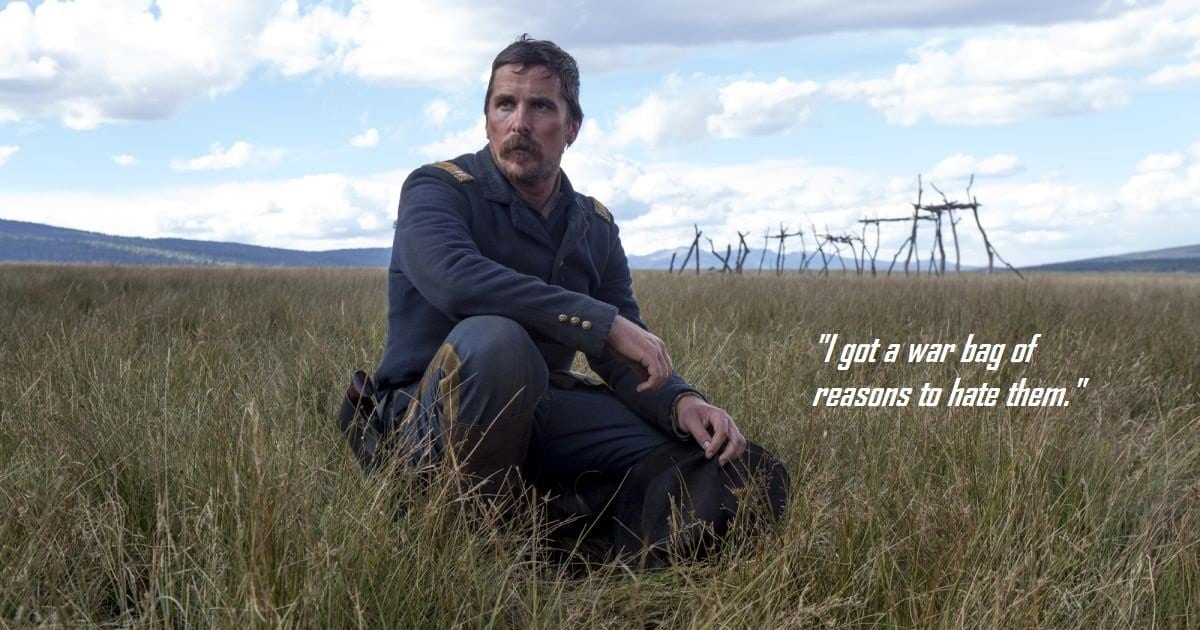 Capt. Joseph Blocker (Bale) has had a history of killing Native Americans during his time in the Army.  These “savages” as he calls them have killed many loved ones, deepening his hate of their kind.  However, before Joe’s retirement, his superior, Col. Abraham Biggs (Lang), has one more assignment for him: provide safe passage for Chief Yellow Hawk (Studi) as he returns home to Montana.  Propelled by President Harrison to carry out the assignment, Joe takes the Chief and his family through treacherous lands — encountering some dangerous adversaries along the way.

Leading up to its premiere at the Telluride Film Festival in September of 2017, Hostiles had not been able to gain much interest from studios — leaving it without a distributor as Oscar season approached.  Luckily, the film arm of Entertainment Studios swooped in to acquire the rights to the film.  As a result, the movie became the first prestige-focused film for the studio.

Entertainment Studios has been around since 1993, but it didn’t start distributing films until 2017 when it released 47 Meters Down.  When asked about the studio’s distribution model, Founder Byron Allen said the following:

“We’re chasing the studio crumbs. They don’t want movies that do $40 million to $60 million. We totally will be good with those numbers, and that is what we’re pursuing. Our thing is we are really big on slow roll-outs and small releases. Our philosophy…we believe in wide releases. We like to have movies that are 1,500-4,000 screens and we are chasing what the studios don’t want. They’re chasing much bigger. And we’re going to take their crumbs and make a gourmet meal. And then eventually we’ll move on to chasing more than their crumbs. But today we’re chasing the crumbs.”

Life as an independent distributor isn’t always easy, and everyone at Entertainment Studios is hoping that Hostiles will bring them closer to chasing more than crumbs.

Christian Bale transforms himself into an entirely different figure for each one of his roles.  In Hostiles, he becomes Joseph Blocker.  His voice never gets far above a mumble, but you feel his power with every word uttered.  Bale has a few stares that are truly piercing, staring into the souls of the other characters.

From years of killing and seeing horribly travesties as part of the Army in the Old West, Bale’s character has grown quite numb.  It’s quite a haunting idea that a man could become almost emotionless from years of hardship.  The film makes this notion a point of emphasis as Bale learns that his Native American counterparts are equally damaged (cue the title of the movie).  In this respect, we see a very solid character arc from Bale as he spends more time with Native Americans on his journey through America.

True to his character, Bale is mostly reserved throughout Hostiles.  However, this makes every bit of emotion that he shows incredibly powerful.

You go into every movie starring Christian Bale expecting a great performance — and that notion continues here.

However, Hostiles as a whole is a slog, requiring great discipline to get through without checking your phone.  The camera will hold on shots for an extended period without purpose, making the movie much longer than necessary.

Hostiles is one of those instances in film where the movie wants the viewer to get lost in the meditation-like feel of the entire experience even though there isn’t much to grasp.  Many great films are deliberate in their slow pace.  Their slower speed allows the audience to get a better sense for the characters and themes.  But, as the scenes are structured, there’s nothing that’s intellectually challenging to Hostiles.  You notice the purpose of each scene very quickly, leaving you to wait for the movie to catch up to you.

The vistas and the performances are starkly beautiful.  But, when every character barely speaks over a mumble, the film becomes less intoxicating and more infuriating.  Hostiles works so hard to keep characters emotionally detached that it’s it becomes difficult to stay invested in their struggles.  You’re left to take in the atmosphere of it all which quickly becomes less than enthralling as you’re constantly subjected to it without much change to the formula. 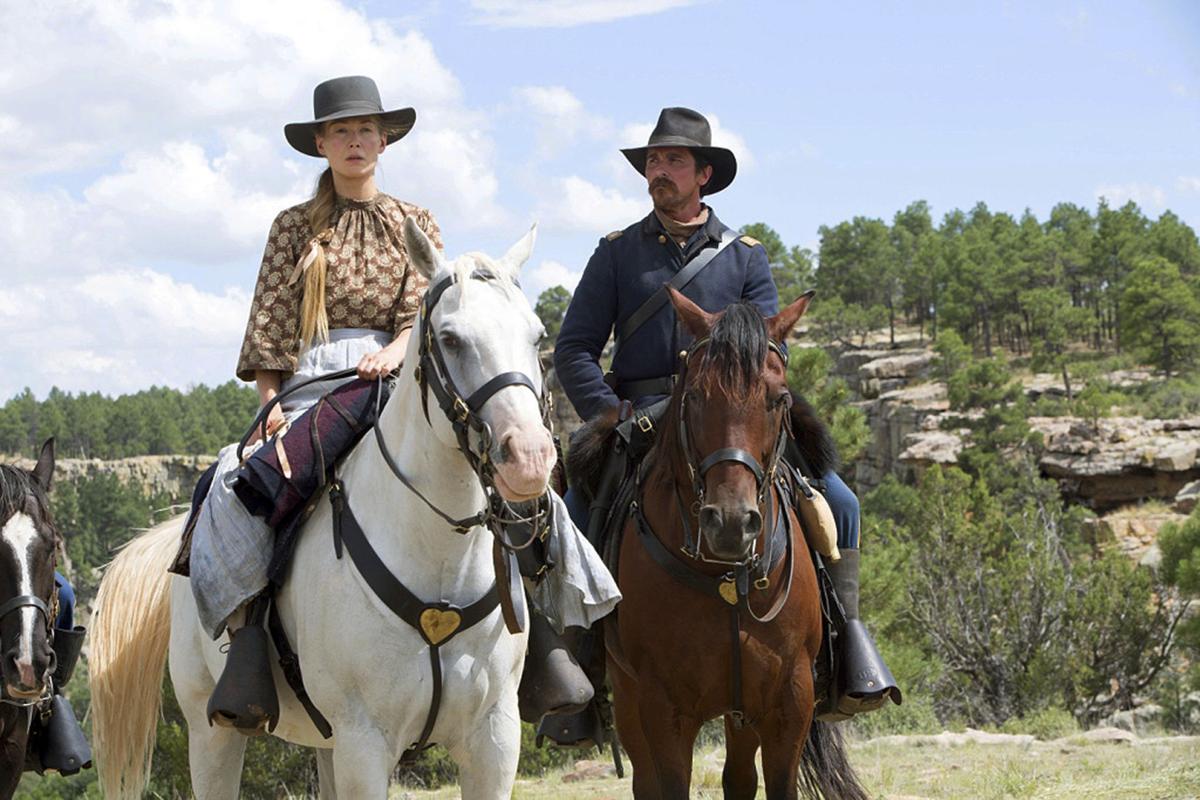 Hostiles Wants to Appear Important, But it Has Nothing New to Say

As a lover of film, I would happily forgive an unnecessarily slow pace if it was in service to rich themes that would stay with the viewer long after the movie is over.  Sadly, Hostiles is just more of the same.

There’s nothing new about a story of Native Americans and Caucasians learning to respect each other.  To the movie’s defense, there aren’t many completely new premises these days.  So, to stand out, a film must add little twists to the formula and make the journey itself compelling enough to make up for that sense of familiarity.  The failure to accomplish that task is precisely Hostiles’ problem.

Hostiles works with ingrained archetypes and repeated plot points.  Wes Studi is great as an aging Chief, but his character is relegated to the typical sage that speaks of finding “strength in the Earth” — if he even speaks at all.  With moments like these, Hostiles becomes a movie that is difficult to discuss at length in that nothing about it is remarkable or distinctive.  You’ve seen this movie before.  Ultimately, it comes down to whether or not the performances and cinematography overcome the slow pace and obvious themes.  For many, these elements will be more than enough to claim Hostiles as a solid film.  Unfortunately, I can’t bring myself to join that group.

image via Cowboys and Indians Magazine

It certainly boasts some great performances and a haunting backdrop, but Hostiles is too hollow from a thematic standpoint to work in the manner that director Scott Cooper intended.

As to be expected, Christian Bale is fantastic in the lead role, providing all the emotion that Hostiles has to offer.  In fact, his performance along with the efforts of a talented cast will be enough for many audiences members to call the film “great.”  However, Hostiles’ pacing doesn’t justify its rote message that offers nothing new.  Instead, you know exactly where Hostiles is headed — and you wait too long for the film to get there.

Thanks for reading!  What are your thoughts on Hostiles?  Comment down below!

Looks pretty, but I’m hesitant to commit to it, fearing it might turn preachy. Preachy is bad, slow, boring preachy is unbearable.

I wouldn’t necessarily say it becomes preachy, but it’s the same messages you’ve seen from this subject material before and it’s not nearly enthralling enough to justify its pace and length

Yup pretty much! You know where the movie is headed and you just have to wait for it to catch up to your thought process.

Excellent review. I’m surprised by the ‘C’ grade – I was quite impressed by the trailer, and of course Bale’s always a joy to watch. I tend to enjoy slow burners, too. Looking forward to seeing it and comparing grades :)

Absolutely! I hope you enjoy it!