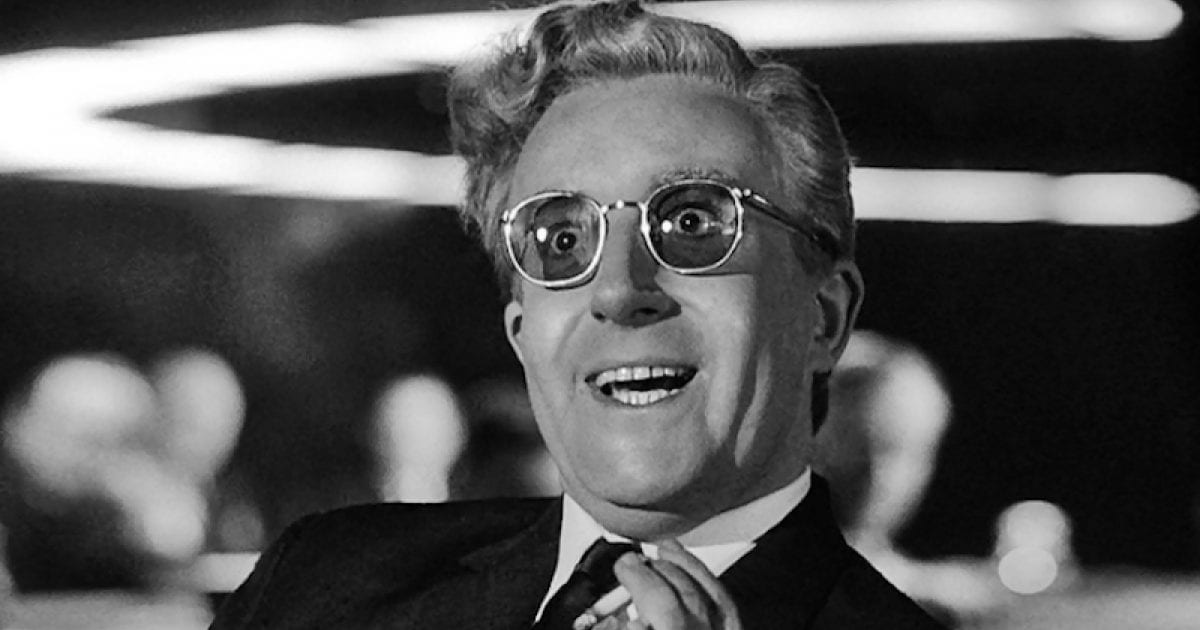 It’s overwhelming to watch as corruption consumes various governments around the world. Not to mention the fact that more than one country has nuclear weapons pointed at their arch-enemy.

So, with all the chaos in politics right now, sometimes it’s nice to be able to laugh about some aspect of it. Whether slapstick or high-brow, political comedies always seem to bring that fun, satirized humor. Though it may seem morbid to laugh at this crazy world we live in, we have to laugh at something, right?

“The only way to get through life is to laugh your way through it. You either have to laugh or cry. I prefer to laugh. Crying gives me a headache.”
― Marjorie Pay Hinckley

That particular line is uttered during the president’s rap in a television appearance. Need I say more about what a masterpiece this movie is? Starring Warren Beatty as the disillusioned president who hires a hitman to kill him and essentially says “screw it” to the presidency, this movie basically reflects the mood of most people to the government right now. The only weird thing about this movie (other than Warren Beatty terribly rapping), is the relationship between 61-year-old Beatty and 32-year-old Halle Berry. Watch out for supporting performances from political movie alumni Joshua Malina and Oliver Platt — their reactions to their slowly worsening president are priceless.

This is definitely more slapstick comedy than the rest of the films on this list and its humor isn’t exactly modern, but it’s still hilarious. Duck Soup is a political comedy about a president/dictator (Groucho Marx) of a bankrupt country who declares war on a neighboring country over the love of a woman. It stars the Marx Brothers, so it includes one-liners such as:

“You know, you haven’t stopped talking since I came here? You must have been vaccinated with a phonograph needle.”

“I’ll see my lawyer about this as soon as he graduates from law school!”

“I wanted to get a writ of habeas corpus, but I should have gotten a-rid of you instead.”

“Don’t look now, but there’s one man too many in this room, and I think it’s you.”

Despite the cheesy stand-up humor, it’s a great movie poking fun at politics and all the enjoyable corruption that comes with it.

Image via Museum of the Moving Image

Honestly, this is probably one of the stupidest movies I’ve ever seen in my life, but it’s also really funny. The premise is that the President (Alan Alda) follows the advice of his evil cabinet member (Kevin Pollak) to up his approval ratings: vilify Canada and wage war against them. We also follow the adventure of four patriotic Americans — played by John Candy, Rhea Perlman, Kevin J. O’Connor, and Bill Nunn — who eagerly consume this propaganda and travel to Canada to wreak havoc upon its unbelievably kind citizens (including unspeakable acts such as littering and disabling a power grid). It also features cameos from comedic actors Jim Belushi and Dan Aykroyd. It’s light on actual politics and heavy on comedy, which makes it perfect for a good laugh.

Robert De Niro, Dustin Hoffman, and Anne Heche may just have you questioning everything you know about politics. What’s real and what’s just made up to distract the public? How many of our military conflicts have been real and how many have been manufactured? Is America even real? Okay, I exaggerated that last part. Wag the Dog is about how a political spin doctor (De Niro) and Hollywood producer (Hoffman) combine to falsify a war with Albania to cover up a presidential scandal (much like Canadian Bacon). Like every good political satire, it has rapid-fire dialogue and lots of subtle jokes that make it an amusing watch. And always remember: “The war of the future is nuclear terrorism.”

This movie incorporates the brilliance of Aaron Sorkin’s writing and the acting charms of Michael Douglas and Annette Bening to create a heartwarming and also quite funny film. The rapid dialogue is reminiscent of classic Hollywood screwball comedies, only with less emphasis on physical gags. The romance between U.S. President Andrew Shepherd and lobbyist Sydney Wade is both awkward enough to be believable and adorable enough to be coveted, making it a classic for date night or just for fun. It also stars veteran actor Martin Sheen as the wise chief of staff guiding the president through juggling his presidency and love life.

My Fellow Americans gives off a distinctive Grumpy Old Men (1993) vibe, mostly because it stars two grumpy old classic Hollywood actors — Jack Lemmon and James Garner — who are feuding. It’s mainly a slapstick comedy with lots of crude humor mixed in, but it’s still hilarious. My Fellow Americans has a great comedic cast: Dan Aykroyd, John Heard, Wilford Brimley, Lauren Bacall, and Bradley Whitford all costar. Join these two old guys on their journey across America to expose the current corrupt president while trading hilarious barbs along the way and running into the kookiest situations. 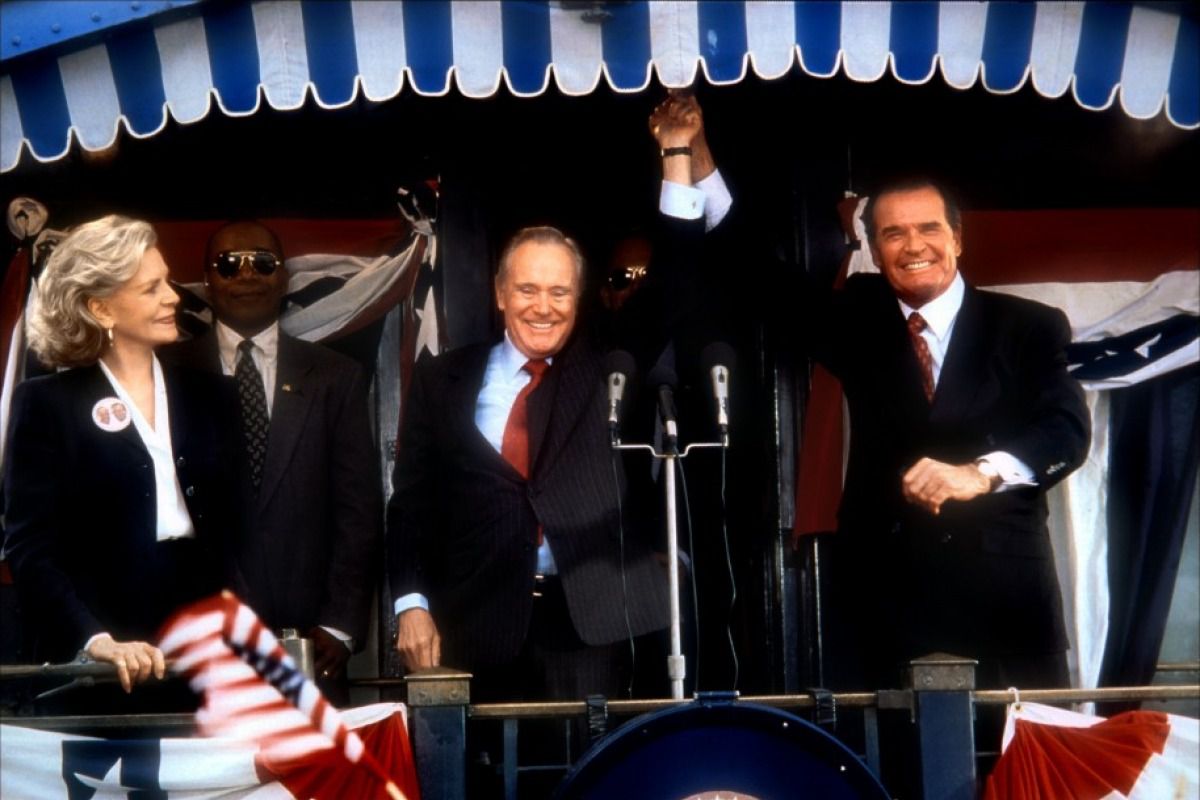 I didn’t know I wanted Robin Williams as a politician until now. Man of the Year is the story of a comedian who hosts a news satire program, makes a run for president, and, through a miraculous computer malfunction, wins. Williams and Laura Linney have great chemistry and Christopher Walken, Lewis Black, and other various SNL members–Tina Fey, Amy Poehler–give excellent supporting performances. If you enjoy the biting satirical wit of Stephen Colbert or John Oliver, you’ll absolutely love Man of the Year. Plus, Robin Williams is always the best part of any movie.

On a personal note: this is one of my favorite feel-good movies. Yeah, it’s not very realistic (he somehow balances the budget and gets people to cooperate in government) but it really restores my faith in people and our country. Kevin Kline stars alongside Sigourney Weaver in this comedy about a presidential impersonator chosen to act as the president while the real president recovers from a stroke. It also includes the talent of Frank Langella, who stars as a corrupt chief of staff (a role well-suited to him as he’s no stranger to playing corrupt politicians). If you ever have a bad day and are sick of watching CNN, I highly suggest watching Dave.

“Gentlemen, you can’t fight in here. This is the War Room!”

“Gee, I wish we had one of them doomsday machines.”

Dr. Strangelove is such a fantastic example of political satire. It uses its dark brand of comedy to poke fun at the Cold War and worldwide annihilation. Who knew you could make fun of your imminent death? Starring Peter Sellers (playing three different people), George C. Scott, and, of course, Slim Pickens, Dr. Strangelove tells the story of how a room full of politicians and generals couldn’t stop one crazy general from making a bad decision. This bad decision triggers the Soviets to bring out their “Doomsday Machine,” which massacres the entire world’s population if a nuclear attack hits the USSR. It’s goofy to the point of madness, but it’s definitely great for all you nihilists out there laughing at the political storm we face today.

You can’t go wrong with Charlie Chaplin. This movie earns its place as number one not only because it’s funny but because of how bold it is. This movie came out during World War II — the same time Hitler, Mussolini, and Stalin were massacring millions of people. Charlie Chaplin definitely had more fortitude than most people. From the famous speech to the physical gags to just the overtly sarcastic dialogue, it’s a great example of satire. If you want a near-perfect political comedy, look no further than The Great Dictator. 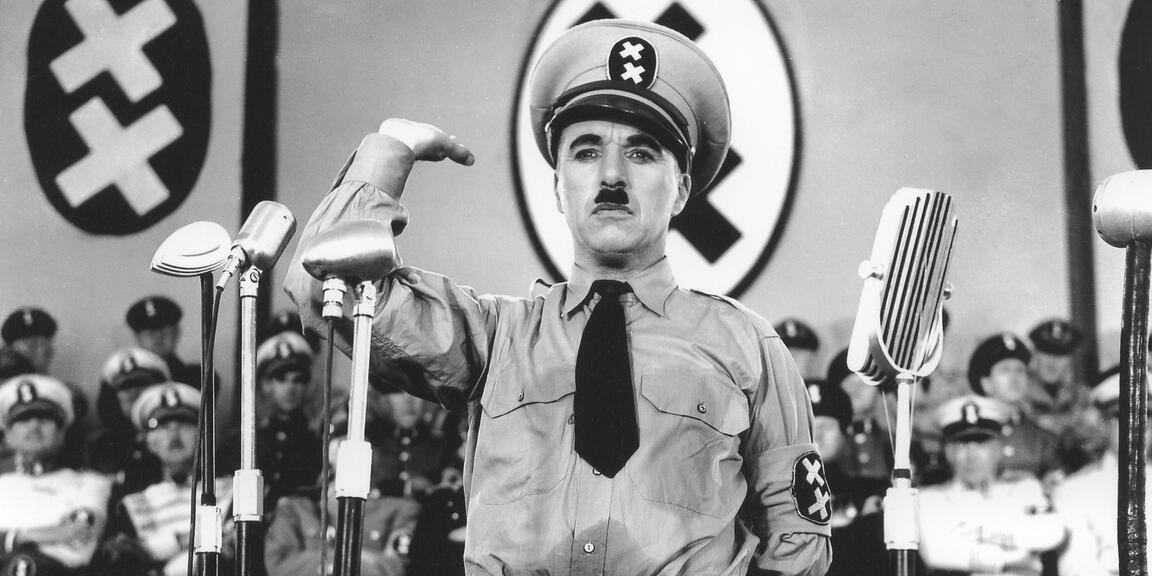 Thanks for reading!  What are your favorite political comedies? Any that we missed?  Comment down below!

[…] Christopher Walken — the man who’s spawned a thousand impressions with his unique Queens accent. Unlike many actors and actresses, he’s managed to stay pretty relevant throughout his career. He initially took off with his role as Nick in The Deer Hunter (1978) and as Duane Hall in Annie Hall (1977). Since then, he’s been in classics and blockbusters like Catch Me If You Can (2002), Hairspray (2007), and Pulp Fiction (1994). Most recently, he has lent his voice to King Louie in The Jungle Book (2016) and the comedic role of Dr. Walter Tinkler in Father Figures (2017). However, my favorite performance of his is will always be in this particular Fatboy Slim music video: […]

[…] the ashes of the Soviet Union, Russia was looking for a makeover, ditching socialism in exchange for capitalism. It was supposed to signify a rebirth of sorts, a turning of the page […]

I’ll have to check that one out!

Thanks! Glad you liked it ?

I would have expected nothing less than The Great Dictator being #1.