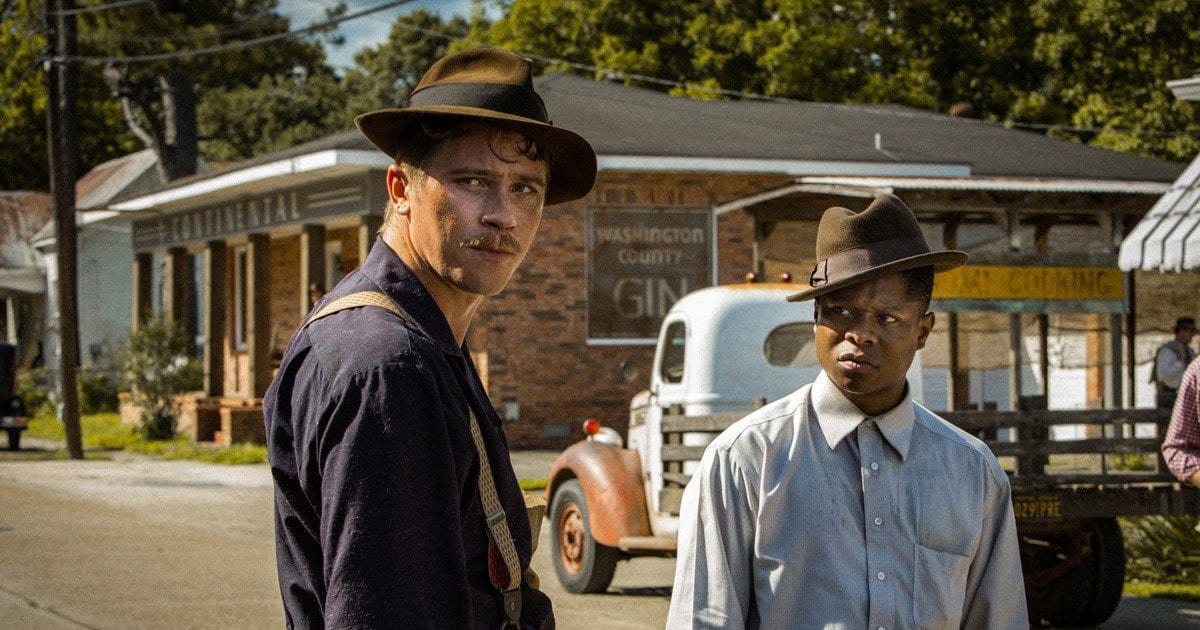 In an attempt to make some noise at the Oscars in a few months, Netflix purchased a film that seems primed to be a powerful, resonant piece of art, especially in today’s cultural climate.  Dee Rees’ Mudbound is the next step for Netflix in becoming a majorly reputable studio not only within the television spectrum, but also in the film industry.  The following review will be spoiler free. 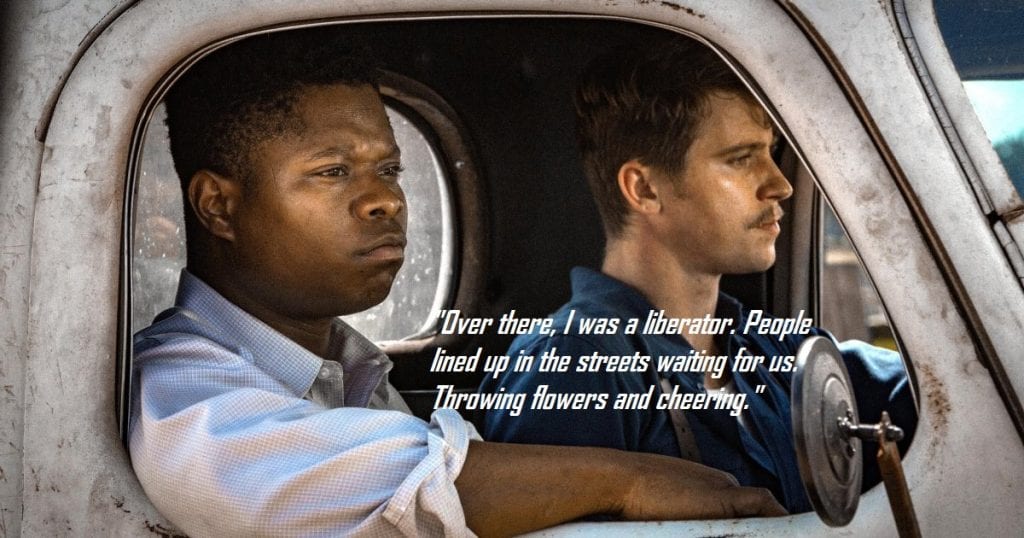 Set in Mississippi during the first world war, the McAllan family and the Jackson family are doing their very best to survive as farmers under different circumstances.  The McAllans are unprepared to work as farmers, leaving wife Laura (Mulligan) to lose faith in her husband’s (Clarke) dreams.  The Jacksons suffer mightily from social barriers in place as African-Americans during the heat of the Jim Crow laws.  However, the relationship between Jamie McAllan (Hedlund) and Ronsel Jackson (Mitchell) that grows after they return home from the war challenges the dynamics of each family, and race relations in the area.

As I’ve mentioned many times before in other articles, Netflix is working towards becoming a major player in the film industry to combine with its dominance in television.  The company has slowly moved away from lesser projects such as each of the Adam Sandler comedies into others that come from the efforts of a singular artistic vision.  Funny enough, The Meyerowitz Stories (New and Selected) starring Adam Sandler is where a noticeable shift took place.  Combined with other recent projects like Gerald’s Game, 1922, and First They Killed My Father in the last few months, Netflix has clearly changed its vision for its original films.

And now, we have Mudbound, a film that Netflix outbid companies like A24 and Annapurna to obtain its distribution rights at Sundance earlier this year.  As it became clear that Mudbound was going to be a critical hit, many have started to wonder if Netflix will put enough financing into an Oscar campaign.  The film is simultaneously releasing in theaters this weekend in New York and LA, making it eligible for awards consideration.  If Mudbound gains traction, we might have a major shift in the industry in the near future. By far the most fascinating content within Mudbound comes from a friendship that grows between Jason Mitchell and Garrett Hedlund’s characters.  The two men return from war to an area that feels foreign to their sensibilities that grew over time overseas.  They both feel a bit out of place, gravitating towards each other just to find a commonality in each of their lives.  Director/writer Dee Rees adds so many layers to this relationship, making it so much more than a cheap union that has to occur just for the central theme of the movie to shine through.

These men create a bond that is simple, yet it carries so much weight.  You won’t find these two characters professing their respect for one another.  But, you feel it grow with every conversation that the two have together.  Their interactions are by far the most interesting and impactful in the film.

Without having to express it blatantly, Dee Rees provides two equals that allow Mudbound‘s themes to become abundantly clear. An Important Social Discussion that is Unbelievably Thoughtful and Timely

As whole, Mudbound offers a fascinating discussion that diverts from the usual involving race relations in film.  Though still equally impactful, other films rely on grotesque violence to power the story’s themes of equality.  Although there’s certainly some horrible imagery to see here, Mudbound largely focuses on the day-to-day relationships of the Jim Crow era to fuel its discussion. Mudbound is incredibly subdued and thoughtful in this way.  The film weaves together the idea of the facelessness of war and how that pertains to society in a way that can only be described as impressive.

The movie relishes in providing quieter moments that are equally impactful as the over-the-top gestures we’ve seen recently.  There’s something to learn in every little detail.  A strong cast certainly helps this feat.  There isn’t a weak performance in the entire cast, allowing for a subdued discussion to work mightily.  As a whole, Mudbound might not make you grimace, but it’ll still provoke intense thought. 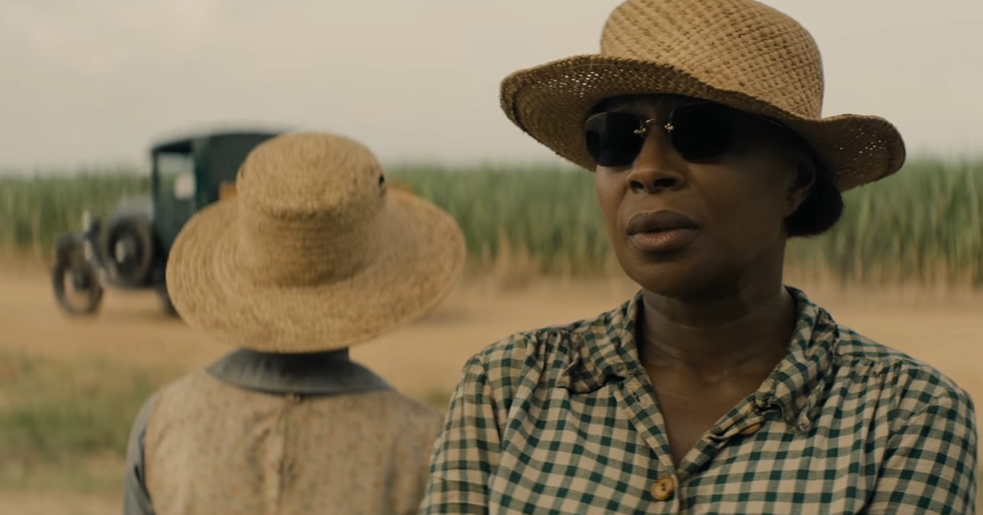 There’s a lot of greatness in Mudbound, but sometimes the film itself doesn’t focus on the correct details.  The film is built on different relationships, almost acting as vignettes that are woven together.  All of these relationships serve a purpose, but you can’t help but feel that some of them are a tad lacking in terms of dramatic heft.

As mentioned above, the relationship between Garrett Hedlund and Jason Mitchell is the highlight.  But, Mudbound can feel a tad unfocused, shifting towards other developments that aren’t as satisfying.  At times, you struggle to decipher who exactly is the main character.  For this style to work, every single element of the film needs to enthrall the audience.  Otherwise, they might just tune out until the more interesting pieces show themselves again.

As such, Mudbound can be classified as a bit tedious at times.  The entire endeavor is certainly worthwhile.  However, you can’t help but feel as if there could have been even more emotion to behold. Mudbound is a tad tedious at times, diverting away from the most impactful story at its core.  But, that core relationship between Garrett Hedlund and Jason Mitchell’s characters is so strong that it largely makes up for any issues that the film contains.  In today’s social climate, Mudbound is one of the most important films that is currently being circulated.  It gets an A-.  It’s final few moments rank among the most powerful scenes of the year, placing a lovely bow on what already was a lovely motion picture.

If Netflix puts enough financing into pushing for an awards season run, Mudbound might just walk away with a few golden trophies come early March of next year.

Thanks for reading!  What are your thoughts on Mudbound?  Comment down below!

[…] is no air horn of oppression or a visualization of the plight of the African-American in modern American culture. Rather, there […]

[…] Carey Mulligan stars in this film as Cassandra. In a brilliant opening scene, we see her in a bar having had too much to drink and struggling to even keep her eyes open. A group of three men looks on in a manner that immediately implies menace. One of the men (played by Adam Brody) approaches the heavily intoxicated Cassandra and offers to get her a cab so she can get back to the safety of her home. Naturally, he has different motives and they end up back in his apartment where he attempts to take advantage of her. Little does he know, Cassandra has had the upper hand in this situation from the moment he approached her in the bar. […]

Glad you enjoyed it!!!

This one goes on the yes list, thanks for the review!