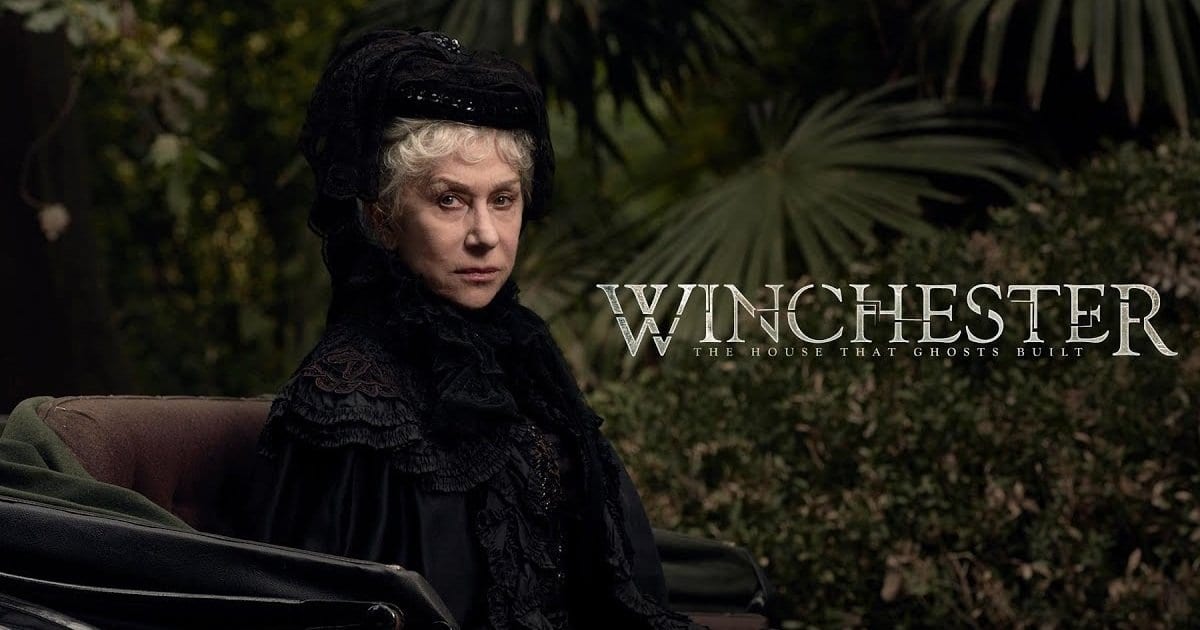 Hollywood is no stranger to fudging real life events to create a horror film.  We’ve seen it with The Conjuring Universe and countless other projects throughout the years.  Now, Lionsgate and CBS Films have turned to the mystery behind the Winchester house for a film that seems to have some prestige with the addition of Helen Mirren to the cast.  The following review will be spoiler free. 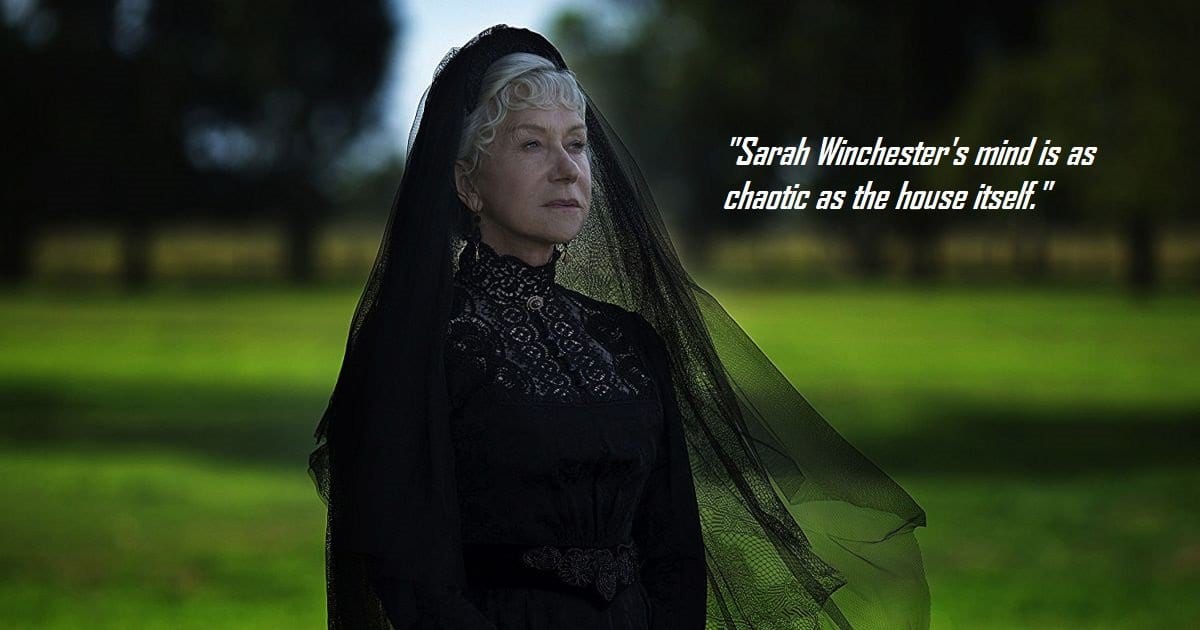 Although Sarah Winchester (Mirren) is the majority owner of Winchester Repeating Arms, other members of the board feel that she is unfit to run the company given her state of mind.  In order to prove her instability, board members send Dr. Eric Price (Clarke) to begin psychological testing.

Upon arriving at the Winchester estate, Price learns quickly that the house is under construction at all hours with zero rhyme or reason to the style.  As Eric and Sarah begin to interact more often, it becomes apparent that Winchester can communicate with spirits that have been killed by one of her company’s rifles.  But, those spirits are growing stronger by the second as Winchester struggles to keep them at bay.

After the Winchester house’s initial construction in 1883, it was said that there was constant construction without interruption until Sarah Winchester died on September 5th, 1922.  Naturally, the construction ended right after her death.

That’s the story that helps to sell tickets for a movie.  But, Winchester’s biographer actually noted that Sarah Winchester dismissed workers for months at a time for rest.

Obviously, there’s something off about the house.  I mean, what person in the right frame of mind makes a house that was seven stories with doors that lead to nowhere?  This discussion isn’t meant to thwart the existence of ghosts, but all the relevant information must be considered when a film slaps the “inspired by true events” tagline onto its marketing material.  Executives look to use that phrase with every horror movie, hoping that it causes an increase in ticket sales.  However, these “events” boil down to one person hearing a noise in most cases.  If you ask me, horror should just focus on creating tense scenes with a chilling emotional core.

Winchester Does its Best to Inject Some Heart into the Story

Similar to Insidious: The Last Key which released in January, Winchester isn’t a good movie, but it does its best to offer some heart which keeps the film from becoming truly wasteful and generic.

Jason Clarke’s character isn’t exactly the strongest you’ll see this year, but his presence as an actor should keep audiences moderately invested as spirits become more apparent in the house.  One could argue that Helen Mirren’s involvement is a tad wasted, but the fact that she’s a main character in this story adds a certain validity to it that would not be there otherwise.

Here lies the benefit of hiring great actors for your project: things might be a mess around them, but they evoke a sense of true emotion from their tawdry surroundings.  It’s difficult to truly bash Winchester because the core of the story is far from cynical.  As certain revelations come to light, it’s clear that the Spierig Brothers worked to make a cohesive story that relies on the tortured pasts of these characters.  In that respect, Winchester feels fairly genuine.

That being said, it’s also difficult for this movie to receive too much credit due to its complete reliance on jump scares.  One could go as far as saying that there isn’t any scary elements in Winchester.  Every potentially scary moment is told through obvious and annoying jump scares.  The movie contains the worst type of jump scares that are telegraphed to an almost absurd degree.  They all have completely generic setups, undercutting the shock value of it all.  In fact, it’s difficult to call these jump scares by that moniker in that they won’t make you jump.  You see them coming from a mile away, leading to an involuntary brace of the body that keeps you from being startled.  Just for fun, Winchester sprinkles in some fake-out jump scares just for the hell of it.  As you can imagine, they are equally ineffective.

Winchester‘s overreliance on jump scares becomes even worse in that these horrible images are only visible for a nanosecond.  The movie doesn’t leverage its jump scares into an extended horror sequence, leaving you with nothing to fear.  Winchester will never raise your heart rate, allowing for a feeling of apathy to take over.

This film fits squarely into the categorization as a movie with wasted potential.  With a great cast and an odd setting, there are certainly the makings of a solid horror flick.  However, the Spierig Brothers failed to add any personality, making it feel like many other horror films.

The film certainly has a great setting, but the location is shot without a sense of dynamism that it only adds to the feeling of apathy that slowly builds inside each audience member as the story progresses.  From a filmmaker’s perspective, when most of your story involves people slowly walking through a creaky house with limited (if any) scary visual elements, you need something intriguing to look at to keep your attention.  As you might expect from the tone of this review, that necessary piece is not prevalent in Winchester.

As the story drags and the pacing comes to a halt, the reveals and twists of Winchester‘s narrative just don’t work as well as they should.  With nothing else to keep your attention, it’s very likely that you’ll start guessing these reveals with a high level of correctness.  You’ll find yourself becoming antsy as you wait for the end of the film to come.

image via Why So Blu?

Winchester will undoubtedly become an easy target of derision for critics and people who claim to have seen it since its Rotten Tomatoes score is so low.  However, there are redeeming qualities in the film.  With a solid cast in an intriguing setting, this horror film can be somewhat entertaining for big horror fans that look to support any film in the genre.

However, the movie just doesn’t quite come together.  Without a single true scare and a workmanlike execution to its premise, Winchester is difficult to fully recommend on any level.

Thanks for reading!  What are your thoughts on Winchester?  Comment down below!

Awesome and reviews are cool! Looking forward for more collection of movie reviews!

I grew up in what is now referred to as ‘Silicon Valley,’ and toured the Winchester Mystery House a few times while in my early 20s. It’s surrounded by movie theaters and a shopping center, and I remember how eerie it looked on the dark, cloudy day I came out of the theater just having seen “The Exorcist.” The house is sprawling and odd, but there’s really nothing scary about it.

It seems to me that “Winchester” would have been a better film had it more fully explored Sarah Winchester’s life story instead of trying to be a horror film – like you said, fudging real life events to create ‘horror’ where it never really existed other than in her head.

That might have been interesting too! But I also think this movie could have worked with the same premise. There just wasn’t anything of note to it. I feel like if it was directed by someone like James Wan or some other comtemporary horror director it would have worked very nicely!