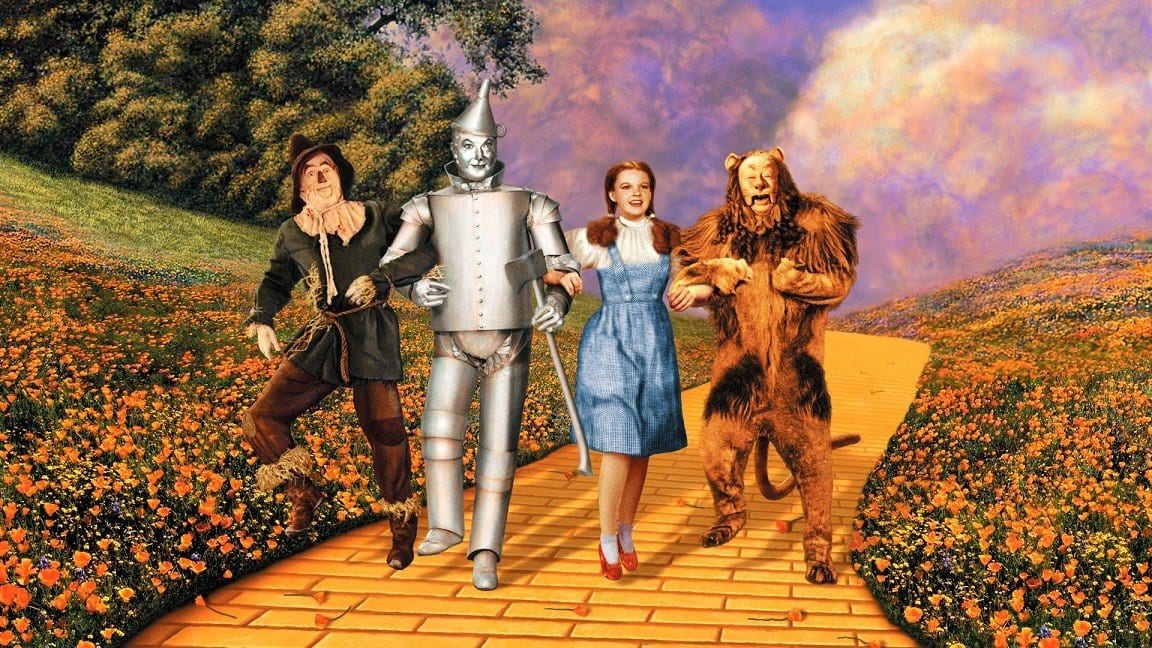 A great example of a spot-on piece of truly aesthetic cinematic art is The Wizard of Oz (1939).  It was directed by Victor Fleming, the same director who brought Margaret Mitchell’s novel Gone with the Wind to life on the screen.  The Wizard of Oz is one of numerous Hollywood films adapted from novels. It is considered a masterpiece by many.  This motion picture is a musical.  It is a lighthearted comedy.  But most of all, it is a beloved fairyland tale.  The article may go into some plot points, so be aware!

Directed By: Victor Fleming and four other uncredited directors

The Wizard of Oz is a popular and well-known work through the novels, the films, and the countless retellings of the original story in live play performances.  The original 1939 movie itself, though perhaps dated, is a classic for all time.  It is about Dorothy, a girl who runs away from home.  But, changing her mind, goes back.  Upon returning in the middle of a terrible storm she enters her house, and before she knows it she’s in Oz.  Dorothy has the adventure of a lifetime.  She endures danger after danger to try to return home.

Interestingly enough, the books, as well as the film, include some subtle yet fairly obvious atheistic agenda.  One example of this can be seen when Dorothy queries a man at the Emerald City that if no one has ever seen the Wizard, how do they know he is even real.  It is unfortunate that so much pop culture is slanted in various ways.  Despite that, this remains a delightful little story.  The Wizard of Oz actually has some similarities to Alice in Wonderland and other stories of the same mythical genre.

The Wizard of Oz relates to a daydreaming girl inexplicably finding herself in an enchanted world hosting a mixture of pleasure as well as dread. For Alice in Wonderland, the dread is that of the moody Queen of Hearts.  For Dorothy of Oz, it is the Wicked Witch of the West. Like any imaginary land, Oz is a colorful one full of beautiful places like castles and mountains and strange characters like the Munchkins and the talking trees. The Film’s History and Influence

Since its release over 70 years ago, The Wizard of Oz has been re-released on several occasions.  This has resulted in a significant amount of research being done on the history of its making. Fans of the film have a vast trove of trivia facts which they hold dear.  These include tidbits such as Judy Garland was 16 when the movie was filmed and that because of the lighting needed for the colorizing process set temperatures were frequently above 100 degrees.  The movie is just as much a Hollywood classic as King Kong.  Thus, it has been referenced in more recent films like Rocketman (1997), Diary of a Wimpy Kid (2010), Wreck-It Ralph (2012), and The Avengers (2012).

After killing one wicked witch upon her dramatic entrance into Oz, Dorothy (Judy Garland) is directed to go to the Wizard of Oz (Frank Morgan) for advice via the Yellow Brick Road. On the way, Dorothy, being the kind-hearted person she is, offers to several unique individuals her companionship and the possibility that the Wizard might help them with all of their defects.  After quite a few encounters with the Witch, Dorothy and her party make it to the Emerald City, but not without first crossing a large field of poppies. 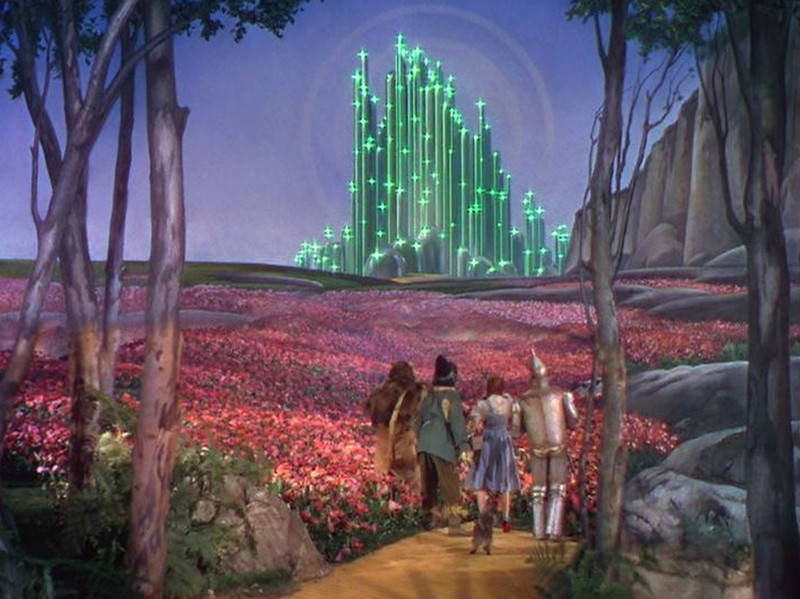 This fact could explain the following sequence in which the horse in the city keeps changing colors.  Poppy flowers are used to make drugs such as morphine, codeine, and heroin.  The poppies have one visible effect on Dorothy and the Cowardly Lion before reaching the city: drowsiness.  Products derived from some poppy flowers can slow down body functions; they can also cause hallucinations.  A horse changing color to various bright hues every five seconds would probably be a pretty sound example of a hallucination.  The idea that Dorothy and the others are high perhaps brings a hidden tone of comic relief.  After all, the Witch used the poppies to stop them dead in their tracks. And instead, they took a trip.

It is a beautiful and daring picture with a story and place which is nice to revisit. Nearly everything about it makes it has helped make it an instant and enduring classic. Dorothy’s singing of “Over the Rainbow” is uplifting; the scene is not stationary. The camera moves with the music. The distant tornado is pretty daunting. The transformation of Miss Gulch into the Wicked Witch is very well done.

The transformation from monochrome to color was deceptively well pulled off.  And once colorized, the movie makers went to extremes to bring vibrant colors to the scenery such as the green-skinned witch, the Yellow Brick Road, the color changing horse, and the puffs of orange smoke which appear when the witch vanishes.  The coordination of the singing and choreography were splendid as were the performances of the musical talent, especially when the smoke musically toots out of the top of the Tin Man’s head during his solo.  It all has a very natural flow about it. Film is an art which incorporates nearly every other expressive form.  Actors, decorators, lighting specialists, painters, audio technicians, musicians, writers, make-up artists, special effects coordinators, directors: they all play a part in the making of the “big picture,” the motion picture.  All of the people that helped make this particular film and the passion they put into it really shows, and it was definitely worth it.  They accomplished a great feat.  The Wizard of Oz remains a cinematic masterpiece in so many ways.

Thanks for reading!  What are your thoughts on The Wizard of Oz?  Comment down below!

As a kid it was the most terrifying yet enthralling movie I could imagine.

Nice job bringing light into an old corner of cinematography! Really makes me want to go and watch it again. Been a few years.

‘The Wizard of Oz’ always has been, and always will be, my all-time favorite film.

I really enjoyed this review.Loved this movie/film and the book. However, didn’t care for the last adaptation. I know this may surprise you but this could be used as an example bullying and what you shouldn’t do. This was an incredible review. Would like to see a review on the last adaptation of The Wizard of Oz compared to the one in 1939. Just a suggestion. Shared on https://daisymae2017.wordpress.com .

I’ll have to take a look!

It was on tv at one time and I just liked the original much better.

I would appreciate it that. love to see comparison.

I completely agree, what a classic movie it is! By that time standards, it is so advanced and so well-made. It is a pleasure watching, even in the 21st century.

I really enjoyed reading this review. The Wizard of Oz will always be one of my favourite films. The use of technicolor is something that truly dominated the screen and it will always be a prime example of the spectacle of the classical Hollywood era. Even though the film is approaching it’s 80th anniversary and it seems everyone knows everything good and bad about the film and the production of it, one thing I didn’t know is that the film is a book adaptation so that was really interesting for me to discover!

I enjoyed this review too! Congrats to John for writing his first article on MovieBabble!

I’m really glad you liked it!