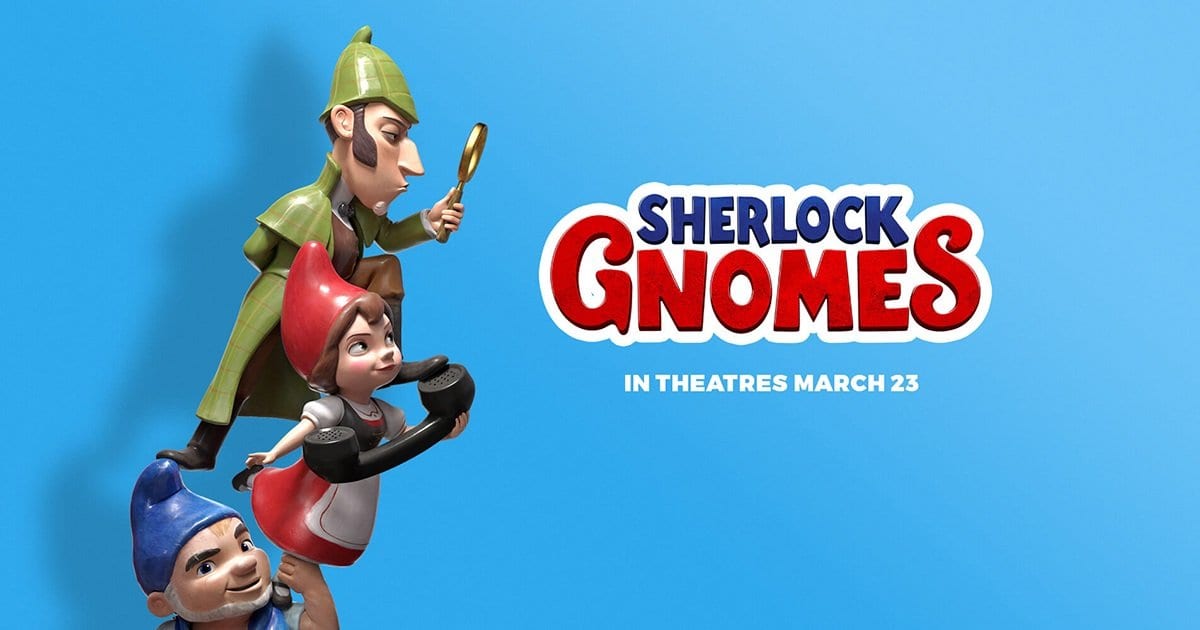 Everyone’s most anticipated movie of 2018 is finally in theaters: Sherlock Gnomes!  The belated sequel to the forgotten Gnomeo and Juliet continues the story of the gnome version of the Shakespearean forbidden lovers.  This time, however, the beloved detective Sherlock Holmes is also getting the gnome treatment.  The following review will be spoiler free. 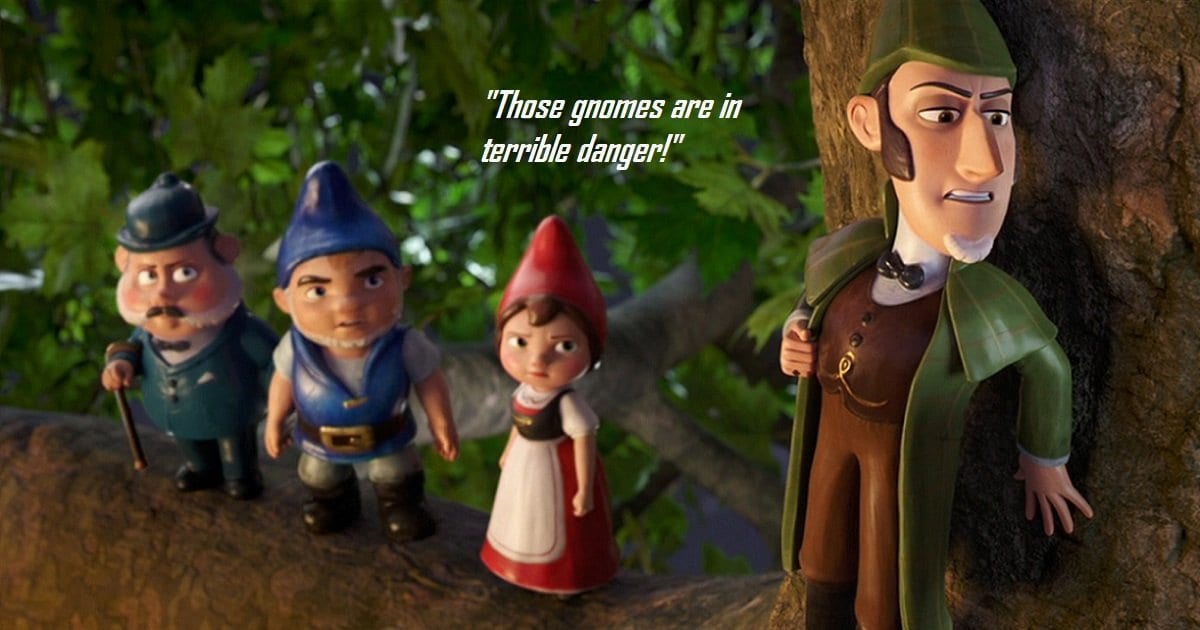 Upon arriving in their new town, Gnomeo and Juliet are unsure of how to clean up their new garden in preparation for spring.  However, word quickly spreads that someone is kidnapping gnomes all over town, putting everyone on edge.

When Gnomeo and Juliet return to the garden to find that everyone is missing, they panic, fearing what might have happened to their friends.  Luckily, Sherlock Gnomes and his sidekick Watson are there to help, dragging the couple through town as they discover more clues regarding the gnomes’ whereabouts.

Back in 2011, a little film by the name of Gnomeo and Juliet released into theaters, earning a solid $194 million on a $36 million budget.  Shortly afterwards, most people forgot that the film ever existed.

Strangely enough, Paramount and MGM became fascinated with the gnome property that Disney and Touchstone Pictures had developed, obtaining the creative rights to continue on with the property.  Paramount got to work on Sherlock Gnomes quickly, signing on writers and a director back in 2012.  However, the film went through a series of development issues, including a few rewrites.  Casting wasn’t even announced until 2015 when word spread that Johnny Depp was signing on in the titular role.  And now, after another three years of work — including another last-minute delay from January 12th, 2018 to March 23rd, 2018 — the sequel to a film that left the public consciousness years ago is now here…and the first piece of promotional material showed a gnome in a mankini twerking and also farting in a mud pit.  True greatness takes time, I suppose.

There’s a Bit of Mystery and Absurdity to Enjoy

Thankfully, Paramount was wise enough to remove gnome butts and farts from the actual movie (which makes one wonder if they felt that those gags would kill in the promotional material and were later shocked to discover the opposite).

The main story focuses on the mystery behind the disappearing gnomes and Sherlock Gnomes’ attempt to crack the case.  The writers are clearly enjoying themselves as they poke fun at the famous literary character, adding self-reflexive nods to the source material.  Within that brand of entertainment is a fun visual interpretation of Sherlock’s logical reasoning.

Sherlock’s nemesis leaves cryptic clues behind at the scene of the crime, forcing Sherlock to dive deep into his subconscious to solve it.  Sherlock Gnomes switches to a completely different animation style in these situations, becoming two-dimensional as well as monochromatic.  Admittedly, these moments are quite delightful, adding to the mystery of the film itself.  You get a sense that you’re solving the clues along with Sherlock, adding some level of creativity to the film.

However, those brief moments of fun fail to answer one essential question: why does this film exist?  I’m sure no one has thought of Gnomeo and Juliet since it’s release back in 2011, and Sherlock Gnomes doesn’t add anything fascinating from a storytelling point of view.

By now, it’s fairly clear this gnome franchise looks to riff off of famous literary characters for a quirky, self-reflexive adventure.  In fact, the movie begins with a few nondescript gnomes discussing various different stories to tell (“Spider-Man: Gnomecoming” being one of the more egregious as it fails to continue the literary character shtick).

The film’s only calling card is its silly premise, but the film doesn’t do enough with it for the silliness to elevate passed a mere chuckle (or facepalm, whichever you prefer).  Realistically, the only thing that Sherlock Gnomes accomplishes is provide ammunition for bored college students to create more memes in their lecture class while the professor aimlessly discusses some nebulous topic that will leave the minds of said students soon after their next exam.

It’s becoming an anomaly these days for such listless movies to come out into theaters.  Paramount shifted to new leadership early in 2017, and it’s possible that Sherlock Gnomes might be one of the last holdovers from the previous regime in terms of onscreen content.  Considering how Paramount limited the marketing material for the film, we could be looking at a tax write-off for Paramount as they attempt to deflate their earnings to join a lower corporate tax bracket. 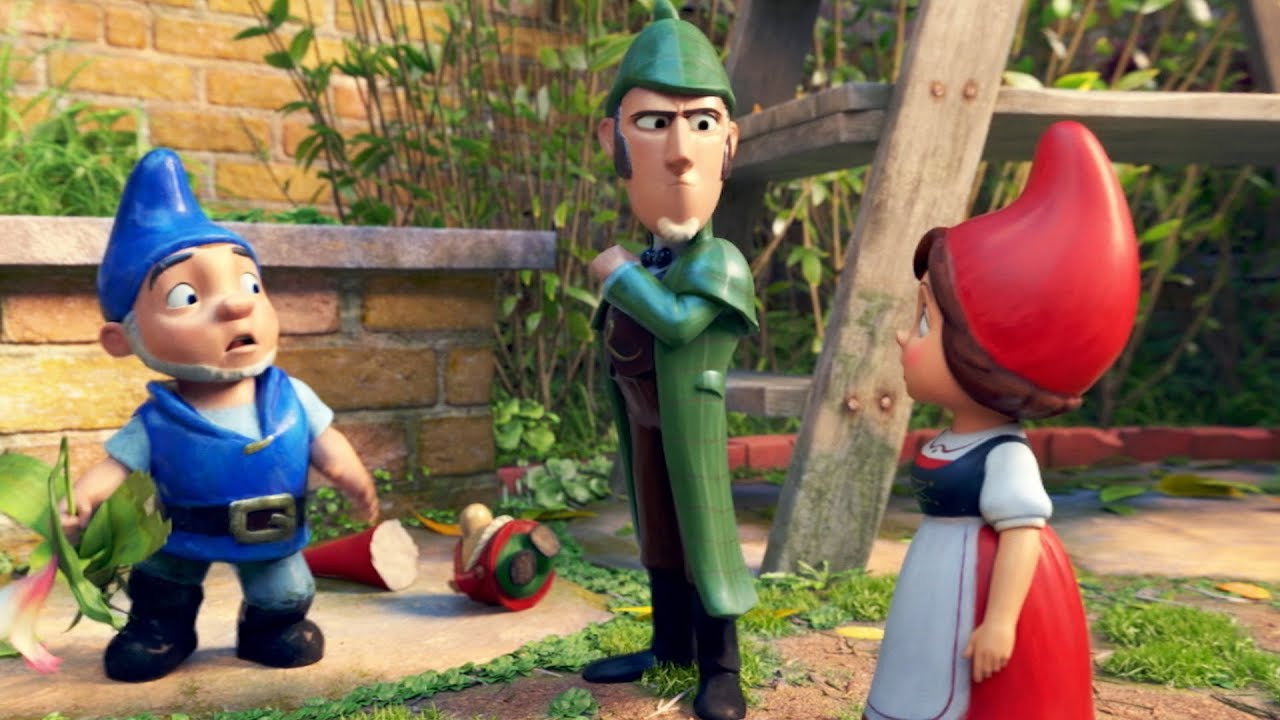 Sherlock Gnomes is Beyond Bland

With a plethora of garden gnomes, talking gargoyles, and a villain that resembles gelatin, you would think that Sherlock Gnomes would have some element that stands out.  Hell, Mary J. Blige (voicing a doll) even has an extended song and dance number that stops the film dead in its tracks.  And yet, nothing is noteworthy.

Surprisingly, Sherlock Gnomes is a difficult film to review in that sense.  It’s one of the more passive viewing experiences you’ll ever have.  It’s quick, superficial, and inoffensive in every way, working as a very generic animated film that is never close to inventive.  You watch it, then it’s over.  That’s it!  After 86 minutes, you’ll move on with your life never to return to this world full of gnomes.  If you ask me, that’s a serious waste of your time and your money.

Aggressively bland, Sherlock Gnomes isn’t the dumpster fire that many probably assumed it would become, but it does nothing to warrant its own existence.  There’s some mystery and mental deduction that adds a bit of cleverness to the endeavor.  But let’s be honest with ourselves, no one over the age of five will get much out of this film.

Sherlock Gnomes is the embodiment of mediocrity, doing absolutely nothing except acting as fuel to the fire for the ever-growing meme culture that resides on social media.

Thanks for reading!  What are your thoughts on Sherlock Gnomes?  Comment down below!

[…] he arrives with an escort he’s paid to play the part of Ashleigh. However, his mother quickly deduces the scheme, and sends her away. She confronts Gatsby and tells him he’s not to fraternize with […]

nice movie. the best movie that you can watch with your family. but i honestly didn’t think that this movie would come up in theatres.

Good review. Personally, it was just a fairly okay movie. Like you said, it was a terrible animated film, but (like Gnomeo & Juliet) it will probably faded into the background of the 2018 movie releases.

In the back of my mind I’m just hoping that it joins Shrek and Bee Movie as a new meme movie lol that would be hilarious!

Haha…yeah, that would be hilarious!

If the movie is bland an unoriginal, your review is anything “butt.” I will be sure to read more of your reviews in the future!

Lol thanks so much! I’m glad you enjoyed it!!!

I am still baffled that this is a film that came out this year. But then again when you talked about social media culture and memes there is an obvious reason as to why this exists. I am almost tempted to go out and watch this film (primarily because I am morbidly curious) but I think I will wait until it reaches Netflix eventually. I am glad there is some mystery to take from the film so it somewhat lives up to its namesake, but I honestly never though in my lifetime I would see this hit theaters. It will be up there with Boss Baby.

DEFINITELY wait unitil Netflix, it’s not worth your money!