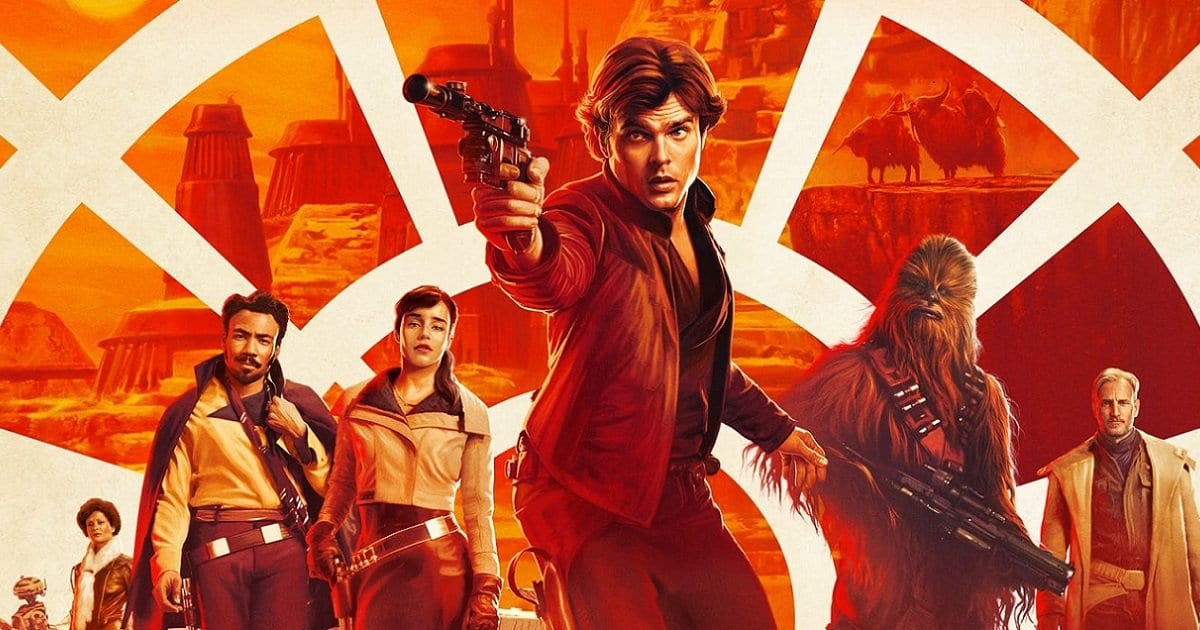 After numerous reports that hinted at trouble behind the scenes — and the more concrete news that Lucasfilm was to fire Phil Lord and Chris Miller — Solo: A Star Wars Story has finally come to theaters, but with much less fanfare than the previous Star Wars joints from Disney.  And with a bland core that doesn’t inject the vibrance need in a Han Solo origin, Solo won’t do much to change the minds of those that were dubious from the start.

As a young adult, Han (Ehrenreich) is doing whatever he can to earn his freedom with Qi’ra (Clarke) by his side, resorting to various criminal acts.  However, following a mishap that separates the two, Han quickly turns to another profession: high-stakes smuggling.  Gaining insight from Tobias Beckett (Harrelson) and his band of criminal couriers, Han becomes further entangled in a world that is full of unsavory individuals — and he’ll need some help from some new faces to get out alive.

It’s no secret that Solo: A Star Wars Story had one of the more troubled productions of recent memory.  Although many raved over what was considered one of the best Star Wars scripts ever written, Lucasfilm became increasingly frustrated with Phil Lord and Christopher Miller, the initial directors of the film.  The directing duo reportedly went off-script regularly, telling actors to improvise and divert from what was written by Lawrence Kasdan.  One anonymous source even compared the film to Ace Ventura at one point in time, also citing that lead actor Alden Ehrenreich was out of his element as a younger Han Solo and needed an acting coach to help get him through the film.

From there, Lord and Miller were fired, and Lucasfilm and Disney brought on industry vet Ron Howard to reshoot most of the film to the studio’s liking.

It’s always tough to truly know what goes on behind the scenes of major studio films.  Anonymous sources will always add some sort of hyperbole to what actually occurred.  But, we know for sure that production was contentious, and Disney and Lucasfilm will need to reevaluate how they handle this popular property moving forward for it to succeed.

Bradford Young is a Rising Star as the Director of Photography

If there’s something that everyone can agree that the new crop of Star Wars films has done well (judging by Twitter, this isn’t a very long list), it’s that they’ve wonderfully blended practical and CGI effects.  There’s something about seeing a puppet in a Star Wars film that just feels…right.

This time around, however, Solo: A Star Wars Story has Bradford Young as its cinematographer, and he creates a visual flair that we haven’t seen in a Star Wars film before.  Funny enough, Young is the only crew member to survive the change from Lord and Miller to Ron Howard.  You may know him from his work on Arrival, and he adds a similar palette to Solo, creating a sense of grime and soot that covers the frame while contrasting it with stark whites and flashes of bright colors.  It’s quite striking, and it matches the idea that Han Solo has always been a part of a criminal underworld.

Sometimes, the film is quite murky and even dingy, but it’s something different from the rest of the Star Wars films, a change of pace that works in its own right for Solo to become a distinct visual experience.

But other than the visuals, Solo: A Star Wars Story blends into the background every step of the way.

Alden Ehrenreich is fine as the titular character; Emilia Clarke is fine as his love interest; Woody Harrelson is fine as a seasoned smuggler; Solo is just fine in every respect.  It has a standard plot that rarely deviates from the norm (if at all) that includes even more standard Star Wars roughnecks that are up to standard smuggler business with their own standard Star Wars agendas.

Ron Howard is a very earnest director, and that tone is very obvious throughout Solo as well.  The problem is that this feeling zaps the energy out of the film when it desperately needed some.  The action isn’t as furious as it should be; the personalities aren’t nearly as colorful as they should be; the humor is never as zany and clever as could have been.

It’s pure speculation at this point, but Solo might have been better suited for a director (or directors) with a flair for the eccentric, and Lord and Miller might have been the guys for the job.  Solo as constructed is unbelievably safe — it’s afraid to try anything that’s worthwhile.  It never pushes the envelope in any respect and, as a result, it’s a bland experience that doesn’t add anything new.  Whatever enjoyment one can find in this film is tied to other Star Wars adventures — not this one. 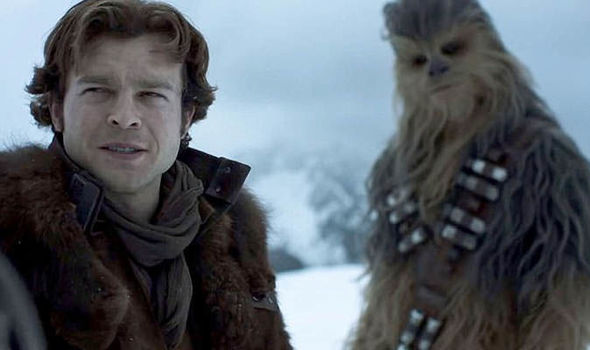 Solo Struggles to Feel Important as a Prequel Origin

Any of these spinoff movies that circle around characters that have already been introduced in other Star Wars films will always struggle to answer one important question: what’s the point?

With Solo: A Star Wars Story, you know that the main character along with others from the original trilogy aren’t going to meet their demise, which immediately drains the film of any stakes in that regard.  However, this problem is fixable if the script in such a prequel takes a new look at the characters and sheds light on their fears, hopes, and dreams that wasn’t necessarily present before.  Although it’s a bit of a cheat as a prequel-sequel (and a bit of a clichéd example), The Godfather Part II is the perfect representation, showing Vito Corleone as a young man and how his rise mirrors Michael Corleone’s fall while adding true character development.  Solo never attempts such growth.

Realistically, we know about as much about Han Solo as a character as we did before Solo: A Star Wars Story.  He’s a cocksure, scrappy smuggler with good intentions — that’s it.  Solo puts him into new situations, but there’s no growth to behold for him as a person.  Basically, Solo acts a means for talented younger actors to do impressions of other performances.

So, the purpose of making a Han Solo movie isn’t very clear, except to add more references to other Star Wars films and to sell a few more action figures.  All of these movies are products at this point, but Solo does a pretty terrible job of hiding that fact. 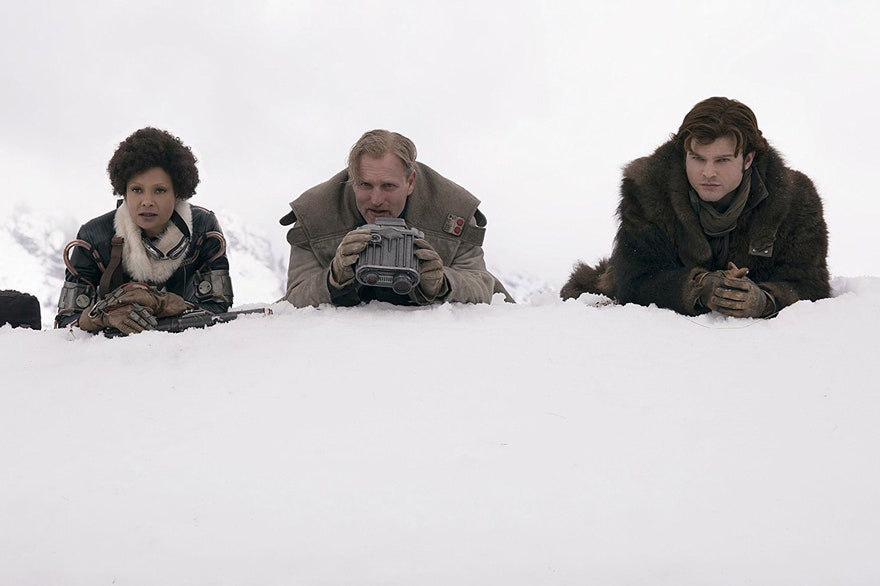 Solo isn’t the train wreck that many probably wanted it to become, but it sure would have been more interesting if it was one.  The latest non-episodic Star Wars film appears terrified of trying something new, and its humor, action set pieces, and everything else you could think of (except for maybe Donald Glover’s Lando) just comes off as highly unremarkable.

The next Star Wars movie isn’t due out until Episode XI hits theaters in December of 2019, and this prolonged break from anything Star Wars related might be exactly what we all need.  Because for now, everything is quite stale.

Thanks for reading! What are your thoughts on Solo: A Star Wars Story? Comment down below!

“Solo isn’t the train wreck that many probably wanted it to become, but it sure would have been more interesting if it was one.”

This is a wonderfully written review that makes some salient points about the cinematography and safe nature of the film.

I think that Solo: A Star Wars Story is a fascinating inversion of the burgeoning adolescence theme of the saga. Unfortunately, in execution, the theme has no emotional resonance due to a deficient central performance. But, the film picks up the slack with its world building and cinematic craftsmanship.

You can find out more by reading my review below.

Ill have to take a look! Thanks so much for reading!

I think Han needed to be much darker and/or we needed to see his development and change. How did he get from earnest young “good guy” to the bad boy from A New Hope?

Totally agree! To put it bluntly, they needed to make him a dick, but they were probably too afraid to do that with him.

Well-written review, Nick! I really enjoyed the movie, but I can’t argue with any of your analysis and points!

Thank you so much! I’m happy you enjoyed it! I’m just one opinion in the end :)

I enjoyed it enormously but I take all of the points in your write up in the chin. All I wanted was to spend a couple of hours in the Star Wars universe traveling the underbelly and seeing the low stakes environments without any ‘hokey religion’ stuff or planets blowing up. The Kessel run was fun even though they made it. Lando’s love for his droid was truly fresh and Han meets Chewie was superb fun.

Well I’m happy you enjoyed it — I’m actually quite jealous that I couldn’t love it as well. I could absolutely see where if you were just looking to have fun in the Star Wars universe that this film could do plenty for you, so I certainly can’t fault you for it!

It was a blast. Way more fun than the last entry in the Episodes

What did you think of Donald Glover’s Lando?

I thought he was fine, just like the rest of the film lol. It was sort of like an impression that wasn’t allowed to be anything more than a copy of what Billy Dee Williams did. I’d like to see him in another movie where he’s allowed to do more

Oh man. Thanks. I hoped they’d give more flesh to Lando with Donald Glover’s talent- but dang. I really want to see him in a Solo type role. Gah. Like Lando! I demand a do-over! Sigh.

I think he would’ve been better served in the Lord/Miller version of his movie. Ron Howard is too earnest to direct this script

You always do a well-balanced review :)

Thank you so much! That really means a lot!!!

Exactly! It doesn’t do anything exceptional. It just sort of…exists

Great review! I definitely agree with a lot of your points

Glad to know someone agrees with me 😁. Thanks for reading!

Thank you for this review! I will definitely wait until it’s out on DVD or streaming to watch it. 👍

You’re very welcome! That’s a good call if you ask me!