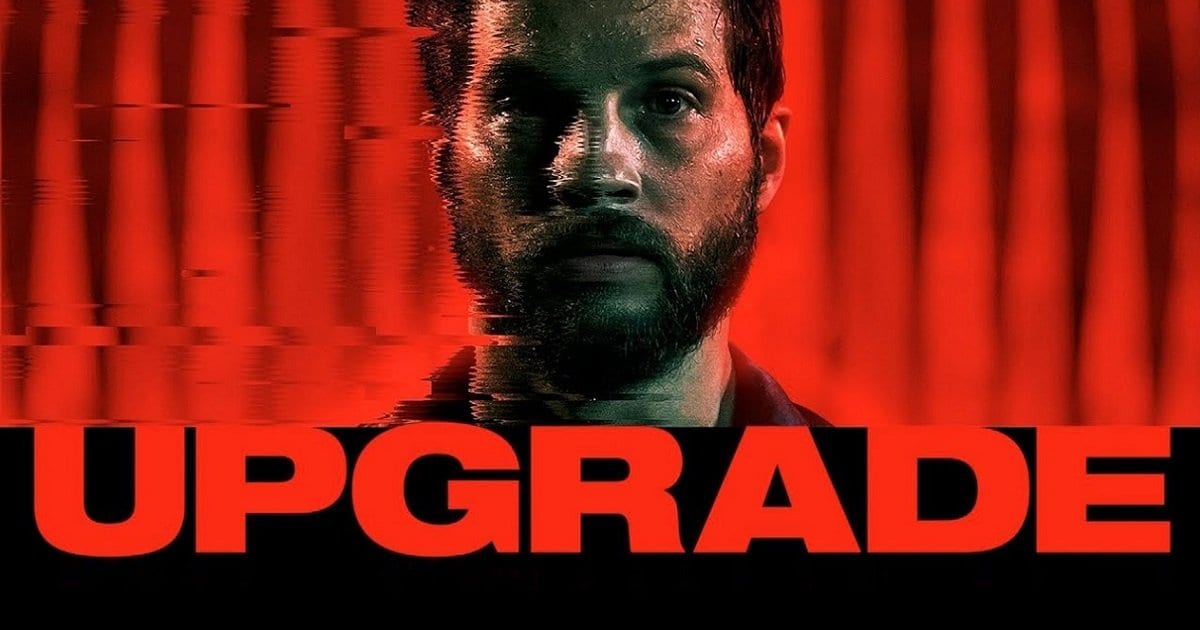 During the summer movie season, there’s plenty of massive films that we all know are coming.  Infinity War started the party, eventually giving way to Deadpool 2, and there’s still other major films like Incredibles 2 and Jurassic World: Fallen Kingdom to come down the road (along with many others).  But, no matter the year, there’s always a few movies with little fanfare leading up to their release that end up becoming sleeper hits, and Leigh Whannell’s Upgrade is absolutely worthy of being a part of that group for the summer of 2018.

On their way home, Grey Trace (Marshall-Green) and his wife are brutally mugged by a group of rogue assailants.  Unfortunately, the attackers kill Grey’s wife, and they leave him paralyzed.

Depressed, Grey just wants to end it all — until an inventor approaches him with another option.  He has created an artificial intelligence implant called STEM, and he believes that it can give Grey the ability to walk again.

The procedure proves successful, and Grey has a new lease on life — with a twist.  It turns out STEM has a voice, and it can also control Grey’s body movements (which turns Grey into quite the badass).  Together, the tandem looks to take revenge on the people who killed Grey’s wife with a bloody brand of justice.

Upgrade enjoyed success at the SXSW festival a few months ago and is another release from Blumhouse’s multiplatform distributor BH Tilt, an expansion for the company that proves as another reason why Blumhouse is slowly taking over the low-budget-thriller-horror market.  All of these things are great, but there’s only one thing I really want to discuss: Upgrade star Logan Marshall-Green’s resemblance to Tom Hardy.

It’s been a joke in movie meme circles on Twitter for quite some time, but just in case you weren’t aware: 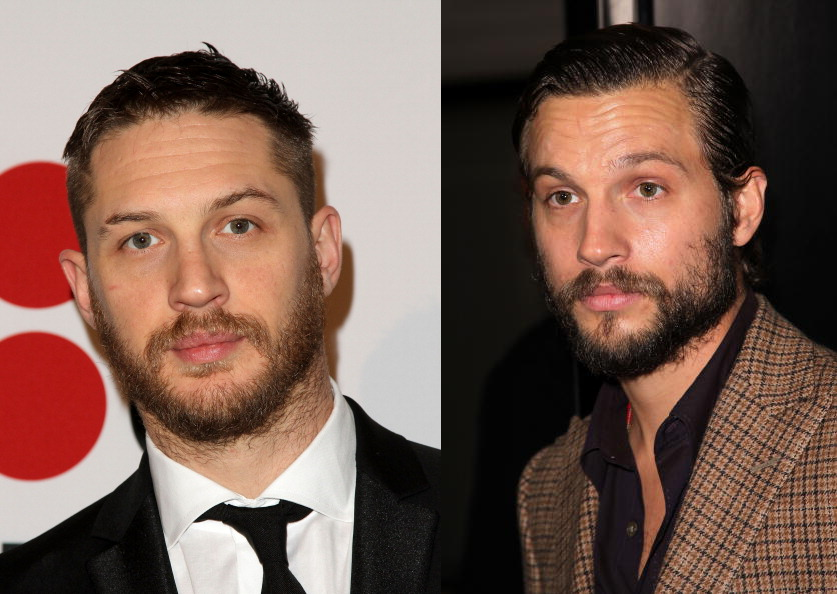 The resemblance is uncanny, isn’t it?  As a funny aside, my girlfriend actually thought that Logan Marshall-Green WAS Tom Hardy when we saw a trailer for Upgrade in theaters together a few months back.

That being said, Marshall-Green is at the mercy of a lot of jokers for being a “discount Tom Hardy” when he should be getting praise for his skills as an actor.  He’s a damn good one, in fact.  I’m crossing my fingers hoping that Upgrade is the proper avenue for him to show his abilities to film lovers everywhere.

There’s a few physical performances a year that will never get Academy consideration, but they deserve tons of praise nonetheless.  Without hyperbole, Marshall-Green’s work in Upgrade is some of this year’s finest thus far.

He has to do so much with body; it’s on the same level as Keanu Reeves from John Wick.  After the initial accident that leaves his character paralyzed from the neck down, Marshall-Green must stay completely still for extended scenes.  But after his procedure, he turns into a robotic ninja (although STEM later explains that he’s not one).  And due to complications between the creator of STEM and Marshall-Green’s character’s circumstances, he routinely has to switch back and forth between an insane fighter and a quadriplegic within the same scene.  It’s pretty amazing stuff.

Even better, STEM controls his body movements when he fights, essentially meaning that he’s along for the ride as his body beats the pulp out of bad guys.  So while his body is moving in very precise, succinct movements, he’s also horrified at what his body is doing.  It’s a great juxtaposition, and it had me howling with glee in the theater. Even if you don’t know Leigh Whannell’s name, you know his work.  From creating Saw and Insidious, the Australian talent is a mainstay in the industry at this point as a writer/creator.

However, Upgrade is only his second directing effort (Insidious: Chapter 3 being the first) despite years of working as a writer and actor, and I was intrigued to see how he’d work with the material.  Luckily, he might offer the best performance of anyone involved in Upgrade.  In the best way possible, Upgrade is an assault on the senses, creating an expansive, dingy world on a shoestring budget.  In combination with a great, droning score that heightens the level of anxiety in the viewer, Whannell creates a clever twist on the Cyberpunk subgenre with great writing that accentuates the film’s creative elements and properly places the more familiar elements in the background.

That being said, my personal favorites moments in the film are those sudden bursts of chaotic, bloody action.  Whannell directs these sequences with an incredibly active camera, zooming it around at a frenetic pace while keeping all the fights incredibly coherent.  I think he’s found his calling as a director.

At It’s Core, Upgrade is a Fascinating, Cynical Discussion of Technology and Humanity

And while the crazy fights are bound to get the headlines, Upgrade is primarily a discussion of technology and its growing effect on day-to-day living.

We’ve seen many story beats included in Upgrade before in other films (a guy taking revenge for the death of his wife isn’t exactly an inventive setup for a film), but Upgrade extends itself beyond the normal thrills of B-movies by taking a rather cynical, nihilistic point of view on the connection between humanity and technology.

In fairness, a lot of the characters become rather disposable in service to this discussion.  This issue is somewhat in service to the point that Whannell is trying to drive home, but many characters are basically cannon fodder or exposition machines.  Still, there’s no questioning that Leigh Whannell injects life into the moderately tired themes included in Upgrade with his wildly gruesome approach to human enhancement.  You’ll have fun watching the thrills in Upgrade, but you’ll leave the theater with a rather sobering perspective on the dangers of our growing dependency on tech.

Leigh Whannell established himself a long time ago as a solid creator, but Upgrade takes him to another level.  Held together by a great performance from Logan Marshall-Green, Upgrade is gleefully violent and angry, acting as a Cyberpunk thriller with a focus on technology and its continuous integration into society.  If you’ve ever wanted to watch a movie that includes a man getting his head split in half and an intelligent discussion on a bleak future for our species, this is the movie for you.

Thanks for reading! What are your thoughts on Upgrade? Comment down below!

I knew I couldn’t have been the only one that thought this guy looked just like Tom Hardy! And with the release of the Venom trailer I’m thinking to myself, “Do all of the Tom Hardy’s of the world talk to themselves?”

Someone needs to write a buddy movie with them as twins or something like that. I’d pay top dollar! lol

We saw this last week, and I wasn’t thrilled. I wanted to be thrilled… perhaps it’s one of those I need to give a second chance. I was the same way with John Wick the first go around, but upon a second viewing loved it!

I do throughly love the idea of STEM though. And the ending was very amazing.

You never know — you could just dislike it, and that’s perfectly reasonable!

I loved this movie! Even better I went and saw it without even knowing what it was. Made for an awesome time at the show. Absolutely worth checking out this summer.

You said it perfectly my man!