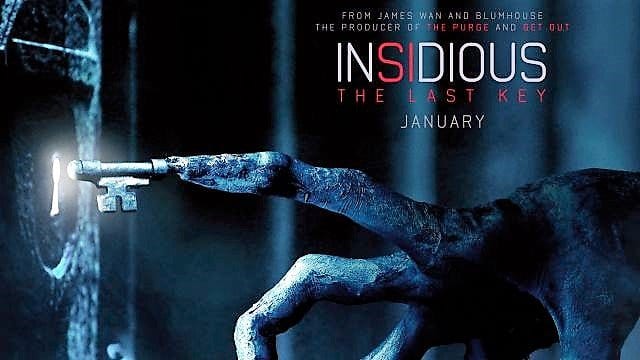 In an attempt to continue an admired horror property, Blumhouse Productions has taken over the Insidious franchise for the fourth installment in the series: Insidious: The Last Key.  With a bunch of Oscar films expanding out into more theaters, The Last Key hopes to act as quality counterprogramming.  The following review will be spoiler free. 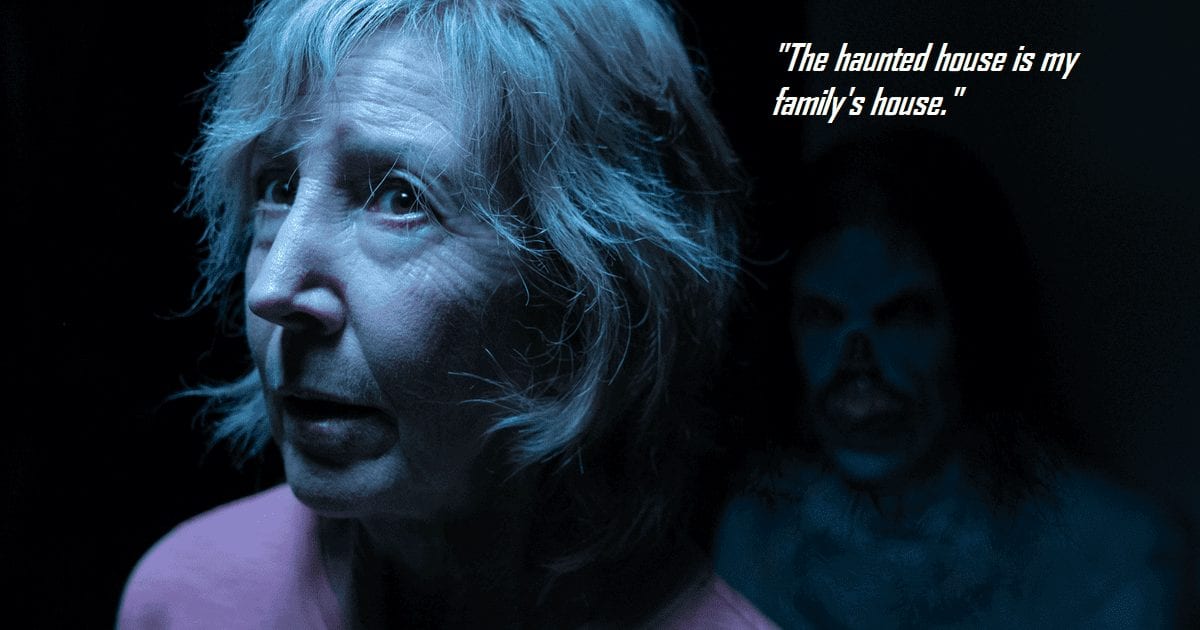 Elise Rainier (Shaye) remains a great help for people who deal with paranormal disturbances in the world.  Upon dreaming of a ghostly encounter, Elise gets a call from a man in need that lives in her childhood home.  Stricken with terrible memories of her childhood, Elise must embrace her own fears while encountering a figure with keys for fingers that appears to have some pretty nefarious intentions.

January is upon us once again.  Called the “dumping ground” of movies, we typically see studios drop whatever trash they have left into theaters.  This circumstance has a few points of logic behind it.  1) studios avoid deflating fourth quarter financials to curry favor with investors that pay close attention to the time of year where companies are supposed to move from the red to the black.  2) Oscar campaigns require a lot of money to finance which keeps January films from getting big marketing pushes.  And 3) studios have many other big budget films that are releasing later in the year that they are focusing all money and attention towards.  Because of all of these reasons, most January movies are low-budget films with unproven talent at the helm.

Insidious: The Last Key fits squarely into that narrative.  With a budget of $10 million, the film should make back its production budget in its first weekend based solely on its brand recognition.  Moreover, The Last Key has a fairly unknown director in Adam Robitel, a man who has some lesser known film credits to his name.

But, a trend that has began to occur in recent years is a hidden gem among the garbage.  Studios are beginning to realize that they can make some money with a well-constructed film that offers different thrills when compared to Oscar films in the month of January.  Blumhouse is certainly hoping this is the case for Insidious.

As with the other Insidious films, Lin Shaye is at the center of it to offer a committed performance that grounds the film with an emotional center.  The Insidious films have always set themselves apart by making an elderly woman the lead of the franchise.  Even when the stories themselves don’t come together, Shaye is always there to provide a sense of sincerity.

Insidious: The Last Key is deeply tied to Shaye’s character.  Acting as a prequel to the other films in the franchise, we get a look into her tortured backstory as child and the upbringing that turned her to help those in distress from the paranormal.  Unlike many low-budget horror films, The Last Key has legitimate heart and a main character about which you care.

Shaye is given a lot to do throughout the film.  She handles adversity with strength and perseverance, building a rapport with the audience as a battered character that works to face her personal demons.   Although the ride gets a tad bumpy, she remains likable and compelling, elevating the film all by herself. 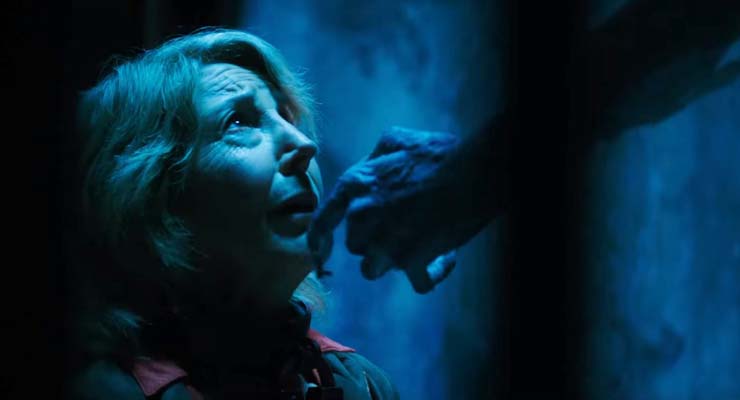 Lin Shaye has always been the best part of this franchise, and that sentiment continues here.

Incapable of Setting Up a True Scare

But, a horror movie that isn’t scary is a serious problem.

The Last Key has the usual tropes that occur in lesser horror films these days.  In an attempt to create a feeling of tension and anxiety, all the sound is taken out of each scene for minutes at a time.  The scenes themselves don’t build a feeling of anxiety or fear in the viewer, they merely prepare for an eventual jump scare that doesn’t provide anything memorable for the viewer.  Paraphrasing a quote from the great Roger Ebert, scenes pass through your mind without hitting any brain cells.  Some of the jump scares are even too short to properly understand what just made you jump.  Rather, they’re an easily forgettable loud bang.

Insidious: The Last Key also struggles to make its main paranormal force a serious threat.  The trailer for the film did a lot to instill that creepy image of a figure with keys for fingers, but it never has the impact that you would want from a haunted house film.

In horror films where a notable monster is at the center, the director and editor normally play with the reveal of the creature.  They’ll show an out of focus long shot of the being or quick cuts of it from certain angles only then to reveal the monster in all its glory.  Whatever the case, those tricks build excitement and intrigue for the eventual full reveal.  In Insidious: The Last Key, the camera merely cuts to the creature without a grand entrance or anything close to one.  This point sounds like a nitpick, but the creature’s appearance in bright lighting almost ruins any fascination with the figure.  In fact, it could even lead to laughter. 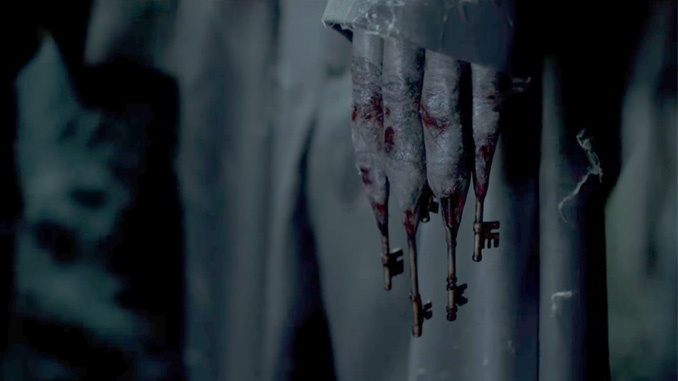 While Lin Shaye is the clear star, her assistants are also standouts, but for all the wrong reasons.  Her two helpers in the discovery of otherworldly beings are quirky for the sake of being quirky, delivering unnecessary humor that falls completely on its face.

Sometimes, humor just doesn’t work out in a scene.  It happens.  After all, we’re all human.  But, The Last Key is insistent on continuing its juvenile behavior throughout the entirety of the film, undercutting the power of many scenes.  Do I need to see a grown man eat an ice cream sandwich before helping to solve a metaphysical disruption?  Answer: no.

Funny enough, the writer of the film is also one of these assistants.  Maybe he should have gone through a few more drafts of the script…

In a world where truly terrible films exist, Insidious: The Last Key isn’t at that level of despicable.  Instead, it’s merely a film with a lot flaws.  Lin Shaye continues to act as a nice foundation of whom to build these movies around with solid acting and heart, but everything around her is a bit of a misfire.  From horribly misplaced humor to an abundance of jump scares, the fourth Insidious movie feels like the fourth movie of a franchise.  It’s tired, not overly inventive, and, above all else, pretty pointless.

Fans of the franchise might enjoy themselves, but everyone else need not apply.

Thanks for reading!  What are your thoughts on Insidious: The Last Key?  Comment down below!

The Last Key is actually a prequel sequel, as it takes place after the third film, but prior to the first 2! Not that it matters much! : )

I’m very much aware of that fact! I just wanted to say prequel to get people in a better frame a reference.

I really liked the insidious franchise up till now. I haven’t seen this latest installment yet, but reading your review for it, I don’t think that I am really missing out on much?