Sunset Boulevard vs. The Bridge on the River Kwai – Best vs. the Best 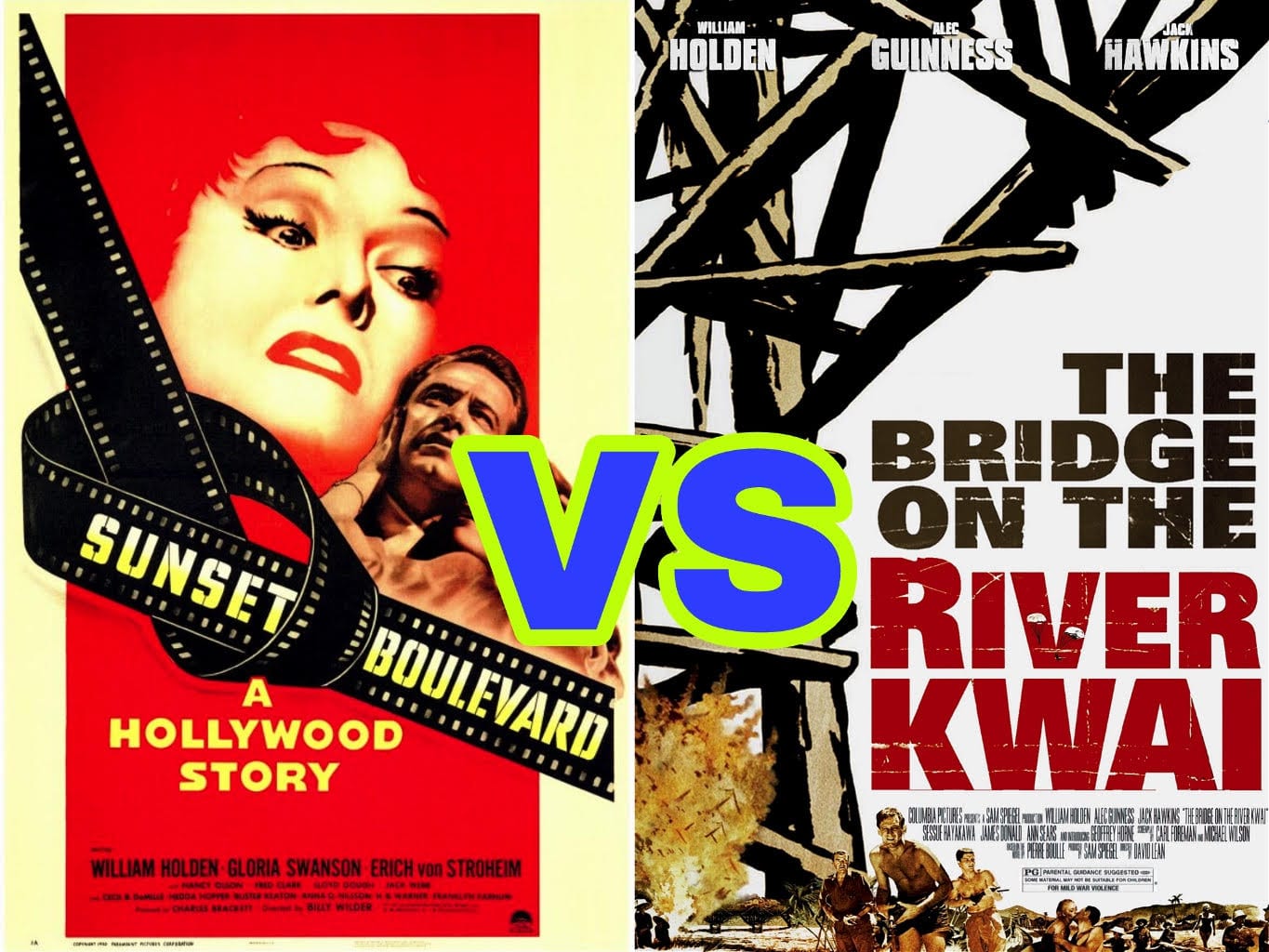 As a part of my new series, I will be pitting two movies from AFI’s Top 100 Movies of All Time against each other.  Today that honor goes to Sunset Boulevard vs. The Bridge on the River Kwai. Originally published on ReelReader.com as a way of sharing my opinion on the best classics cinema had to offer, it now finds a new home on MovieBabble.

Hopefully, it can reach a broader audience, give casual moviegoers reasons to reach into an older catalog of films and continue the discussion for the screen junkies. Share your opinion down in the comments. I’m very curious to hear what you think! It’s time to get to know a little bit more about the competitors. The following contains spoilers. 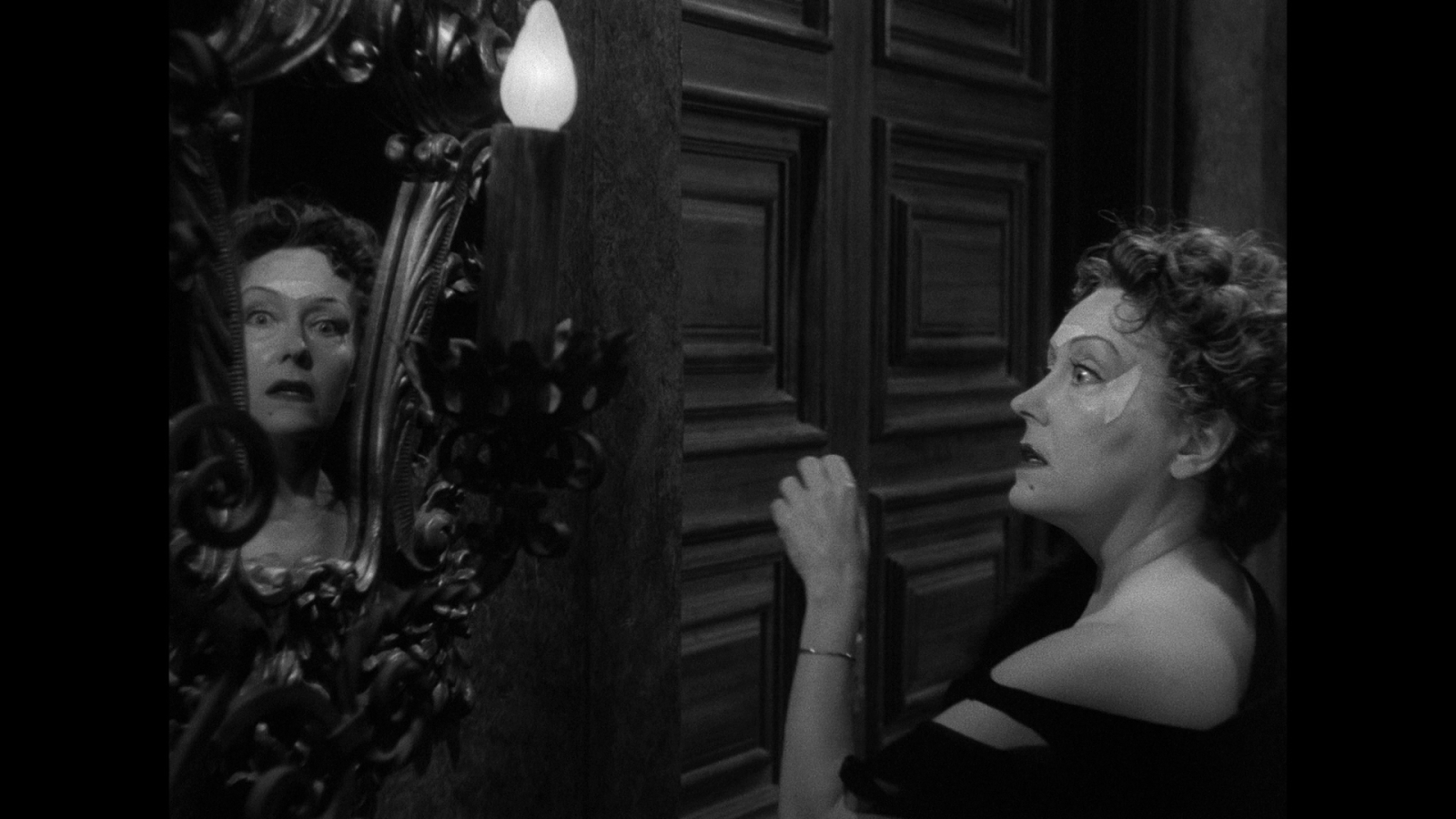 image via Film Noir Board

Sunset Boulevard (1950) is about a screenwriter, Joe Gillis (Holden), who has a chance to meet Norma Desmond (Swanson), an arrogant, dwindled and once in her prime star. Together they try to rekindle their status in Hollywood. The film was nominated for eleven Academy Awards and won three. 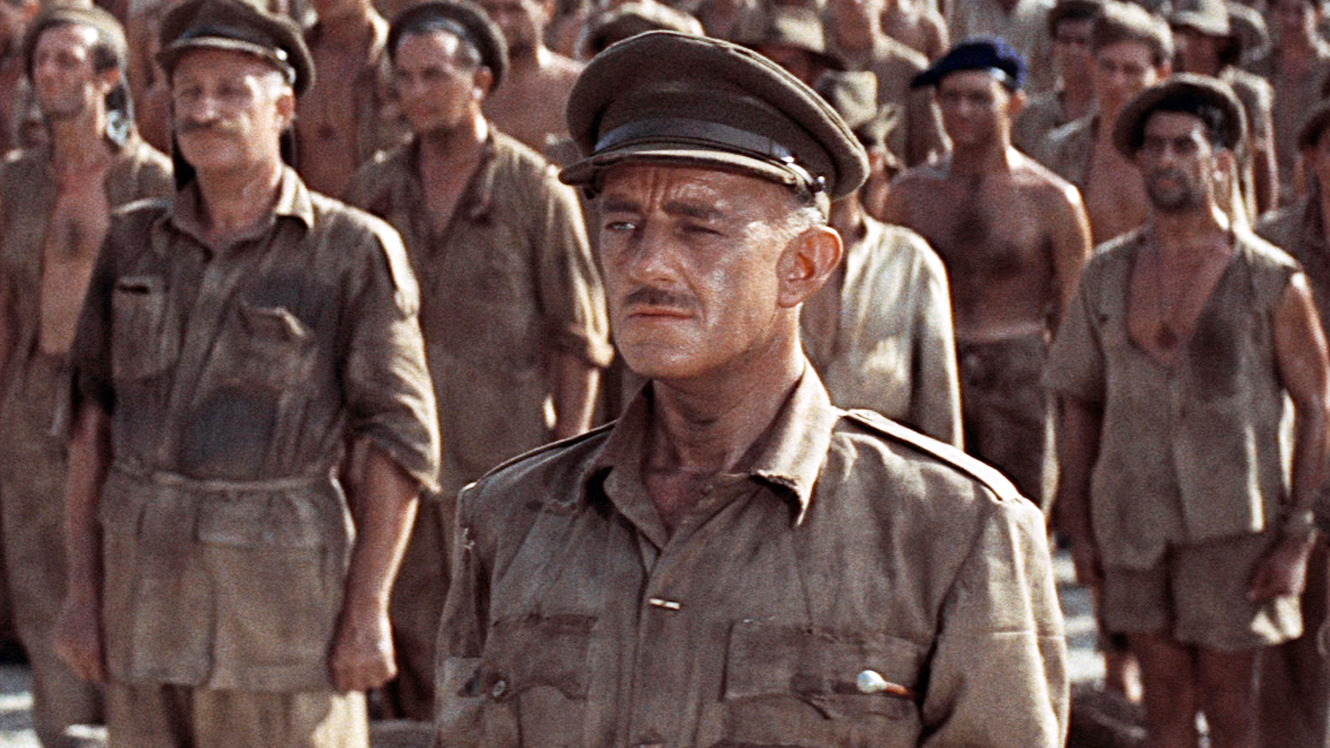 The Bridge on the River Kwai (1957) follows British prisoners of war during WWII. Enforced to build a bridge, their first instinct is to destroy and sabotage it. Only after the persuasion of Colonel Nicholson (Guinness) are they willing to cooperate with the enemy ranks. Known for its cultural impact, it went on to win seven Academy Awards.

The focus of Sunset Boulevard is no other than the relationship of its two main leads. The director prevails on this authentic choice for its time, however, in a more subjective manner, there is a lot lacking. I never got a feeling Joe Gillis wanted to stay by her company because it was his only viable option, or because he cared. The tension reaches another offbeat level when the two kiss… and it comes off rather creepy. To throw in another curveball Norma ends up being the murderer of Gillis.

What the two had going for one another never felt earned. I do feel like Norma’s character deserves praise. All her scenes with DeMille prove she reaches her true potential. The amount of build-up we had works its way up unlike with the scenes I had gripes with.

Meanwhile, The Bridge on the River Kwai bundles itself with a bigger quantity of characters such as Colonel Nicholson, Commander Sheers, and Major Warden. On paper, it sounds messy, but in execution, it’s the superior take. I see this movie as the perfect deconstruction of how to develop your characters. Colonel Nicholson consistently went from becoming a tortured soul with the will of steel to an obsessed man hell-bent on completing the bridge’s construction.

Even characters like our Canadian Lieutenant Joyce who don’t seem all that interesting get a story arc. Colonel Saito is an example of an antagonist that practically didn’t need any development. Being a Japanese enemy keeping others imprisoned and tortured should be enough, yet the director went out of his way to give him something deeper boiling inside. His necessity to reach his goal melds with Nicholson’s self-righteousness at a greater level than Sunset Boulevard ever manages.

Sunset Boulevard caught my attention right off the get-go. It feels like you’re willingly entering insecurity. That’s the sort of feeling I would’ve demanded more of as it grabs your attention by capturing it with the tone. If the movie had continued down this path I would have found myself more pleased. The choice to go with a more character-driven story wouldn’t have been a problem if the script introduced better ways of reaching the places it wanted to reach.

In contrast, the cinematography and music get their message across smoother like in the last scene which comes close to what I had expected. It’s a scene where Norma along with the filmmaking of sound, camera work and use of contrasts come together to create something special. Even iconic.

But again, I’d argue its competitor handles the job a lot better. What Sunset Boulevard does in its opening, David Lean does in the entirety of his film. The visual storytelling interweaves itself with words. This doesn’t only make the scene do its job of providing you with the necessary information. It gives you an understanding of the importance of that information. We can point to almost any scene and get that result.

You could bring up my second favorite one, the conversation between Colonel Nicholson and Colonel Saito. You not only know that but feel it. The conversation plays with the perspective of power. When Saito seems in control he’s the one standing. The tables later flip and when Nicholson is the one who is seemingly gaining prominence, he’s the one towering over his rival. That’s just one scene. I didn’t even mention Lean’s characteristic and impactful establishing shots of the environment.

Personally, there wasn’t more to it for me than just the relationship between two fading Hollywood figures. Some of it is interesting, but a lot of it drags while also feeling overly rapid. I wish I could say more about the entirety other than what I already mentioned.

And then we have The Bridge on the River Kwai which completely obliterated my expectations. I still feel like I didn’t say enough about the movie. There’s just so much to love. I did reveal my second favorite scene, it’s only proper I share what the first one was.

It’s the final act when the commandos are about to blow up the bridge. Everything you watched explodes in the end. I say this with a positive undertone, in a sense that the invested time of the audience member pays off with one of the most beautifully chaotic endings in cinema history. So many emotions were going through my head, it all was so unpredictable.

The Bridge on the River Kwai blows up its opponent with a 3-0 tally. Maybe the picture didn’t get small after all.

I need to make a confession, I didn’t like Lawrence of Arabia all that much. Yes, I know this takes away some of my cinephile credit, but what can you do? It’s my opinion. That was also the first David Lean movie I’ve ever seen so one can imagine the pleasant surprise this was for me. I didn’t expect to get one of my favorite movies which I hope to rewatch on the big screen one day, someday.

Previously: Singin’ in the Rain vs. It’s a Wonderful Life

Thanks for reading! What are your thoughts on Sunset Boulevard vs. The Bridge on the River Kwai? Comment down below!

I definitely agree! And GREAT series!

I agree with your assessment of both movies. I saw Sunset Boulevard once. I never need to see it again. I didn’t like the lead characters. I have seen Bridge more than once and liked it each time. It is a powerful movie. I appreciated the characters and related to the situation having been a WWII POW in the Pacific myself. Good reviews.

Love the idea of this series, and I look forward to following it! I haven’t seen either of these movies but I think I definitely need to see the latter now.

You have compared oranges with lemons. In doing so yo have tarnished both

I don’t mind comparing oranges with lemons. I find it can sometimes be more fun this way, but each to their own.

Didn’t read as I haven’t seen either film yet, but I do love the idea of this series!