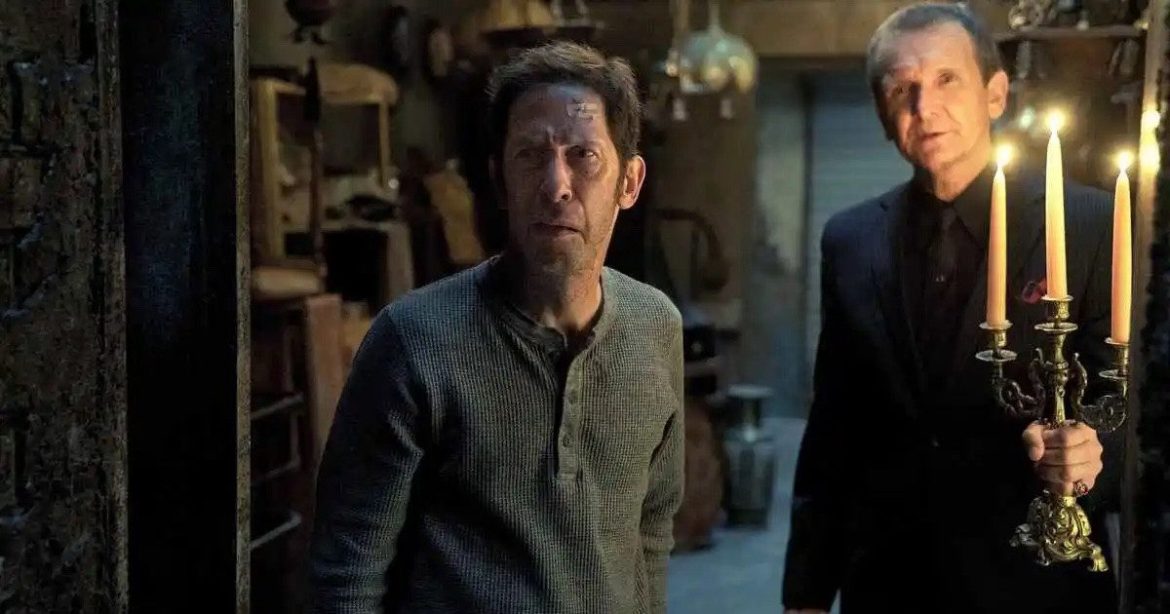 Ah yes, God. Silent, strong type that loves to see us squirm with free will and other delusions. But what about his adversary, huh?

What makes Guillermo del Toro such a fun director for me is that with his every cinematic outing, he seems like a kid in a candy store. Whether it’s making a gothic horror film with Crimson Peak, a kaiju movie with Pacific Rim, or his romantic tribute to The Creature of the Black Lagoon, The Shape of Water, his passion for the subject is on full, giddy display.

With his newly produced Netflix show, Cabinet of Curiosities, I can just see him fulfilling his long dream of being a horror host. Something he imagined himself to be on when he was just a child, on those many late nights when he should have been sleeping, watching movies his parents wouldn’t approve of him watching.

Cabinet of Curiosities, is an eight-episode long anthology series, each one with a different director. Every episode opens with the director himself introducing the story and its themes. From its titular Cabinet of Curiosities, del Toro takes out an item that is important to the specific story. Each introduction ends with del Toro telling us the name of the episode’s specific director, letting us know that we are in good hands.

As a horror host, del Toro’s performance is earnest enough to work. Do note that he’s doing it completely straight, so don’t expect any Cryptkeeper puns.

Being a fan of anthology horror, I was excited to see this show, especially with the many talented names involved. It reminded me a little of the heavily flawed show, Masters of Horror, created by Mick Garris, in which Garris assembled one of the best infamous cinematic authors in horror cinema. Though a great idea, rarely did any of the episodes evoke the greatness of its director — though two of the episodes directed by John Carpenter come highly recommended.

With COC, we have directors such as Vincenzo Natali, Panos Cosmatos, David Prior, Ana Lily Amirpour, and Jennifer Kent.

But in its debut episode, del Toro gives us the name, “Guillermo Navarro”, a man who might not be particularly known for his directorial output, but is extremely lauded for his cinematography work, most notably with his collaboration with del Toro himself — all the way from 1993’s Cronos, del Toro’s debut film.

Lot 36 is a confident opening to the show, harking back to classic EC horror roots. You can see its influences oozing off the screen. It immediately tells you that del Toro has gladly corrupted his mind with Amicus anthology horror films and Tales from the Crypt episodes.

Without delving too much into the plot of this brisk, 40-minute episode, it revolves around Nick (Tim Blake Nelson), a man heavily in debt, who buys a storage unit, hoping to retrieve something valuable in there to pawn off. When we are introduced to Nick, we see him listening to a white supremacist radio channel, nodding affirmatively when the radio host talks lamentably about the loss of “white rights.” Immediately, we know Nick isn’t a sympathetic protagonist, and his attitude towards others throughout this episode, especially towards minorities, lets us know that.

Within his newly acquired storage unit, lot 36, are items pertaining to the previous owner’s interest in the occult. Nick’s efforts in pawning off some of its seemingly valuable items, will lead him on a dark path.

One of the stronger aspects of the episode is the characterization of Nick. With him being a racist, it avoids the simplistic preachiness that is common to modern social commentary. Nick’s racism is more complex, stemming from resentment of his low economic position and suffering a permanent injury due to his wartime efforts. While still a despicable character, the script (as well as due to Nelson’s great central performance) gives him just enough humanity for him to not become a caricature.

Besides Nelson, another standout performance comes from Sebastian Roché as Roland, a German antique collector with a particular interest in the dark arts. He gets some of the best dialogue — evidenced by the quoted dialogue from the beginning of this review.

The story is entirely predictable, even if one is just moderately knowledgeable about horror anthology cinema, or television. It all revolves around the inevitable karmic justice that is meted out to the cruel ones or those who meddle with forces far beyond their comprehension.

To be honest, its predictability didn’t bother me. And besides, the sinister atmosphere and the creepy setting of the giant storage facility make up for it.

The finale is satisfying, though its execution is flawed.  Without spoiling too much, let’s just say a particular effect is portrayed through too much digital wizardry. It’s something I often feel with del Toro. For someone so enamored with old-school genre flicks, why not dabble into more practical effects instead of CGI?

Lot 36 is never dull, though I do think it could have been shortened. Why does Nick need to be in debt to an anonymous leg-breaking creditor? Perhaps to give him a ticking clock, to make him desperate and more sympathetic in turn, yet was this really necessary? Wouldn’t his bitterness at his lowly economic state be enough of a motivation?

Even with these slight flaws, Lot 36 is an excellent beginning to an exciting new show. And what sneak peeks we see from upcoming episodes, the whole season seems like essential Halloween viewing.

Thank you for reading! What are your thoughts on Lot 36? Comment down below!