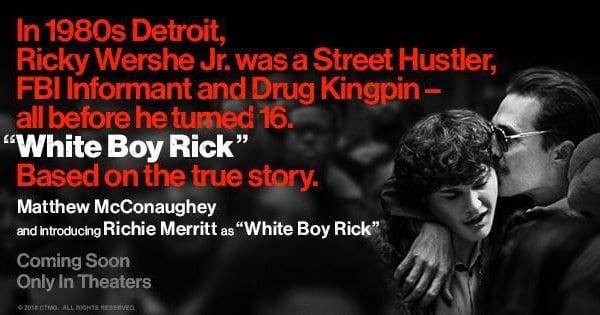 If you’ve gone to the theater in the last few months, there’s a high chance that you saw the excellently cut trailer for White Boy Rick multiple times. Seriously, Sony made sure that you knew about this movie if you were around anything movie related. And aside from a few issues, you definitely should know about this film — and do your best to seek it out.

As the promotional material painstakingly explains, Rick (Merritt) was a drug dealer, gun pusher, and an FBI informant…all before the age of sixteen. Through his and his father’s life (McConaughey), Rick experiences the meteoric rise of a kingpin in the streets of Detroit, but that success puts serious strife on his family, and, as you might expect, his well-being.

I haven’t seen a film bank harder on the tagline “based on a true story” in quite some time. Sony, you need to relax a little bit, maybe sit the next couple plays out before you start marketing your next mov–

Did Sony seriously partner with Eminem for Venom? Wh-what? Why??? Why would you cut a TV spot to Eminem’s lyrics? They’re as fast and fierce as they come, not to mention essentially impossible to cut any footage to.

Ugh. Sony, stop being the worst.

Regardless, the titular character of White Boy Rick is Richard Wershe Jr., and saying that his teenage years were checkered is one of the bigger understatements you’ll read on the world wide web today.

Yet one of the more troubling stories to come from this movie is from its production, not the subject matter. Evan Hughes, the author of The Trials of White Boy Rick, accused Sony of not only failing to counsel him while making the movie, but that they used his work without his credit. Hughes said the following on Twitter:

Because I keep having to explain: I'm not affiliated with the White Boy Rick movie opening Friday. The film used my work without pay nor credit. Actually the story is worse than that sounds! But I'll leave it there for now.

I urge everyone to not jump to conclusions in this situation, but it appears that Sony and the makers of White Boy Rick might have a little more to worry about than if the film performs to expectations at the box office or not.

Look Out for Richie Merritt in the Years to Come

It’s hard to believe that White Boy Rick is Richie Merritt’s first movie. Merritt is electric as Rick, a kid that merely wants the best out of life. We’ve seen the story of a down-on-his-luck kid wanting more out life than he currently has too many times to even think about counting them, but Merritt adds some new flavor to the story with his mesmerizing work.

Merritt certainly makes a choice with his performance, one that could have taken a sudden turn towards parody with a few minor miscalculations. Luckily, Merritt is extremely talented, and he perfectly captures a growing teenager that lacks the education to make completely cogent decisions to actually make himself better off. He aspires to the right ideals, but he simply can’t get out of his own way. Merritt walks the one between being sympathetic and idiotic. You’ll never condone his actions yet he’s still a character that you’ll want to root for to the bitter end.

Honestly, I feel kind of bad for Merritt despite his great performance. McConaughey is the real star here; he’s as magnetic as ever.

Sporting an incredibly unkempt mullet, McConaughey runs roughshod through White Boy Rick, forcing everyone to pay attention to him. There’s a specific sequence from McConaughey in the film where he must fight back his most animalistic instincts as he contemplates acting on his son’s behalf. He doesn’t manage more than a quiver and a teary eye but it’s still one of the more powerful images in the entire film.

McConaughey is entering a new era in his career. The so-called “McConaissance” is by all means over at this point in time. He’s still putting in amazing performances, however, and they signify that he’s going to continue to reinvent himself as an actor as he gets older. I can’t get enough of the highly unreasonable swagger that he imbues into his characters. It’s what makes his characters only those that could be created by him; there’s no one else like him in the industry. But White Boy Rick overall is moderately unremarkable. It has great performances from a great cast, and the movie is smart enough to sit back and let these awesome talents play around in this sandbox of acting possibilities as they please. However, if I’m being honest (which I should always be — I’m giving you my opinion, after all), White Boy Rick may sit back a little too often.

This is a classic three-star biopic film. It plays the hits quite nicely, giving you a solid idea of what Richard Wershe Jr.’s life was like in its most insane moments with plenty of style of flair. Yann Demange directs some of the film’s more energetic moments with a wonderfully pulsating beat thanks to some great song mixing from the music department that washes over you with its relentlessness. The problem is that this feel doesn’t extend to the thematic discussions that the movie tries to have.

White Boy Rick has so many opportunities to show classic cultural issues through a new lens. Whether it’s Rick’s desire to chase the American dream and escape Detroit, the fact that he’s the lone white person in a predominantly African-American story, or a condemnation of the United States’ prison system, none of it is as hard-hitting as you’d like. It’s all in there — and you could where more hands-on direction could have made the film incredibly powerful — but it’s not used. This movie is like an incredibly talented basketball team that never quite puts it all together. They have the great point guard, a solid defense, and lethal sharpshooters from the outside, but for some reason, every game appears arduous, like they’re struggling to find their stride with every lackluster possession.

White Boy Rick runs into pretty standard problems of biopic stories, but when you have some powerhouse performances from the likes of Richie Merritt and Matthew McConaughey, a lot of those sins can be forgiven. These two are pretty incredible; they make this entire movie worth watching.

Sometimes, you need to be able to sit back and watch a few great performers do their thing. White Boy Rick allows for such a scenario to take place. Thank you for reading! What are you thoughts on White Boy Rick? Comment down below!

Yeah, I liked it too.

If you are interested in facts and accurate information regarding Rick Wershe’s story please visit our page. Thanks in advance! Free Rick! facebook .com/FreeRickWersheJr/

Thanks so much for adding that 😁