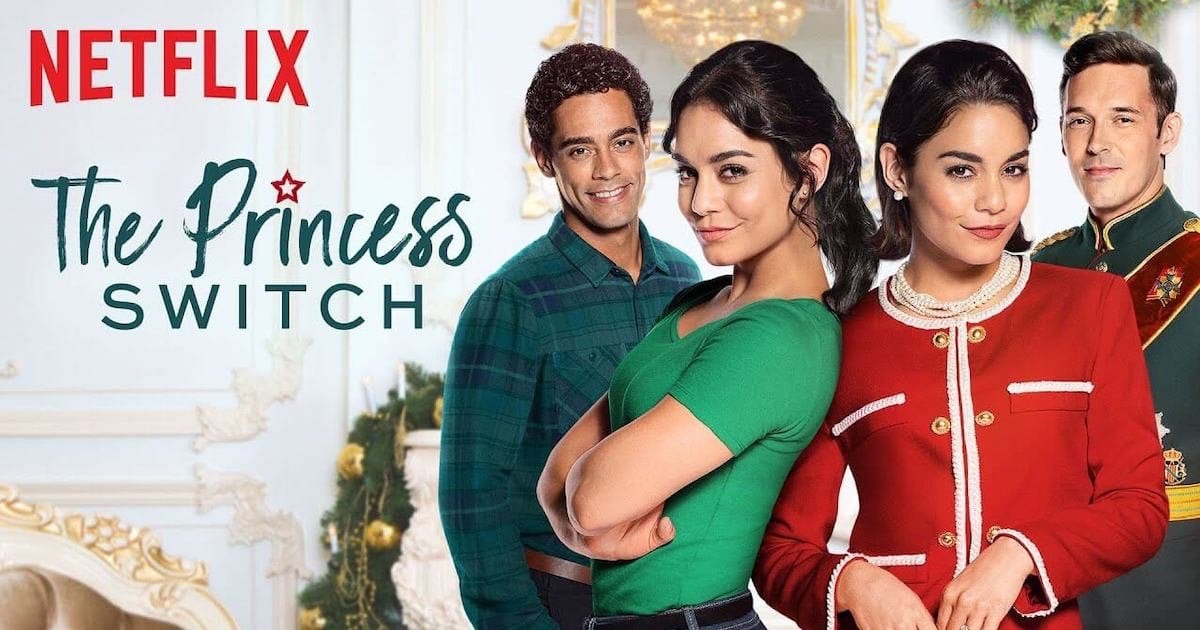 Can you believe Christmas is in a month’s time? I hope it’s starting to get charming and picturesque where you are, because all we have here in Singapore is Monsoon weather. And when Christmas is around the corner, you know its time for sappy Christmas movies, because Christmas brings romantic possibilities and not just presents (though love is the greatest gift). Time for Netflix to replicate the success they had with A Christmas Prince last year, and bring to us another royal Christmas treat, with the lovely Vanessa Hudgens as our protagonist.

The Princess Switch is not innovative or particularly creative, but Hudgens is charming enough to make me sit through the entire thing. The romances are credible to an extent, the premise not so much. The movie also goes to great extent to downplay the complications/obstacles, which I think made the ending not as satisfactory as one would hope.

Stacy (Vanessa Hudgens), an extreme planner with a penchant for schedules takes a spontaneous trip to the charming land of Belgravia to compete in the Royal Christmas Baking Competition, at the encouragement of her sous chef and best friend, Kevin (Nick Sagar). While preparing for the contest, Stacy has a run-in with a stranger who looks exactly like her, though with a very contrasting personality to her own. Free-spirited but royally obligated, Duchess Margaret Delacourt (also played by Hudgens) wants nothing more than to experience life as a “normal person” before she dutifully marries the crown Prince of Belgravia (Sam Palladio). So the two swap places, and what initially seemed like an easy thing gets complicated when the Prince changes his itinerary to spend more time with his future bride-to-be.

The Royal wedding this year, when Prince Harry wed Meghan Markle, is an event that Hudgens took inspiration from when it came to the romance between Prince Edward and Stacy. As for the princess part, Hudgens definitely had a Disney princess obsession while growing up, identifying the most with Princess Jasmine because of her spunk. This made her eager to take on the part of princess here. The movie borrows from doppelgänger tropes that has come before it, which was most notably done in The Parent Trap. There is most certainly some mirroring between both movies, since Hudgens switches between an American accent and a British one just like Lohan did for her movie.

Hudgens is the Most Charming Part of the Movie

With a lesser actress, this movie would not be able to walk, let alone stand straight. Hudgens handles both roles competently, and has decent chemistry with both her male co-stars. What I don’t buy as much is the preparation for the swap. Both Margaret and Stacy work on getting the more obvious things accurate, such as the walking, the decorum and brief insights into family history. Perhaps it is possible to correct posture, though Hudgens does put on a good show of not being able to do this very convincingly as the Duchess, but for me, the biggest issue I had was the adopting of accents.

There are moments when Hudgens says stereotypical things we see Brits say in TV shows and movies, though rarely so in real life. However, she manages to ease into it quite easily without much of a problem. I don’t think I could adopt a convincing British accent as quickly as she did, ditto for the American accent. We still see some Brit actors having issues when transitioning to an American accent (cough cough, Benedict Cumberbatch as Doctor Strange). But I guess plausibility is not the thing to look out for in a movie with Princes and fictional countries.

The Two Romances Plots are Not Very Balanced

I think it is difficult to expect a balanced narrative when there are two romance plots at play, since one is bound to trump the other. This is the case for The Holiday, with Jude Law and Cameron Diaz getting more screen time than their fellow counterparts, played by Kate Winslet and Jack Black. The same thing happens in The Princess Switch, with Stacy and the Prince getting more romantic action than Margaret and Kevin. I guess this is because an ordinary girl being able to get a Prince is the stuff of dreams. Netflix is so obvious with this, even promoting A Christmas Prince within the movie! Yes, we get it Netflix, that’s what you think all women want.

Personally, I would have liked to see more of the romance between Kevin and Margaret. This would be interesting since Kevin and Stacy have known each other for a very long time, and both see the other as just a friend. So how then does Kevin go from seeing her as just a friend to something more? It is told to us quite a few times in the movie that Stacy is far too intense for him to like her romantically, hitting us over the head again and again that it is her personality that doesn’t speak to him, rather than her looks. It is a complex thing I feel, to start seeing a friend you have known for years in a more romantic light. Why does Margaret fall in love with Kevin, besides him being a normal guy to suit her normal girl fantasies? We never get the answers to this. 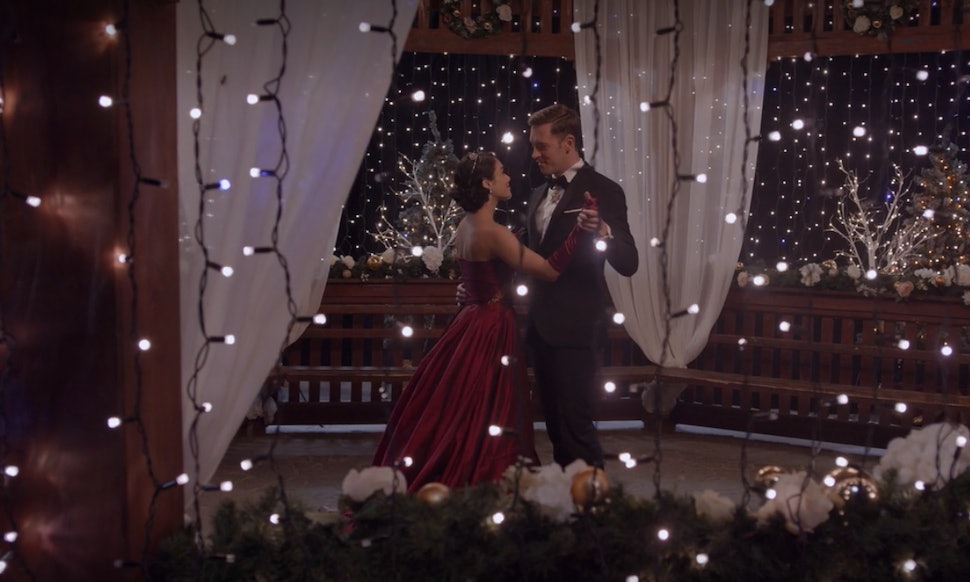 On screen, Stacy and Prince Edward come across as a better match. She challenges him and pushes him outside his comfort zone, calling him out on certain gender stereotypes that he imposes on her — that a woman shouldn’t concern herself with affairs of the state or any masculine space. Edward allows himself to grow and flourish under her guidance. Hudgens also has a bit more of a spark with Palladio than Sagar, so that might have played a role in the direction of the movie.

In any romantic movie, a complication must arise. This is necessary if we want the audience to feel that the couple have earned their relationship and love with each other. The movie creates moments of seeming complication, with the King (Pavel Douglas) suspecting something amiss with the Duchess’ behavior after the swap and asking one of the staff (Mark Fleischmann) to keep an eye on her. This never really goes anywhere, though there are moments when we think he has caught her.

Both Edward and Kevin handle the revelation a bit too calmly. There is no feeling of betrayal, or uncertainty, just a smooth path to happily ever after. I don’t think I could easily wrap my head around such deception, despite how I might feel or the reasons behind why both Stacy and Margaret participated in this. These men are just too gallant to be regular men.

I am still not won over by any of the Netflix Christmas Romances so far. If I wanted to watch a movie that does what The Princess Switch does, I would watch The Parent Trap and The Princess Diaries again. Those are romantic movies done right, and I have yet to find a Christmas Romance that tops While You Were Sleeping. Netflix needs to think more in terms of what they did for Set It Up and To All the Boys I’ve Loved Before, with good characterization and certain parts that defy expectations — in a good way.

Netflix is showing no sign of slowing down though, with the sequel to A Christmas Prince waiting in the wings to air on 30th November 2018. Sadly, I will most probably watch it, even if the set-up feels too much like The Prince & Me 2. I watch way too much romance movies for my own good, but hey, it’s like The Beatles say, “all you need is love”, and I am too much of a sap to say otherwise.

Thank you for reading! What are you thoughts on The Princess Switch? Comment down below!

The only reason I might watch this is for Vanessa Hudgens.

HAHAHA! I think all of us would have the same reason for watching this. She really is so lovely.

Lol I watched this with my sister and it’s so cheesy and unrealistic like you said but that’s what Christmas movies are supposed to be like. I’ll agree though that it doesn’t hold a candle to While You Were Sleeping, which I love with all my heart!

Yesssss!! Finally I have met someone who agrees with me about While You Were Sleeping! Sandra Bullock should just keep doing romantic movies, she is so goodddd.

I probably wouldn’t have watched this movie if not for Vanessa Hudgens.